Posted on 6 September 2013 by Cavershamragu 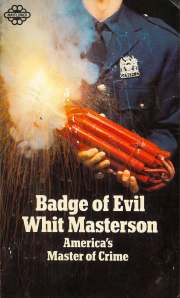 The team of Robert Wade and Bill Miller produced nearly three dozen crime novels between 1946 and 1961, mainly as  ‘Wade Miller’ and (in hardback) ‘Whit Masterson’. Badge of Evil served as the basis for the Orson Welles classic Touch of Evil, though the two differ considerably. It is a story of police corruption, local politics, murder and suspense – and begins with a very big bang …

I offer the following review as part of Bev’s 2013 Vintage Mystery Challenge in the ‘Book to Movie’ category; the 2013 Book to Movie Challenge at the Doing Dewey blog (for review links click here); and Patti Abbott’s Friday’s Forgotten Books meme at her fab Pattinase blog.

Quinlan, hunched over his bowl of chilli, snorted. “Just give me a free hand in the interrogation and I’ll prove it all right.”

Rudy Linneker owns the local lumber business and is pretty much the richest man in town – and one night several sticks of dynamite are lit and thrown into his home, reducing it and him to dust. His daughter Tara becomes the prime suspect after arguing with her father about her marriage to lowly shoe salesman Delmont Shayon, who has a chip on his shoulder the size of a Buick. Mitch Holt, the assistant DA who just successfully prosecuted the head of the Buccio clan, is assigned to the case and veteran detective Leron McCoy is brought out of retirement to help his old sergeant, Hank Quinlain, bring the case to a speedy resolution. And this they do when they find more sticks of dynamite in Shayon’s closet. Holt gets ready to finally go on holiday to Mexico to visit his wife “Connie” Consuelo’s father 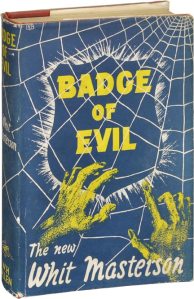 in Ensenada but he has a lingering doubt – after interviewing Tara and the Delmont he was pretty sure that they were innocent and as they had a very solid alibi begun looking among Linneker’s disgruntled ex-employees for suspects. The case seems solved but when he tracks down an employee who held a grudge after being fired, the man promptly confesses, saying he wouldn’t want anyone to be blamed in his place. This of course makes Holt into a hero in his department – but pretty unpopular with the police in general and Quinlan in particular. McCoy though, an old pro, takes it all in his stride. The only sticking point is how those incriminating sticks of dynamite got into Shayon’s apartment …

“You were right, Connie, and everybody else is wrong. Tara and Shayon didn’t do it”

Holt comes to the conclusion that the evidence must have been planted – and ultimately realises that it must have been Quinlan, probably with McCoy’s help. This is when the story really kicks into high gear as Holt becomes a local pariah since his allegations could lead to dozens of old cases being classed as unsafe – the police close ranks, Holt is suspended, his old friends and colleagues turn their backs on him – and when ultimately he goes to the press, he loses his job. But Holt won’t quit and before long his briefcase is stolen, he gets shot at and then his wife is arrested. She was lured to a hotel and drugged and then the scene was made to look like she was a marijuana user, all to discredit Holt. Are McCoy and Quinlan really behind this personal vendetta and if so, how far will they go to protect themselves? And will Holt give in to pressure? The book is at its best when Holt 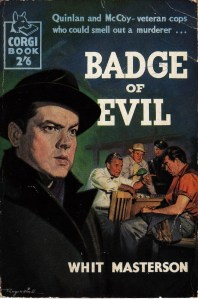 is on the back foot, depicting the changes in his friends and colleagues as he tries to get them to examine the evidence has uncovered with great vividness. Having said that, Holt himself is a bit of a boy scout (he doesn’t drink, is incorruptible, apparently has no political ambitions underpinning his actions), which make him a bit dull. The resolution, while taking an interesting turn in terms of ‘flipping’ one of the characters on to Holt’s side, is ultimately just a bit too pat. In the movie Holt was turned into a Mexican national, Miguel “Mike” Vargas and is a much more interesting character not least because Welles turned a minor subtext of the book – racism against Mexicans – and turned it into a major theme.

“Frozen in a crouch, like an animal at bay, Holt waited for the bullet that would kill him”

I previously looked at the film in greater detail here but comparing it against the book is truly enlightening. Most of the most memorable scenes (the opening tracking shot, the long interrogation culminating in the discovery of the dynamite, the sequences with Dennis Weaver at the motel that prefigure Psycho) as well as the racial dimension all belong to Welles – as do most of the memorable characters like Weaver’s eccentric motel manager, Akim Tamiroff’s gang boss with an unruly wig, Valentin de Vargas’ menacing henchman Pancho and of course Marlene Dietrich’s Tana, an old friend of Quinlan’s who gets to speak his celebrate epitaph (“He was some kind of a man”). On the other hand, most of the plot does come from the novel, including the dynamic climax with Holt spying of Quinlain and McCoy (Menzies in the film) via a hidden microphone. It is also intriguing how the outcome of the case has been changed for ironic effect (in the movie the police actually frame the right person – well, probably). Janet Leigh’s role as the wife framed for drug offences has been greatly expanded, though many of the shots at the hotel, where she is seen reclining in her negligee, are sheer cheesecake and really belong in a different movie. 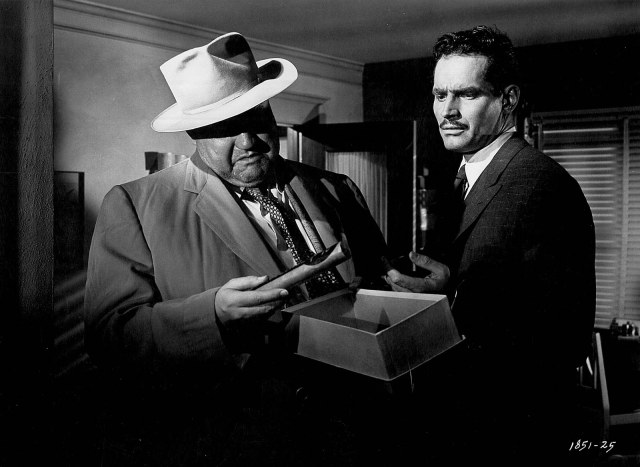 The film is beautifully shot if very dark (in every sense, especially the scenes of the murder of Tamiroff’s character and Leigh’s victmisation at the motel), full of amazing compositions and is bolstered by some very fine performances, none better than Joseph Calleia as Menzies, who in a reversal of the McCoy character in the book, is the one who slavishly follows Quinlan’s lead and truly mourns the end of their friendship. Touch of Evil is now available in three versions – the truncated 1958 theatrical release that Welles greatly objected to as it was re-edited; a pre-release version unearthed in the 1970s that is longer and closer to his wishes but also has more of the material shot later by Harry Keller; and the 1999 version supervised by Rick Schmidlin and edited by Walter Murch, which removed the titles and theme music from the opening tracking shot and returned much of the editing to Welles’ preferred intentions (albeit based on the Studio cut of the film, not his own, which was never in fact completed). This is probably my own preferred cut.

For a detailed look at the books of Miller and Wade, visit the Mystery File resource here.

Video Availability: All three version of the film are available on DVD and in the UK on Blu-ray too. The Blu-ray offers an improved image transfer and also the opportunity to watch either in widescreen or full frame – the latter is usually the most effective though both have their own virtues at the widescreen framing does also undeniably add impact. All these packages offer separate audio commentaries for each version of the film – the best is undoubtedly the one found on the 1970s version by expert critics James Naremore and Jonathan Rosenbaum, for this blogger the two most foremost authorities on Welles.