A CLOSED BOOK by Gilbert Adair

Posted on 3 February 2011 by Cavershamragu 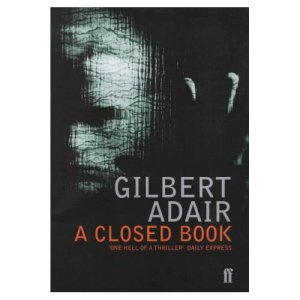 Gilbert Adair is a postmodern novelist, which in his case means that much of his work riffs on previous publications to such an extent that the reader’s response to, or enjoyment of, it will be conditioned and directly proportional to a) how well they know the works of Proust (The Key to the Tower), Thomas Mann (Love and Death in Long Island) or even Agatha Christie (the Evadne Mount series) and b) their willingness to forego a certain degree of emotional attachment in the place of a more rarefied intellectual response.

Adair’s affection for the detective genre, especially its Golden Age variant, is perfectly understandable if one considers how playful the genre could get in the 1920s and 30s, which comes across particularly forcefully in his Agatha Christie pastiches featuring Marple-like detective Evadne Mount. In And Then There Was No One, the third and seemingly final of his series featuring Mount, Adair seems to take recursive fiction about as far as it can go and yet tries to hang on to the vestiges of providing a genuine genre entertainment on top of his carefully calculated critiques and ironies about authors, criticism detective stories, the publishing industry and much more besides.

However, the book of his that so far has really come closest to creating something new within the detective genre without forgoing his postmodern intention is A Closed Book (1999), which has a strong plot, a good payoff and a very clever twist in its tail, one that to work relies on how readers will interpret the way that text can be printed on the page.

It is primarily a tale of psychological suspense rather than a detective story, in the style of the celebrated Frances Iles’ novels Malice Aforethought (1931) and Before the Fact (1932), later filmed by Hitchcock as Suspicion (1941). Sir Paul is a wealthy, celebrated author who has become a recluse following an accident in which he was blinded. Looking to write one more book, an autobiographical work, he hires John Ryder to become his live-in helper for a year to act as his eyes and produce the manuscript.

One of the innovations of the book is that to try to replicate Sir Paul’s blindness, the story is told entirely through dialogue with no descriptions – so we rely completely on the words as spoken and reported or Sir Paul’s unspoken thoughts which are represented in italics in separate paragraphs. If anything is described it is done purely through dialogue so the effect is very much like a radio play – indeed, the book could work extremely well if adapted that way.

The novel eventually develops into a cuckoo in the nest story as it becomes clear that John is deliberately misleading Sir Paul and it doesn’t take long before we start to suspect that he harbours murderous intentions. There is one scene towards the end that is sexually explicit and disturbing but doesn’t feel gratuitous as it serves to anchor the admitted artificiality of the story in the pain of a very real personal tragedy as the direct result of human cruelty. A Closed Book is probably my favousite of Gilbert Adair’s postmodern dalliances with the crime genre I discuss some of the others here) and remains suspenseful throughout its 250 pages right to its end, leading to an especially clever twist in the tail which surprises even though quite fairly prepared for. It won’t be for everyone, but is a pretty singular novel in conception and execution – no mean feat after 150years of development in the genre.

This entry was posted in Agatha Christie, Gilbert Adair. Bookmark the permalink.

7 Responses to A CLOSED BOOK by Gilbert Adair