Whether you consider it to be a fully fledged genre or more of a style or movement, Film Noir is unquestionably one of the most popular and certainly one of most discussed modes in cinema.

The traditional view locates the classic film noir period between the release of John Huston’s 1941 version of The Maltese Falcon and Orson Welles’ Touch of Evil in 1958. In between come several hundred moody crime movies, virtually all of them in black and white – the best-known exceptions being the breathtakingly TechniColored Leave Her to Heaven (1945) and the more muted Slightly Scarlet (1956), courtesy of chiaroscuro maestro John Alton – and usually renowned for their downbeat stories of lost souls facing annihilation in a brutally deterministic universe, one governed by a seemingly implacable and Darwinian set of principles in which the strong attempt to exploit and destroy the week. Quite often this is aligned with images of urban desolation filmed in an expressionistic style, one that favours low angles and chiaroscuro cinematography, to evoke an atmosphere of unease and instability.

In Film Noir men are often depicted as weak and obsessive, unable to resist their urges for money, power and sex while women are often depicted as murderous and double-crossing ‘femme fatales’, embodying what many now see as an anxiety about female empowerment and independence, reflecting accelerated changes in the domestic sphere during the Second World War. The classic examples of this, all of which helped jump-start Film Noir’s popularity, include Mary Astor as the two-timing Brigid O’Shaughnessy in The Maltese Falcon,Claire Trevor as the sexy blonde with a deadly past in Murder, My Sweet (1943) and Barbara Stanwyck as the manipulative, anklet wearing Phyllis Dietrichson in Double Indemnity (1944). You can get a flavour of film noir, and what aspects of it that so many people respond to, in this loving mashup:

The Endless Night: A Valentine to Film Noir 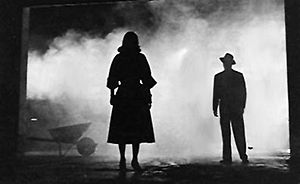 The huge success of Double Indemnity probably did more than anything to bring Noir to the fore as a commercially viable approach to storytelling, one that would be increasingly combined with a darker worldview, one informed by a post-war mood that questioned the established order as men and women found it increasingly difficult to fall back into the lives they had led before the conflict. In addition, advances in filmmaking techniques made shooting out of the studio and on location easier and cheaper and helped give audiences something different and more realistic even as the stylization of the monochromatic cinematography was becoming ever-more elaborate, helping to project a more in-depth approach to character’s psychology and motivation. The style was also used for biopics and westerns and of course is also to be found in films made outside of the USA – the focus here though is on those made by Hollywood companies, whether set in LA, New York or anywhere in between.

This page includes an index to my posts and reviews of includes examples from the most seductive of movie genres: