Posted on 21 November 2017 by Cavershamragu 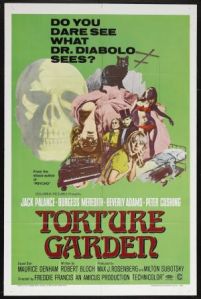 The great Robert Bloch (1917-1994) supplied stories and screenplays for six films made by Amicus Film, the only serious rival to Hammer in the 1960s and 70s when it came to horror cinema. The first three – The Skull (1965), The Psychopath (1966) and The Deadly Bees (1966) – were all directed by Freddie Francis and Bloch considered them a bit disappointing (I quite like The Skull myself). He was a little happier with the fourth and final Francis collaboration, Torture Garden, an anthology (an Amicus speciality) adapted from four of Bloch’s tales.
I submit this review for Todd Mason’s Tuesday’s Overlooked Movie meme at his fab Sweet Freedom blog.

“Do you dare see what Dr. Diabolo sees?”

Bloch was supplied with the basic circus setting and premise – in which Dr Diabolo (a restrained Burgess Meredith) offers to let customers confront horrors that may lie in their future – by producer Milton Subotsky, around which the author then added scripts based on four of his pre-published stories. In his autobiography, Once Around the Bloch (1993), he felt that the film came out 50% successful, feeling only really pleased with the second and third segments – this is how he put it:

“Two of the stories remained substantially unchanged and were, I thought, fairly effective. The opening and closing items had been ‘improved’ by the kind of cosmetic touches you might expect after turning a plastic surgeon loose on the Mona Lisa.”

Enoch (first published in Weird Tales, 1946)
Starring: Michael Byrne, Catherine Finn, Maurice Denham, Niall MacGinnis
The first segment is taken from a strong early tale told in the first person by a man who comes to believe that he is being driven to murder through possession. On film the subjective POV is junked so that all ambiguity is lost. What we have instead is Michael Byrne as a nasty piece of work who lets his uncle die to look for his money but unleashes the evil spirit trapped inside a homicidal cat. Byrne gives a great performance and this is probably the nastiest of the stories, but is not otherwise a great kick off for the film as its rather blunt approach does lack nuance (shall we say) and it is easy to see why Bloch felt let down.

Terror Over Hollywood (Weird Tales, 1958)
Starring: Beverly Adams, Robert Hutton, Nicole Shelby, Eddie Storm
One of Bloch’s somewhat acidic looks at tinseltown, we see Beverly Adams scheme her way to get her shot at movie stardom – only to learn that there is a truly terrible price for becoming a screen immortal. Adams deserves credit for playing the character without an ounce of vanity and yet, when the horrible climax arrives, we still feel maybe a twinge of sympathy for her. This was to be pretty much her last movie role for over a decade.

Mr Steinway (Fantastic, 1954)
Starring: John Standing, Barbara Ewing, Ursula Howells
A story about a killer piano (yes, you read that correctly), this is actually something of a Bloch specialty in its tale of a young man who was smothered by his now dead mother, a woman who know haunts him in murderous ways … On film Francis manages to make this not seem too silly by having his performers play it all completely straight and with a great set for the piano room, all vertical black and white lines, presided over by a sinister painting of the matriarch who has possessed the grand piano of her concert pianist son and who becomes jealous when he falls for a journalist (Barbara Ewing). The story doesn’t have far to go, but gets there perfectly efficiently.

The Man Who Collected Poe (Famous Fantastic Mysteries, 1951)
Starring: Peter Cushing, Jack Palance
This is probably the best story in the film, though it does play oddly with Palance cast as the pipe-smoking British Poe fan and Cushing as the US based collector. They are both great in the film, and yet quite clearly the roles should have been reversed. The lead into the concluding wrap-around is fairly well done, though is a tad illogical and is certainly not as neat as the original story. 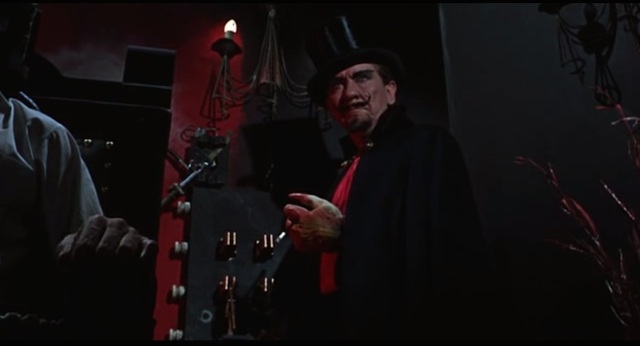 Overall, the film has a lot going for it – Burgess Meredith and Jack Palance prove to be more than just the two main American draws on the marquee, giving subtle and understated performances that pay off well in the finale. Cushing is of course terrific but just as good are the less eye-catching turns of beloved character actors like Michael Ripper and Ursula Howells, who as always prove to be impeccable. Francis handles it all with his usual panache, making good use of modest but adequate production resources. On the whole I would have to say that, compared with Torture Garden, I prefer the two subsequent anthology films that Bloch wrote for Amicus (both previously reviewed at Fedora: The House That Dripped Blood and Asylum), benefitting as they do from better integrated wraparound storylines; and, it has to be said, with the sole exception of The Man Who Collected Poe, more distinctive Bloch tales as their basis. But Torture Garden is highly entertaining and has just been made available in a superb Blu-ray by the new Indicator company in a region free edition that will play on all machines.
The Amicus horror anthologies 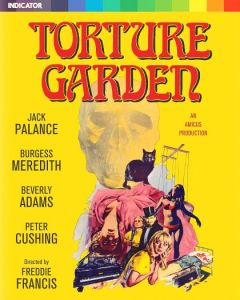 DVD Availability: The film has been released at various times on DVD in Europe and the US. It has now been made available in the UK on region free Blu-ray in a superb edition that includes all-new extras including brand new interviews with Ramsey Campbell (on Robert Bloch) and Kim Newman (on Amicus); a superb archival interview with the late Freddie Francis; the longer TV edit made for the US (and which I prefer as it clearly up various plot points without seeming padded) and as a terrific booklet that features a new essay by academic Laura Mayne.