Posted on 27 October 2017 by Cavershamragu

This omnibus by ultra-prolific paperback writer ‘Carter Brown’ (in private life Alan Geoffrey Yates) – courtesy of those very nice people at Stark House Press – features the first three cases of Al Wheeler, the unorthodox and wise-cracking Lieutenant working in the California police department of (the fictional) Pine County, not far from L.A.

“Wipe the lipstick off, Lieutenant. It looks sort of silly on a cop.”

We are in the mid 1950s, a time when in paperback fictionland young hero cops were either irresistible and allowed to break every rule on the book or thoroughly  corrupt and the tools of unscrupulous gangsters and their usually thoroughly deadly but very gorgeous molls. This trio of Brown adventures features both!

“A guy who knows Deirdre Damour that well,” he said, “is just wasting time being dead.”

This was the first in the series that would ultimately run to some 50 or so volumes. In this one Al investigates the murder of a screenwriter of a western currently shooting nearby who made enemies of the cast and crew by writing a series of kiss and tell articles for a gossip magazine. Al right away knows that the cop who found the body is hiding something and soon there are dead bodies aplenty while our hero falls for the leading lady and pretty much every other dame in town.

“I was just sitting there minding m own business, when this guy dropped dead at my feet.”

Blonde Verdict first appeared in Australia in 1956 and eventually made its way to the US when Signet released it as The Brazen in 1960  but with a modified version of the text. This edition from Stark House uses the original version, though the saucy cover of the Stark House Press volume is taken the 1960 edition of The Brazen. In it Al investigates the murder of a lawyer after the man is scratched with curare. Before long his mistress and her lover are also bumped off in the same manner! Is the killer the lawyer’s merry widow, a Chicago mobster who recently arrived in town, or someone else? And what of the woman Al ends up proposing to?

“Someone’s throwing corpses around so fast I’d call a cop only I’d look sort of silly if I did.”

Al has just been promoted to the head of Homicide Bureau following his success cracking his previous case. This time round, he is called in when one morning the ‘social editor’ of a fashion magazine is discovered dead inside a safe, strangled with a pink nylon girdle, wearing his silk pyjamas with a rose inside his breast pocket! It looks like this might be the work of Satanists but before long the bodies really start to pile up when one of Al’s cops gets killed while on the case.

When I first got into crime fiction in the 80s I used to hunt hungrily for treasure in second-hand bookshops – and at the time would regularly fall over a seemingly endless supply of Carter Brown paperbacks. But I never picked them up because in those days I was a bit of a snob. Like the piles of books by the likes of John Creasey (and his two dozen pseudonyms) and ‘Hank Janson’, et al, my reasoning seemed pretty sensible – with such a gigantic output, how could the books could really be any good? But I’m here to tell you that after this omnibus, I am a ‘Carter Brown’ convert! Sure, they may lack the hardness of Hammett, the poetic profundity of Chandler and the existential angst of Ross MacDonald, but this not what they aspire to.

“Who killed him?” Hanlon asked. I shrugged my shoulders. “One of the three of them. Two of them are dead, so I say it’s the third who killed him.”

These are fast-paced and very humorous mysteries that succeed completely on their own terms. Sure, the sexual politics are pretty creaky – every woman a beautiful-looking doll seemingly just sitting around waiting to fall into Wheeler’s arms (even the femme fatales) – but because of the high level of humour it is really hard not to enjoy them as the vintage pieces that they undoubtedly are. And while Al is a bit of a babe magnet, he is often left by his lady friends to fend for himself and listen to his jazz collection alone when he stands them up for the millionth time.

If kisses can burn, Janice was a forest fire.

The stories admittedly do tend to be a bit repetitive, with Al’s unorthodox methods in all three of the novels getting him suspended from the force (in Delilah was Deadly he even whines about it: “Did you or did you not,” I said as evenly as I could, “fire me the other day?”) so he can crack the case on his, usually finding a femme fatale and a crooked cop along the way. However, the sheer brio of the storytelling makes you not give a damn about that. Probably not good for your liver (or your cholesterol), but these highly amusing mysteries, which were only ever meant to read at top speed and not taken even remotely seriously, are really great fun, especially as and at this point in the series the language was mild, the violence restrained and the sex off-stage.

To find out more about the author and his books, you should visit: http://starkhousepress.com/brown.php

George Kelley provided a nice overview of these books over at his blog here, though please note that the omnibus was originally going to include The Blonde (1956), which will now appear in a later volume and has been substituted with Delilah was Deadly, which may be the most fun of all three actually just for its depiction of the fashion industry.

I submit these three reviews for Bev’s Golden Age Vintage Mystery Scavenger Hunt in these categories: ‘jewellery of any sort’ (Wench); ‘a door’ (Delilah); and ‘a redhead’ (Stark House omnibus). 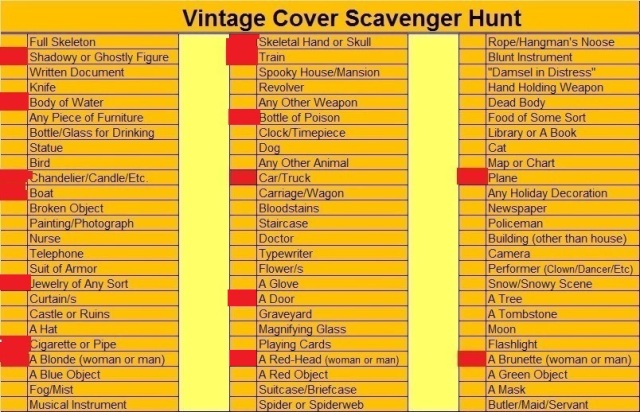