Given the title and the fact that it was the fiftieth entry in the 87th Precinct series, it is possible, just maybe, that this was envisaged as the last one – or maybe McBain was just toying with us. Certainly, this novel proved to be the end of the road for informant extraordinaire Daniel Nelson, aka Danny Gimp, a fixture since 1956’s Cop Hater, the first volume in the series.

… Danny was already dead when Carella knelt beside him.

I offer the following review for Friday’s Forgotten Books meme run by Patti Abbott at her fab Pattinase blog.

Carella wondered what happened to those simple cases where you walked in and found a guy with a smoking gun in his fist and a bloody corpse at his feet.

We begin in late October and Steve Carella just celebrated his 40th birthday earlier that month (as in several books in the series before, in passing October 15 is referenced as the birthday of great men, which it well might, given that it was the birthday of  Salvatore Lambino, aka Evan Hunter aka Ed McBain). In total we will be investigating three crimes, which may or may not actually be connected. The first involved the apparent death of a heart attack of an elderly man whose body was discovered by his daughter. Only this later turns out to have been a suicide that she tried to disguise. And then the case really gets complicate when the powerful sedative Rohypnol (the so-called ‘date rape’ drug) is found in his system …

There was enough bitterness and bile in Betty Young to corrode the hull of a battleship. 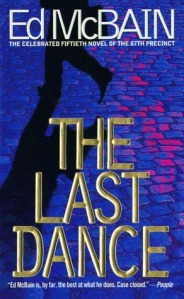 Carella turns to his confidential informant Danny Gimp to find out who may have killed the old man and tried to make it look like suicide (before the daughter tampered with the evidence). But before Danny, who has long considered himself to be Carella’s friend, can reveal the name of the hitman, he is gunned down by a pair of men while the two were meeting at a pizzeria. Carella handles the death pretty well and McBain avoids any over sentimentality, though this is in fact one hell of a shock and Danny had appeared in a great many books in the series, all the way back to the first. In fact, his exit is perhaps just a little under-reported, in my view. Either way, the two killers are found when the girlfriend of one of them snitches on him. And then his partner is beaten up in jail by two very nasty policeman, instigating something of a race riot courtesy of an Al Sharpton style preacher, Revered Gabriel Foster. The one of Foster’s staffers is raped (leading to a nice cameo for Annie Rawls), and then another murder is committed. Race relations was a theme that McBain returned to time and again throughout his later books in the series, so it is nice to report that at least Bert Kling and his African-American girlfriend, Sharyn Cooke, are still together.

The consistent thing about Ollie Weeks was that he hated everyone regardless of race, creed or color. Ollie was a consummate bigot. Without even knowing it.

Then Fat Ollie Weeks enters the fray, investigating the stabbing of a stripper in the 88th Precinct, who also seems to have been drugged with Rohypnol before being murdered. Was it the same person who killed the old man? And what is the connection with a new Broadway musical? This last element, involving copyright ownership of underlying rights to a musical property based on a previous play, is an original one for McBain and one that, professionally speaking (copyright is a big part of what I do at work), I found very amusing. Despite the fairly dark and convoluted matter involving the various physical and sexual assaults and multiple murders (the book features 4 killings and three murderers as well as assorted co-conspirators), there is always room for humour in McBain – in this case, when get several in-jokes such as a reference to High and Low, Kurosawa’s classic 1963 film version of McBain’s 1959 opus, King’s Ransom, as well as McBain’s romantic novel Strangers When We Meet, published as by ‘Evan Hunter’ (which was also filmed, in 1960, with a screenplay by the author).

And then detective Hal Willis gets shot and his fate is left unclear even by the end, just as a race riot starts to kick off … so I’m glad to say that this did not turn out to be the last in the series, after all. The saga would continue Money, Money, Money (2001), which as we shall see proved to have a tragic prescience all its own …

You can check out my reviews of all the previous volumes at my 87 Precinct microsite.