Posted on 2 May 2017 by Cavershamragu

This film marked the final (re) appearance of Professor Moriarty (or, rather, as credited, ‘Moriarity’) in the Universal Holmes and Watson series, this time in the chilly, smooth-tongued form of Henry Daniell (who was said to be Rathbone’s favourite). And this time he is behind a particularly gruesome series of murders,

Professor Moriarty: Holmes has one weakness, his insatiable curiosity. If you can rouse that, you can lead him anywhere.

The following review is offered for Todd Mason’s Tuesday’s Overlooked Film meme over at his fab Sweet Freedom blog.

Universal Sherlock Holmes # 9
Conan Doyle Source: not canonical
Sample dialogue: “I smell the faint sweet odor of blackmail!”
Original filming dates: 13 January to 5 February 1945
Sherlock in disguise: no
Universal’s Baker Street Regulars: One of the joys of this series is spotting the appearances of the various members of the stock company of supporting actors who appeared throughout the series in a variety of roles, sometimes as villains and sometimes as victims. In this one we have: Hillary Brooke, Henry Daniell and Paul Cavanagh (all in their third and final roles for the series); Frederick Worlock (third of his six appearances in the series); and Olaf Hytten (fourth of his six appearances in the series).

Originally announced as Invitation to Death, the original screenplay dealt with the murder of young girls who then severed their forefinger as a souvenir though the age of the victims was amended to appease the censors.

Sherlock Holmes: If we could just trace those missing fingers!
Inspector Gregson: If we could only drain the English Channel, we might find a penny.

It remains a gruesome premise, though it is largely forgotten once Holmes zeroes in on the scheme of mesmerist Lydia Marlowe (played by Hillary Brooke in the best of the three roles she played in the series).

The first half of the film is, on the whole, extremely successful and in its sombre way provides a fine contrast to the entertaining but intrinsically disposable tomfoolery of the previous film in the series, House of Fear. In the opening scenes, in which the fourth female victim of the ‘finger murderer’ is found, the bumbling Watson is kept off screen, while Lestrade is replaced by Inspector Gregson (played with nice understatement and surprising emotion by Matthew Boulton). It eventually transpires that the series of murders, likened to the Jack the Ripper case, is part of a blackmail plot that, to be honest, feels like one hell of a comedown for the ‘Napoleon of crime’!

Although not officially based on a Doyle story, there are certainly elements taken from ‘The Adventures of the Empty House’ (1903), the attempt to assassinate Holmes by a sniper, and ‘The Adventures of the Dying Detective’ (1913) in the finale when Holmes pretends to have been hypnotised and in the control of the villains,. Even better though is the use of the following dialogue exchange, taken from ‘The Final Problem’ (1893), the only story in which the Professor actually appeared: 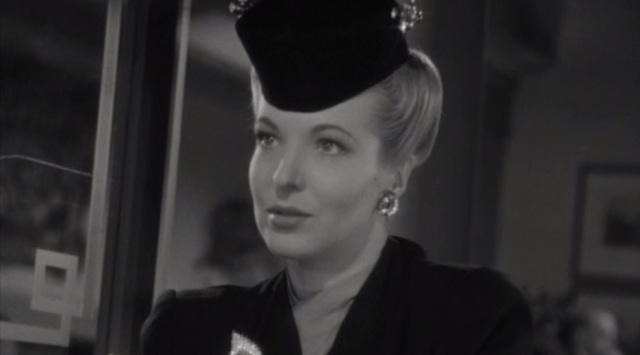 While the tone is quite dark, comic relief is found by Watson, most notably in a late sequence in which he is hypnotised and made to look a fool. Otherwise, the film really belongs to Hillary Brooke in the title role – indeed, it’s a bit of a shame that Moriarty is there at all to cramp her style, though he does get some choice dialogue exchanges with Holmes:

Professor Moriarty: We’ve had many encounters in the past. You hope to place me on the gallows. I tell you I will never stand upon the gallows. But, if you are instrumental in any way in bringing about my destruction, you will not be alive to enjoy your satisfaction.
Sherlock Holmes: Then we shall walk together through the gates of Eternity hand in hand.
Professor Moriarty: What a charming picture that would make.
Sherlock Holmes: Yes, wouldn’t it. I really think it might be worth it.

The finale, with Holmes seemingly about to throw himself off a high ledge while in a hypnotic trance, is not especially thrilling and in plot terms doesn’t make much sense; while the dispatching of Moriarty is also a bit dull really. Which is a shame because certainly for the first two-thirds of its 68 minutes this was really first-rate entertainment. Compared with the film that was to follow however, Pursuit to Algiers, it was an undoubted masterpiece!