DEATH IN THE CLOUDS (1935) by Agatha Christie

Posted on 3 February 2017 by Cavershamragu

I rarely review Christie’s books, mainly because her work is already so well covered out there on the blogosphere. But now that my amazing oldest niece (of two, by 12 minutes) is getting into crime fiction, its time for one of my rare posts on her work – but in fact, not by me at all as this is going to be a guest review.  She is already a GAD veteran, having read Carr, Marsh and Queen, but this is her first Christie, which I suggested for its clever plot, lack of scary bits and the international setting. But now, over to: Littlemisscrime47

We submit this review for Bev’s Mystery Scavenger Hunt; and don’t forget to check out Patti Abbott’s Friday’s Forgotten Books meme over at her fab Pattinase blog.

When a french moneylender is murdered aboard airliner the Prometheus from Paris to Croydon, nobody – not even passenger and renowned private detective Hercule Poirot – is beyond suspicion.

In an engaging and ingenious plot, we follow Poirot, Inspector Japp and Monsieur Fournier in their quest to unravel this cunning yet devilishly simple mystery that makes a suspect of them all. 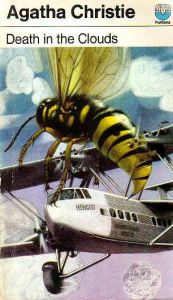 The case takes on an even more sinister turn when a native american blowpipe said to be the murder weapon is found nestled beside Poirot’s seat; the distinguished detective must undertake a fantastic journey through the streets of London and Paris if only to clear his own name.

Throughout the whole book Poirot’s views are infuriatingly cryptic – which wasn’t wholly unexpected – and in a confident explanation at the end, everything becomes exasperatingly clear, with all the subtle hints and startling revelations coming together neatly in a logical and engaging way that does not fail to impress.

We submit this review for Bev’s 2017 Golden Age Vintage Mystery Scavenger Hunt in the ‘plane’ category:

81 Responses to DEATH IN THE CLOUDS (1935) by Agatha Christie