Posted on 18 August 2016 by Cavershamragu 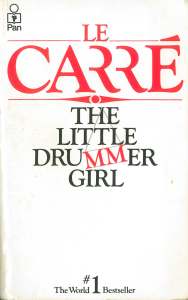 John le Carré remains a true perennial and an astonishing success story. Some 55 years from his debut, he is still a best-selling author and adaptations of his work, like the BBC mini-series of The Night Manager, are big ratings winners and critical favourites too. This spurred me and a friend of mine (lets call him ‘Giles Ladd’) to search through the le Carré back catalogue for one of his books that neither of us had read. We came up with Little Drummer Girl, which is set in the Arab-Israeli conflict.

“Who the hell are you? What do you feel inside all of those barbed-wire entanglements?”

This book was an instant bestseller, with a huge print run, a big movie sale and paperback rights sold to the US for $1 million. Coming off the success of the Smiley vs Karla trilogy, it originally began as another book about the Circus but quickly grew into something more topical and politically engaged. The protagonist is Charlie, a talented British actress in her late 20s with a rebellious streak, low self-esteem issues and a revolutionary background.

… she still found time to marvel inside herself at the paradoxes of a man who could dance with so many of his own conflicting shadows, and still stand up.

To me she sounds a lot like Vanessa Redgrave circa 1967 though the setting is the early 1980s – the inspiration was actually the author’s own half-sister, the actress Charlotte Cornwell. Charlie (actually a diminutive for Charmian) becomes the pawn in a very complex game being played by Kurtz (one of many Conrad references pointing to Heart of Darkness and The Secret Agent), a senior Mossad agent (known to others as Schulmann, Spielberg or Raphael) looking to destroy a PLO operative known as Khalil, who has been directing a bombing campaign against prominent Jews in Europe.

Briefly, they smiled, but not at each other.

This proves to be an extraordinarily elaborate plan, the ultimate aim being to place Charlie as a double agent within Khalil’s cell, which uses young European women to deliver their bombs. Kurtz dispatches his agent Joseph (aka Michel, aka Becker) to follow Charlie on her tour of the provinces in a production of Shaw’s St Joan, and then follow her when she goes on holiday to Greece. He starts a romance and then kidnaps her so Kurtz can break down her defences, and get her to work for them as just the kind of person the PLO cell would recruit. This is where the novel becomes truly fascinating and most successful artistically, playing a subtle and ingenious game with the reader that matches Kurtz’ own machinations.

Actors, acting and spycraft’s variety of guises, secret identities and motives are used to create a remarkably rich and impressive sense of irony, as lie is built upon lie, matching an actor’s craft with that used by an agent to create a false identity. While the story has a proper beginning, middle and end, we never lose sight of the human dimension, and the losses on both sides of the conflict. Some attacked the book for being too critical of Israeli tactics, some for being too limited in its view of the Palestinian struggle, but as always the author stays away from a reactionary reading of any complex situation, always being critical of the establishment and the party line. Voices are heard from both sides, often in oblique and refreshing ways as various ‘actors’ try out their parts – and we are also left in no doubt of the problematic role and legacy of the British as the old colonial masters. The result is a fine, long, and politically complex work that repays close reading but which is also a very satisfying thriller.

I submit this review for Bev’s 2016 Silver Age Vintage Mystery Scavenger Hunt in the ‘shadowy figure’ category for the terrific penguin cover on a mysterious lone theatre patron: