POLICE AT THE FUNERAL (1931) by Margery Allingham 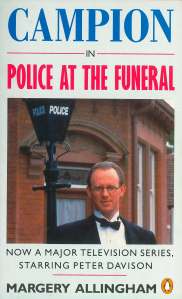 This is the book that many see as being the breakthrough for Margery Allingham in her series featuring Albert Campion, who after three comparatively ‘light’ adventures finally appeared in a darker, more substantial work that showed something like the true potential of its young author. Does this view of it stand up after 85 years? Well, two of my blogging buddies, Neeru and Santosh, both felt let down, bemoaning a conclusion that showed unacceptable evidence of racial bias that pretty much wrecked their enjoyment of the story. So I thought I’d give it another look …

“Am I a serious practitioner or someone playing the fool?”

The book concerns the venerable Faraday family of Cambridge that is so steeped in the past that they still go to church on Sundays in a horse-drawn carriage even though we are in the early 1930s. Ruling the roost is Caroline Faraday, a powerful remnant of Victorian society who dominates the rest of the clan, made up of Andrew (who has gone missing and is feared dead), the pompous William, the indolent and overweight Julia, the hysterical Kitty and the black sheep of the family, Uncle George. All of them behave like children, constantly squabbling, and are barely held in check by Caroline, who holds the purse strings. The one bright spark in the household is Joyce, Kitty’s niece by marriage, who is due to leave soon when she marries Marcus, the family solicitor, and an old friend of Campion’s. Initially called in to find Andrew, who disappeared shortly after rowing with William, who can’t account for his movements at the time (he claims to suffer from bouts of amnesia), Julia is soon found poisoned in her room, having drunk from a cup of tea brought to her by Kitty. Then William is attacked with a blade (though he claims it was only a cat) before George arrives to assert his rights over the family, leading to another death and the revelation of a surprise villain.

“I’m sorry about Uncle William,” murmured Mr Campion. “You haven’t seen him at his best.” 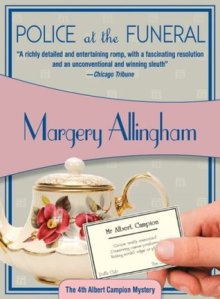 This is a pretty good whodunit (I didn’t guess the identity of the killer the first time round, though Allingham doesn’t exactly play fair when it comes to clues), though it is the depiction of the Faradays that impresses. There is a Poe-like gloom that hangs over Socrates Close and the book conveys well a sense of decay and instability about  the final dregs of a long family line seemingly weakened by a lack of new genetic material (shall we say). And this is where we get to the sticking point – in the penultimate chapter (mild spoiler alert), we learn that the reason why Uncle George was out of favour was that he was a ‘blackamoor’ – a half-caste, though this is not gone into in any detail. When I first read this I didn’t find the plot detail particularly offensive, partly because Julia, the one family member we truly like, sees this as not a relevant issue while Campion, when told of this, fights back the urge to comment, while instead imagining that this could have been a scandal, but only some sixty years before. On the other hand, when aligned with the sense that the Faradays are crumbling at a genetic level (one imagines that by now they must have what you might call, ahem, a rather narrow family tree), one can find this detail unpleasant. One imagines that Allingham was probably thinking of the secret from Jane Eyre as an inspiration, but I certainly wish that the detail were different. Having said that, and I don’t mean to let the author entirely off the hook here (as she never condemns the position either), though at least she does make it clear that such views belong to an antiquated past that is long gone. And it is interesting to note that this element was completely eliminated in the otherwise surprisingly faithful TV version …

“It”s queer,” he said guardedly. “I suppose this must be the last household in England of its kind?”
The girl shuddered. “I hope so,” she said. 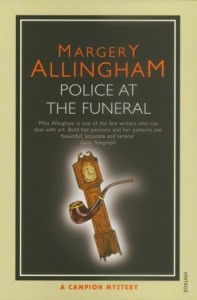 I think the always underrated Peter Davison was superb casting choice as the lead in Campion, a BBC show that as developed by John Hawksworth (who also developed the terrific version of Sherlock Homes starring  Jeremy Brett) did a marvellous job of retaining Allingham’s air of gentle irony and fantasy. The show very smartly managed to undertake the frequent tonal shifts from whimsy to deadly earnest with a great deal of panache, and Davison is key to that, impressing both in his comedic timing and as a man of action and mystery, a really tough combonation to pull off. Timothy West is especially good in this two-part dramatisation of the novel as the bombastic and foolish Uncle William, though it is Mary Morris, in her final screen role, who truly stands out as Great Aunt Caroline Faraday. The novel is followed extremely closely and most of the dialogue is retained too – a few things are simplified and the whole section dealing with the inquest in Uncle Andrew’s death has been eliminated. Otherwise this is extremely true to novel – though, as I mentioned earlier, Uncle George’s ‘scandalous’ secret is now merely that he was illegitimate, nothing more – and which I certainly preferred.

I submit this review for Bev’s 2016 Golden Age Vintage Mystery Scavenger Hunt in the ‘clock/timepiece’ category: 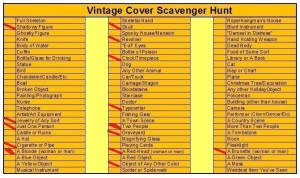 46 Responses to POLICE AT THE FUNERAL (1931) by Margery Allingham