Posted on 3 June 2016 by Cavershamragu

This omnibus volume brings together two distinctive thrillers by John Trinian (aka Zekial Marko), courtesy of those very nice people at Stark House Press. The first is set in San Francisco and is a classic tale of an ex-con who tries to go straight but is hounded by vengeful cops and his old criminal associates. Will he succumb to the temptations of the old life? The second is a bit more on the bizarre side, featuring a B-movie actor on the skids who inadvertently falls in with a Satanic cult in Hollywood …

“You’ve always been a sucker for Walter. It’s your only weakness. When Walter whistles, you come.” – from Scratch a Thief

‘John Trinian’ was the nom de plume used by the writer mainly known as Zekial Marko (1933-2008), though as confirmed in the fascinating (and decidedly ribald) introduction to this volume by his old friend Ki Longfellow (aka Pamela Longfellow, aka Baby Kelly), he was actually born Marvin Leroy Schmoker. For more information about the author, visit Mystery*File.

The corridor was straight, but no matter how hard he tried to follow it, the dragon leapt before him and forced him to walk crookedly. – from Scratch a Thief

Originally published as an Ace Double (paired with Chester Warwick’s My Pal, The Killer), at 128 pages Scratch a Thief makes for a terrific, breathless read. The basic plot is a retread of a classic trope of the crime genre – the thief who is brought out of retirement for one last job – but handles it with such verve and energy that it feels all new again. There are also plenty of distinctive touches here, not least the fact our protagonist, Eddie Pesak, is Hungarian and only 36, though he is already going grey at the temples after a tough childhood. Originally part of his brother Walter’s gang, after a stint in jail he has been going completely legit and only thinks about his wife Zara and their daughter Kathy. But Eddie is haunted by his own demon – or more specifically, Draco, a cop who was inadvertently shot during a holdup nine years before. Draco is sure it was Eddie but was never able to prove it. And even though Eddie went to jail (for another crime), and has been going completely straight for five years, Draco is obsessed, regularly arresting him on bogus charges and getting him fired from his jobs. Eddie and Zara have lived all their lives as part of the Magyar community of San Francisco and so won;t be driven away, even by the dragon that is Draco. This is Eddie back in the slammer again, realising how quickly the old life can come back to you (incidentally, Trinian/Marko also has a spell in jail):

It was as if he had never left this life with its cabalistic vagaries of the helpless, homeless, loveless; the night world of total fear and despair – from Scratch a Thief 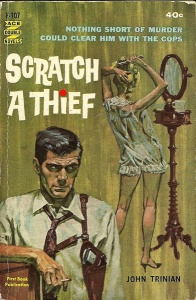 Draco has just arrested Eddie again and lost him his job, again, though admittedly this time the cop seemed to be on to something – a man was shot and the killer fitted not only Eddie general physical description, but was even driving the same car and was heard being called ‘Eddie’ by a witness. But that same eye-witness clears Eddie in a line-up, which is only right as he was indeed innocent. It is at thus precise moment that Eddie’s bother Walter descends with an offer of $100,000 for a heist. It is only a few days to Christmas (the whole story is set in the month of December), Draco has made it impossible for Eddie to keep a job or get a loan to tide them over, so he finally gives in and agrees to one last job – but things are not what they seem and while Eddie is cautious, the plan goes awry (of course), leading to much double-crossing and several murders. Told with plenty of pep and with its unusual setting, this is a highly satisfying read, always exciting and on the dark side, but not so bleak as to make you just want to give up in despair – we all need a little hope sometimes.

He was deeply convinced that greatness was his destiny. Immeasurable power and wealth were to ne his. All he had to do was find the right lever and pull. – from House of Evil

Of the two books in this volume, House of Evil is the rarer, so is very welcome, though it has to be said, it is also probably the weaker in terms of plot, though it still offers a fascinating read. It belongs to what was then a still comparative niche part of the genre, a crime novel about a religious cult. In the same year Margaret Millar in How Like and Angel had described a religious community with surprising sympathy and respect, but here we are much more in the carny world of Gresham’s Nightmare Alley (1946) and Boucher’s Nine Times Nine (which I previously reviewed here). Indeed, we know right from the start that the leader of the sect, known as Dr Zedek Kosma, is really con man Carey Ledbetter – trouble is, he has become both very powerful (having diversified into a number of activities, mostly illicit) and unhinged, convinced that the devil is truly due to make an appearance.

Someone had once remarked that God must have lifted three corners of the United States, like a huge handkerchief, and that all those loose pieces rolled down to settle in Los Angeles. – from House of Evil

Enter 29-year old horror movie  actor Paul Berko (modelled on Trinian/Marko himself), who gets mistaken for one of Kosma’s cronies, who is bringing a whale to The Retreat in the shape of movie star Martha Mason. In this den of iniquity where orgies are a regular occurrence (all dutifully filmed by Kosma for possible blackmail), innocence and purity is represented by 19-year-old Anne Woodbridge (based on Ki Longfellow), who starts to question the motives of Kosma, and as a result gets drugged and dumped into the great man’s bedroom for possible extracurricular activities. As in Scratch a Thief, there is an interesting subtext about people taking on different identities to fit into a specific environment, though here it is mainly seen as sheer Hollywood ballyhoo. Ultimately, as Paul realises quite how dangerous things have become he decides to do something about it rather than just bemoan his fate and drown his sorrows,  leading to a fiery climax in which Paul gets back some of his self-respect, vanquished the by now murderous Kosma and gets to rescue the girl using movie techniques. The end result is alight and amusing read, perfectly well executed, but lacking the vibrancy and energy that really marks out Thief.

I submit these two reviews for Bev’s 2016 Silver Age Vintage Mystery Scavenger Hunt in the ‘damsel in distress’ category (Scratch A Thief, the Stark edition ) and ‘two people’ (for the Pyramid edition of House of Evil):