Posted on 26 April 2016 by Cavershamragu

For many this is the best of the Holmes and Watson films made by Universal. It is certainly the most successful as a whodunit and possibly the darkest too. It was originally titled Sherlock Holmes in Canada and it is the only entry to be set entirely overseas, mostly taking place in the spooky little Quebec town of ‘La Mort Rouge’ (a reference of course to Poe rather than Doyle). Holmes and Watson are at a conference when they receive a telegram from Lady Penrose asking for help, but it arrives too late, so they set out to solve her grisly murder, the first of many.

Universal Sherlock Holmes # 6
Conan Doyle Source: not canonical
Sample dialogue: “Sit down, old fellow. Judge Brisson has decided not to shoot us.”
Original filming dates: Started filming on 10 January 1944
Sherlock in disguise: No
Universal’s Baker Street Regulars: One of the joys of this series is spotting the appearances of the various members of the stock company of supporting actors who appeared throughout the series in a variety of roles, sometimes as villains and sometimes as victims. In this one we have Gerald Hamer (3/5) as the postman with a tendency to hiccup when he has too much to drink, in easily the best role he ever had in the series (and possibly in the movies); Ian Wolfe (2/4) as Lord Penrose’s butler; and Paul Cavanagh, in the first of his three appearances, here as the stolid Lord Penrose, a believer in the occult (and a very big red herring).

Sherlock Holmes: Consider the tragic irony: we’ve accepted a commission from a victim to find her murderer. For the first time we’ve been retained by a corpse.

While no Doyle source was used directly, the obvious inspiration was The Hound of the Baskervilles with its swamp and misty ambience, a subplot about an escaped convict and the air of terror as a victims fall foul of an apparently supernatural creature that is already ripping the throats of innocent sheep. Holmes realises that Lady Penrose was really ‘Lillian Gentry’ (a name that is more or less a play on the Victorian celebrity and royal courtesan, ‘Lillie Langtree’), an actress who was involved in a murder several years before. The man responsible, Ransom, was jailed and thought dead – but what if he is still alive and in disguise, slowly enacting his revenge against those he believed responsible for his incarceration? Then it turns out that the judge who sentenced Ransom is also living in the village … So much for keeping the basic premise plausible! 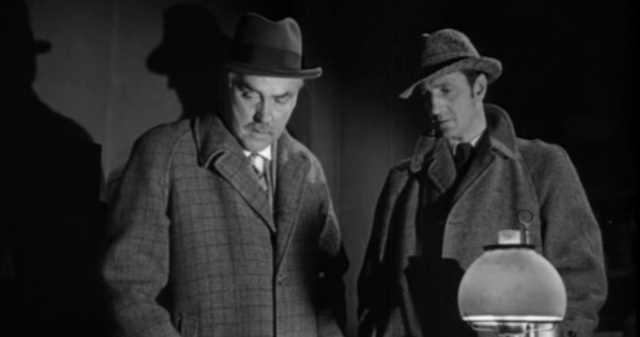 So, while the basic story is not that credible, how else does it compare with the other films in the Universal series? Well, although there is some silly comedy with Watson either falling into potholes or getting tipsy in the local tavern, this is a remarkably dark film, even a morbid one, which gives it a very unusual texture. The villain appears throughout in various disguises and most of these are (unusually) very convincing, especially in the sequence of the judge’s murder (thanks in part to a clever cheat that made me smile since it required the filmmakers to go the extra mile to fool the viewer). The damp, dank atmosphere of the little Quebec village where a creature of light stalks its denizens and animals is beautifully rendered by cinematographer George Robinson (his only entry, more’s the pity) and much of setting is incredibly eerie, such as the dilapidated villain’s lair where Holmes, unknowingly, meets his nemesis not once but twice. This was the only film in the series on which director Roy William Neill also took a writing credit and one can see why, because it really is something special in terms of its brooding atmosphere, ultra dark look and horrifying subject matter. I’ve tried not to say too much about the plot or characters as I think this one story that is well worth savouring if you are coming to it for the first time and I’d hate to spoil it – I guarantee, if you are a fan of these films, then you won’ forget this one.

For my dedicated microsite on the Universal Sherlock Holmes series, click here.

DVD Availability: Available in terrific editions on DVD and Blu-ray the world over, derived from the restorations made by UCLA. All look decent – some, such as The Scarlet Claw, look very good indeed.