Posted on 17 March 2016 by Cavershamragu 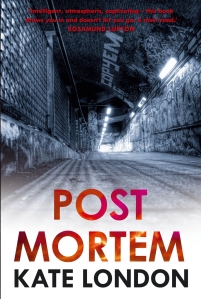 This crime novel has just been published in paperback and marks the debut of Kate London, who until 20014 was a member of the Metropolitan Police Service. I posted a short piece about the book a little while ago, offering a very short extract from it. But now, thanks to those nice people at Atlantic Books, I have been able to read the entire novel – and I’m glad to say that it’s a winner. Here’s the blurb, with my review beneath the fold:

A veteran cop and a 14-year-old girl die after falling from a London tower block. Then the cop’s partner, a witness to the tragedy, goes on the run. Now it’s up to detective Sarah Collins to find out why – but who can she trust?

“To your own self be true, Officer. We did our best. End of.”

Set across a two-week period in April, the plot bifurcates as we follow Sarah’s investigation in the present and the memories of Lizzie Griffith, the young copper who is now absent without leave. The two victim’s were Lizzie’s senior partner Hadley, a thirty-year veteran, and the young and impressionable teen Farah, who was apparently involved in a dispute with her neighbour that had escalated into the kidnapping of the five-year-old boy who Lizzie found on the rooftop. But is anything what it seems?

“Some memories we don’t like to contemplate even before they have happened.”

Collins inevitably comes up against resistance from both Farah’s family, resentful at the tragedy, for which they blame the police; and the Force itself, eager to protect its own against any claim of wrongdoing. But right away Collins finds several inconsistencies on both sides as it turns out that Farah’s father, currently in custody, was involved in an ongoing dispute with his neighbour, the mother of the apparently kidnapped boy. Why did Farah take him? And how did Hadley and Lizzie happen to reach the top of the tower block before anybody else? And why did Farah have Lizzie’s phone number on her? And what of the complaint that Farah’s family made against Hadley, claiming that he used racist slurs against them? While this is perhaps a bit predictable, there is a lot more to this story. For one thing, while we know that the two strands of the narrative will eventually intersect, this only happens after traversing a sea of grey, thus ensuring that even when we have all the ‘facts’ we will be left with a strong sense of ambivalence about the characters at play and the contradictory impulses that drove them. The depiction of the police, as we might expect, is seemingly convincing, without relying too much on jargon and procedural detail. If I had to nitpick and find a flaw, then I would argue that the MacGuffin at its centre (which I shan’t reveal as we only become aware of its presence quite late on) is a slightly unlikely one given the circumstances in which it was generated – but London is smart enough to build this into the narrative so that even at the end we are left unsure just him important and plausible it really was (though in terms keeping the plot ticking over it is crucial) – rather, it is its possible existence that is important to the characters, even if we doubt it provenance.

This is an impressive debut, strong on story and character, its slow drip feed of information handled with considerable skill and subtlety, in the process also revealing a surprisingly steely and unsentimental core that seems to be one born of considerable experience. I don’t know if this is authentic or not – but it certainly feels like it.

This entry was posted in England, London, Police procedural. Bookmark the permalink.