Posted on 21 February 2016 by Cavershamragu

News reaches Fedora that a fourth series of Endeavor will go in to production later this Spring. The prequel to Inspector Morse starring Shaun Evans will be set in 1967 (as was series 3) and will again be written entirely by Russell Lewis, who devised the series (based of course on both the original novels by Colin Dexter’s as well as the earlier TV show too). How did the third series fare in comparison with the previous ones?

Series 3 saw a number of important cast/role changes, most notably the departure of Jack Laskey as DS Peter Jakes in episode 2 (which led to him being made more sympathetic, which I was not all that convinced by) and, at the end of the series, of both of the Thursday children, Jack Bannon’s Sam (off to the Army) and Sara Vickers’ Joan (whose exit was much more dramatic as Morse realised just how much she ,meant to him)  This series also saw the promotion of Sean Rigby’s Jim Strange to Detective Sergeant, who proved to be highly skilled at ‘playing the game’ and the deepening of Anton Lesser’s Chief Superintendent Reginald Bright, which was also definitely a good move.

James Bradshaw also returned as Dr Max DeBryn and Abigail Thaw as journalist Dorothea Frazil, though I felt not enough was done with them this time round. Most disappointing to me was the lack of presence afforded to Shvorne Marks as nurse Monica Hicks – she appeared in two of the episodes but no reference was really made to what happened to the romance between her and Morse in the previous series – why have her in it at all? If she returns (and I hope she does), I hope they make much more of this. 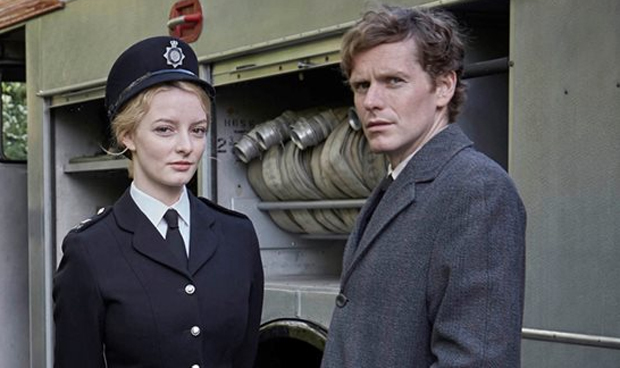 Otherwise the most noticeable addition to the cast was Dakota Blue Richards’ ultra smart and efficient WPC Shirley Trewlove, who is an awful lot like the Rachel Coles character played by Lisa McGrillis and introduced in the last two series of Inspector George Gently – I really hope they find her more things to do.

The latest series of 4 feature-length episodes was, by design, a real mixed bag tonally. The opening episode was a slightly bizarre mixture of The Great Gatsby and the The Conjuring, but worked quite well none the less, if you accept the oddness of the premise. The second episode was a bit of a mish-mash involving a supermarket chain, murder, kidnapping and a commune full of unresolved elements but worked best in its farewell to Jakes. The third story, slotting Strange into Jakes’ place, with Morse very much the junior member of the team, however was a ludicrous farrago. A bizarre mishmash of Peter Benchley’s Jaws, the Michael Douglas safari adventure The Ghost and the Darkness and Cornell Woolrich’s Black Alibi (by way of its film adaptation, The Leopard Man) that, with its extended climax, in which Morse and co are chased around a maze by a man-eating predator, can be said to have come perilously close to (ahem) jumping the tiger shark.

The finale, which had nice links to the classic Morse episode Promised Land, was much more satisfying and saw the show closing on a (comparative) high, with the issues surrounding the increasingly important Thursday family brought pleasingly to the fore. Overall, I wish this series had had more intellectual ballast as our hero was often just left to stand around in isolation and not really put his exceptional brain to work and did feel that it was mostly a step down from the previous editions of the show. Let’s hope it all improves next year!

For a highly amusing take on the first episode of this series, see what the Puzzle Doctor had to say over at In Search of the Classic Mystery Novel.