Posted on 9 February 2016 by Cavershamragu 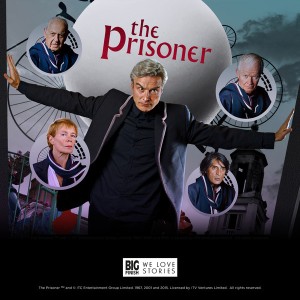 The following review is offered for Todd Mason’s Tuesday’s Overlooked AV Media meme over at his fab Sweet Freedom blog.

This celebrated, much-loved (and much debated) cult TV series has now been ‘re-imagined’ for audio by writer-director Nicholas Briggs, the head honcho (or anyway, executive producer) over at the Big Finish company, much of whose wonderful work I have previously profiled here. Here are the details of the four episodes:

Episode One: Departure and Arrival
A failed meeting in Belgium catalyses Agent ZM-73 to resign from his top secret post, but when he wakes the following morning everything has changed — even his name. Trapped in a bizarre coastal village, and with his every move monitored by the mysterious Number Two, the man now known as Number Six struggles to make sense of it all.

Episode Two: The Schizoid Man
Six finds himself fascinated by a strange bond which has suddenly developed between himself and Number Nine. But the next morning, Six wakes to find himself changed. A moustache, different hair, and… a new name. Number Twelve.

Episode Three: Your Beautiful Village
Something is very wrong, as Six experiences the most disturbing sense deprivation. Almost complete darkness, filled with haunting sounds, fragments of conversations, and a desperate call from Nine start to test his reason.

Episode Four: The Chimes of Big Ben
A new prisoner arrives in The Village. The woman is strong-minded, independent, and refuses to accept her new number — Eight. She is not a number, she is Nadia. And Six is convinced that she is his ticket out of The Village.

Episodes 1, 2 and 4 are imaginatively adapted from eponymous episodes of the original TV show, while episode three, Your Beautiful Village, is an original tale by Briggs that, to good effect, sets the story in complete darkness, which of course is perfect for audio. It also provides an ending that is both original and moving and more than justifies its place among adaptations of fan-favourite episodes.

The original series has retained its allure for its strong allegorical underpinning, its critique of the Establishment and surveillance culture, its irony and sense of the absurd and for its unwillingness to cater to the norms of standard TV storytelling (which were roundly lampooned in the finale that was meant to reveal all and which instead demolished all such expectations). Though explicitly set in 1967, Briggs has very sensibly updated both the (then) fancy technology (we now have clones, touch screens and taxis with personalised, DNA-controlled ignition) and the storytelling techniques, most notably by introducing an element of serialisation. This is seen at its best in the use of Sara Powell’s ‘Number 9’ whose story runs in parallel with that of ‘Number 6’ and so becomes a regular, even though we are not sure of her motives, as befits such a paranoid and existential show.

The famous theme music by Ron Grainer, and the incidental music score (composed by the likes of Albert Elms and Wilfred Josephs) has also been lovingly recreated by Jamie Robertson so that, like the rest of the project, we are reminded of the original but are none the less offered a new perspective on the material (having surveillance balloon ‘Rover’ be specifically identified as female is a nice touch) so that there will be plenty of surprises even for the most devoted of fans. Mark Elstob as Number Six is undeniably channelling McGoohan’s clipped tones and tendency towards barely contained hysteria but does a great job, while the various celebrity ‘Number Twos’ all have a great time. I particularly liked the one played by Celia Imrie, though there is something delicious reptilian about the sheer evil of Michael Cochrane in the fourth story.

“This place is a madhouse!”

This all works very well and I recommend this release unreservedly and wholeheartedly, both to fans of the original show and those who enjoy edgy and intelligent espionage fiction with a spiky sense of humour.

Availability: This release is available on CD or as an MP3 download. For further details on this series, and how to purchase on CD or download, visit the Big Finish site at: www.bigfinish.com/ranges/v/the-prisoner

17 Responses to The Prisoner – volume 1