Posted on 21 August 2015 by Cavershamragu 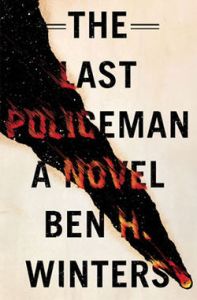 The apocalypse is a surprisingly frequent occurrence in fiction (and indeed can be seen to constitute its own subgenre), but admittedly not one often combined with the mystery genre. This was the major selling point of this Edgar-winning novel, the first in a trilogy featuring New Hampshire detective Hank Palace, newly promoted to Homicide. Realising his career ambition proves ironic as the promotion was fast-tracked when the world learned that an asteroid was only months away from a collision that will lead almost certainly to extinction for the population of the planet. Hank is desperate to solve murders just at a time when suicide is rampant – but wouldn’t that be a perfect way to cover up your crime?

This review doesn’t count really, but don’t forget to check out some of the great titles being offered for Patti Abbott’s Friday’s Forgotten Books meme over at her fab Pattinase blog.

This novel has been classed as science fiction, but only in the sense that it is set in an alternative 2012 in which people are faced with the world’s greatest existential crisis. Otherwise this is the world as we know it and peachy-keen Hank wants to investigate what he thinks is a suspicious suicide – to not unsurprising indifference by most of his understandably under-motivated colleagues. The victim worked for an insurance company, so it is possible that his death is linked to a claim he was investigating that was not all it could be. Just when the case is grinding to a halt, Hank finds surprising help (and a night of romance) from Naomi, a troubled colleague of the victim who promises to look into the situation at work – and who gets killed for her trouble. As if the possible end of all life on Earth, an indifferent justice system, a drug ring, and a pair of murders were not bad enough, Hank’s sister Nico reports that her deadbeat husband has gone missing. It then turns out that he was arrested trespassing on a secret government installation … Is there really a plan to try and save a vestige of humanity and jet off to the moon? 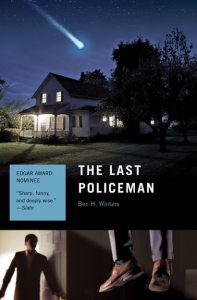 “Why are you working so hard to solve this murder?”
“I mean -” I held up my hands.
“Because it’s unsolved.”

This book has been widely reviewed and liked and it’s easy to see why – the plot certainly hangs together while at every turn we are made to question whether the investigation of a crime in this scenario is even worth undertaking or is in fact merely a ritual, a habit or even a displacement, a way to deal with what is at hand at a time when problems are so truly cosmic that any solutions are completely out of reach (there’s a great joke in the book about the stupid-but-popular Bruce Willis flick, Armageddon). But of course the reason why ‘end of everything’ scenarios are so popular is because they provide a great opportunity to consider what is important both for ourselves and for society at large and to ponder just why so many people really would like to press the ‘re-set’ button and start all over again. Rather nicely, Winters manages to tick all these boxes and explore some additional moral and ethical conundrums before reaching a satisfying conclusion, while also setting up tantalising possible storylines for the next two volumes in the series, Countdown City (2013) and World of Trouble (2014), set in the few month left before the asteroid hits. I plan to pick these up very shortly as this is an intelligent crime novel with a difference and I look forward to seeing how far Winters is able to expand on might have been far too confining a premise.

This entry was posted in Science Fiction, Washington DC. Bookmark the permalink.

40 Responses to THE LAST POLICEMAN by Ben H. Winters