NOTHING CAN RESCUE ME (1943) by Elizabeth Daly

Don’t you just hate it when a book you think you’re really going to like just doesn’t ‘do it’ for you? This is such a case …It is one of 16 detective novels by Elizabeth Daly (1878-1967), who was said to be Agatha Christie’s favourite American mystery author. Antiquarian sleuth Henry Gamadge is investigating what might be a nasty prank or something darker. His old friend Florence, rich and recently married to a younger man, has been writing a novel, but someone is adding increasingly nasty comments to the typescript when she isn’t looking …

It is February 1942 and Sylvanus Hutton and his Aunt Florence have, for the duration of the war, moved out of the city and gone back to their upstate country pile, ‘Underhill.’ Sylvanus asks his old school friend Gamadge to help when Florence starts to unravel after her manuscript gets interfered with after increasingly menacing messages start being typed by persons unknown into the manuscript. But who is doing this and why? Is it her secretary? Her unfaithful husband? Or any one of the assorted hangers-on at Underhill, all of whom stand to benefit from her will, which she has regularly changed being more than a little fickle. Gamadge recognises the additions to the typescript as quotes from the likes of Poe, George Herbert, John Ford and Marlowe (the latter, from Dr Faustus, giving the book its title), but it does little good when two murders are committed right under his nose.

“When the capsules melted, the cyanide crystals poured into the acid, gas was set free, and she died a death that isn’t much slower than lightning.”

This is an ultra traditional Golden Age mystery and its easy to see why Dame Agatha might have been such a fan. All the action takes place over a single weekend inside the secluded mansion, the solution lies hidden in the past, there are a couple of romantic subplots and ‘psychology’ plays an important part in Gamadge’s eventual solution. However, I wish I had liked this more because although many are fans of Daly’s work, I found this to be pretty tiresome really. Not just for its obsessions with bathrooms and closets (we are reminded of them constantly, setting up the villain’s dash between connecting rooms at the climax rather clumsily) but also because it is endlessly repetitive!

“Do all these people know about the unpleasantness, whatever it is?”

I truly lost count of the number of times that ‘planchette’ and the phrase ‘residuary legatee’ were used. On top of that, I didn’t really like any of the characters very much, including the rather dull amateur detective, who mostly seemed to utter phrases from his subconscious without any filtering (nobody seems to mind much though) without doing anything very clever. And the less said about an initially amusing, but increasingly ridiculous and massively over-extended, sequence of events surrounding the wearing of women’s slacks in the household the better (truly a case for Moira of the sartorially exacting Clothes in Books blog). I love Golden Age mysteries and re-read books by Sayers, Allingham, Carr, Queen et al with great pleasure, but as I get older I do find that my tolerance does get strained by the artificiality of so many of the books published at this time. I wish I had found it more engaging as I usually like this kind of thing, but to me it fatally lacked spark and originality. The villain’s initial adding of the quotations to Florence’s manuscript is never really adequately explained and I found the writing style mostly to be flatter than a pancake, despite some occasional humour.

“Say, Mr Gamadge, these are nice folks, did one of ’em go crazy?”

Other reviewers on the blog block have been much more positive about this one though and you should also check out the wise words of Karen’s over at her Kaggsy’s Bookish Ramblings as well as Bev Hankin, who generously gifted me this copy and who gave a very sensible review of it at her blog, My Reader’s Block. Most of Daly’s books are available from Felony and Mayhem, the specialist imprint established a decade ago by Maggie Topkis, while Gamadge was profiled by Les Blatt over at his Classic Mysteries blog. The Henry Gamadge mysteries

This book was a gift from Bev Hankin, the fine hostess of the 2015 Golden Age Vintage Mystery Challenge bingo – I submit this review in the ‘TBR opening line’ category as its opening was a bit more arresting that the others I picked at random – it begins: “The plump little man leaned over Gamadge’s shoulder and squeaked in his ear: “Who am I?”” The three other books I picked from my TBR, and found wanting in this respect at least, were: Mabel Seeley’s  Eleven Came Back (“To begin with, there wasn’t anything about our going to the Lady Luck to indicate that we were getting into murder.”); Alan Hunter’s Gently in the Sun (“Even at this hour in the morning, when the dew clung heavily to the rough, wiry blades of the marram, one could tell that by early afternoon the temperature would be nearly ninety”); and Catherine Arley’s Ready Revenge (“The employees in my tannery don’t work on Saturday afternoons.”) 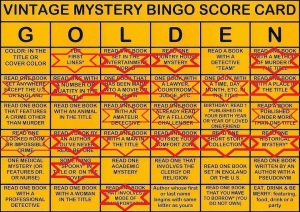 36 Responses to NOTHING CAN RESCUE ME (1943) by Elizabeth Daly