Posted on 2 June 2015 by Cavershamragu 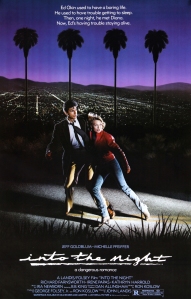 This genuinely quirky thriller stars Jeff Goldblum as an insomniac and cuckolded husband who goes on the run with unlikely femme fatale Michelle Pfeiffer. Pratfalls and violent death co-exist in this blackly comic adult Neo Noir that works like a dream. Though some were distracted by a plethora of star cameos, ranging from director John Landis himself (as a bungling Iranian assassin) to the likes of David Bowie (as a happy British hitman) and a surprised Jim Henson, helping to hold it all together is a killer soundtrack by the late, great BB King. We begin at LAX …

The following review is offered for Todd Mason’s Tuesday’s Overlooked Film meme over at his fab Sweet Freedom.

When I first heard that BB King had died, at the grand old age of 89 and much too soon, the first thing I did was re-watch Into the Night – not just because I’m a movie nut but because, at age 16, this was when I first heard his music and I was of course knocked out by it. His playing is an integral part to this film, one certainly adorned with more than its fair share of stars. 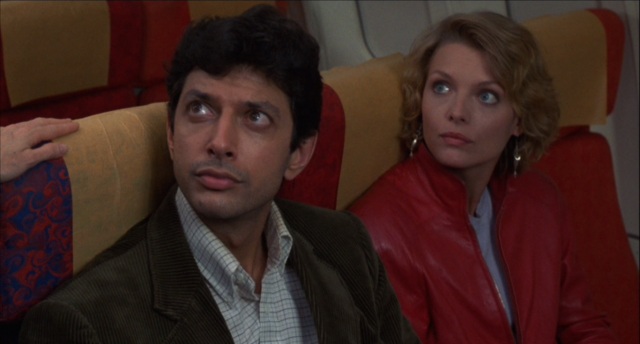 Goldblum plays Ed Okin, an aerospace engineer who is overcome by some sort of existential malaise that he can’t really define, but which peaks when he catches his wife in bed with another man. Heading off into the night without really knowing why, he gets caught up in the complex life of Diana (Pfeiffer), a jewel smuggler with connections to the movie industry who gets into deadly trouble when she transports jewels that once belonged to the Shah of Iran.

“This is ridiculous. Big shot, huh? You got a gun. Now what? … Let me ask you something. Maybe you can help me. What’s wrong with my life? Why is my wife sleeping with someone else? Why can’t I sleep?”

Set mainly over the course of a couple of days, bookended by dramatic killings at LAX, this is a fascinating example of neo-noir, one that could really only have come from the 1980s though it does in fact have a late 70s coolness to it, from its low-key colour palette, basic understatement and rather languid pace. Indeed, my one criticism (and it’s not much of one) is that it is a bit too slow. We begin with Ed’s meandering life and share this for over a quarter of an hour. This may put some viewers off, which would be a shame as it is designed to offer contrast to what happens when Diana comes bounding into Ed’s life – at which point everything changes, including the pace.

Unlike most examples of the Neo-Noir genre from that decade – and here I’m thinking especially of Against All Odds, Jagged Edge, Body Heat, No Way Out, Sharky’s Machine, DOA – which all have very strong ties to the genre’s prototypes of the 1940s, Into the Night is truly sui generis. If anything what it demonstrates is a genuine screwball sensibility, one that belongs perhaps to the 30s rather than the 40s. I have always felt that the two genres have a lot more in common that one night think and here we don’t have a jazzy score to evoke smoke-filled rooms and femme fatales. Instead this is a tale of urban paranoia laced with jet black comedy in which 80s acquisitiveness and the new international reality of Reaganomics are matched against Hollywood fakery and found wanting.

This is an often very funny film but is definitely an adult entertainment – like Landis’ classic An American Werewolf in London, this genre hybrid comes with nudity, bad language and some violence too (I counted at least 12 corpses by the end of the story, most of them gunned down), all of which falls right in with its increasingly surreal tone as the story escalates towards a violent climax back at the airport.

The film is otherwise a notorious for the many, many director cameos, including David Cronenberg as Goldblum’s boss, Don Siegel (as ‘Embarrassed Man’ coming out of a toilet cubicle), Lawrence Kasdan and Jonathan Demme as law enforcement officials and Roger Vadim as one of the villains (‘Monsieur Melville’). This does in part prepare us for the substantial role that Landis gives himself as the Middle Eastern leader of the four-man henchman hitman squad of the film. They are bumbling idiots who none the less have real bullets in their guns and do in fact go around killing all sorts of people while tripping over their feet – the mixture of comedy and drama can be so difficult that it is rarely attempted within a realistic framework. Here it is completely successful, providing us with a kind of Noir version of such classic comedies as Bringing Up Baby and The Lady Eve in which ladies from money mess up lives of easy-going, placid men who belatedly realise that what they want is in fact a bit of excitement in their lives. Tonally Into the Night tries very hard to keep things together, and against all odds succeeds admirably. Hope you agree.

DVD Availability: Released quite a few years ago in an OK-looking DVD, this is really treasurable for its documentary tribute to BB King. Would wonderful to have this on Blu-ray now though, especially with retrospective comments from cast and crew – this year is its 30th anniversary in fact …