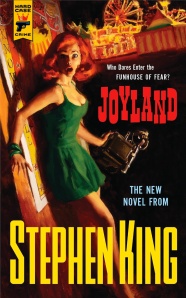 This review is by way of a small tribute to Glen Orbik, who died on Monday after a long battle with cancer. He was the cover illustrator for many of the books published by Hard Case Crime, including this whodunit by Stephen King, which has been such a success that it has been announced that a new illustrated hardback edition is due to hit the stands in the Autumn. So, what’s it all about? Joyland is set in the summer and autumn of 1973 at an amusement park in North Carolina, where a heartbroken young man recounts a coming of age tale involving murder and the paranormal …

I submit this review for Carl V Anderson’s Once Upon A Time IX Challenge; and Friday’s Forgotten Books meme run by Patti Abbott at her fab Pattinase blog.

“Beyond the lights there is only darkness …”

Devin Jones is 21 years old and has just been dumped by his long-term girlfriend, Wendy. He is working at the Joyland funfair during the summer to help put himself through college and there makes friends with two other students doing the same thing, Erin Cook and Tom Kennedy. Tom and Erin soon become an item, ironically mirroring Devin and Wendy’s breakup, but once the season is over they head back to College while Devin decides to stay on at Joyland and take a year out. He makes friends with Annie and Mike Ross, who are staying in a house near the funfair. She is a young mother whose world revolves around her son, who is dying of muscular dystrophy. Mike has a form of second sight and wants to make the most of the time he has left. Devin, Mike, Erin and Tom will all become involved in trying to solve the ‘Carny Killer’ case, which in 1969 left a young woman dead inside Joyland’s horror ride – and, just maybe, her ghost.

“I don’t remember dreaming that summer at all.” 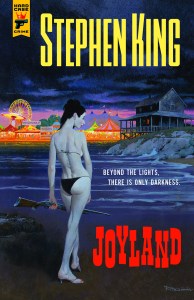 The book is dedicated to Donald E. Westlake who, not coincidentally, wrote Slayground (1971), which along with its sequel Butcher’s Moon (1974), is one of a couple of his ‘Parker’ thrillers set in a funfair – and which I recently reviewed here. However, beyond the out of season funfair, the two have little in common. What we do have though is trademark King, especially reminiscent of his novella The Body (which originally appeared in the 1982 collection Different Seasons). Like that book it is a reminiscence told in the first person of events that took places decades earlier, a tale of lost youth and friendship told by a now middle-aged writer. The use of the supernatural (well, it is Stephen King after all) is pretty understated, though it does become very handy during the climax when Dev is trapped by the killer on top of a ferris wheel during a very dark and stormy night. This is a whodunit, no question, and a very traditional one at that  – but it is at its best as an evocation of a vanished way of life and as a rite of passage for its virginal narrator. Very typical of this author and very well done in his colloquial, raconteur style (there are no chapter breaks, just breaks with a heart symbol to take you from one section to the next). A surprisingly traditional tale from thiis author, I enjoyed this one a lot and thought it was definitely a step up from King’s previous HCC novel, The Colorado Kid, with a must stronger narrative, a strong sense of time and place and a finale designed not to leave a dry eye in the house. 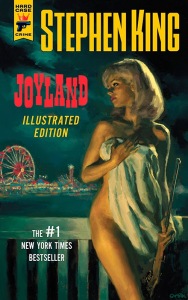 To find out more about King visit his homepage: http://stephenking.com/ and for more about Joyland, and read a sample of it, visit the HCC homepage at: www.hardcasecrime.com/. HCC books all feature new covers painted in the eye-catching style of 50s and 60s paperbacks. Joyland was initially available in two versions, including an ultra expensive limited edition with cover art by veteran Robert McGinnis (see his homepage at: www.mcginnispaintings.com).

The general release paperback instead comes with art by the late, great Glen Orbik (it’s the one featured at the top of this review). You can (and should) check out at his homepage at: www.orbikart.com/. For a really nice tribute to the man, with plenty of great examples of his cover art, you could do not better than to visit the Killer Covers blog and read Jeff Pierce’s celebration of the life and work of Glen Orbik. I have included a few of his covers in earlier Fedora reviews of HCC books, including Songs of Innocence by ‘Richard Aleas’ (really HCC founder Charles Ardai; and Blackmailer by George Axelrod. Here is their brief biog for him, with links to the book he illustrated for them:

GLEN ORBIK (Branded Woman, The Colorado Kid, The Wounded and the Slain, Blackmailer, Songs of Innocence, Money Shot, The Max, Fifty-to-One, House Dick, The Valley of Fear, Memory, Choke Hold, False Negative, Seduction of the Innocent, Web of the City, Joyland, The Secret Lives of Married Women, Odds On, Scratch One, Easy Go, Binary, Brainquake, Easy Death, Thieves Fall Out, The Girl With the Deep Blue Eyes)
Glen Orbik was a freelance illustrator for over twenty years. He studied with master illustrator and classic movie poster artist Fred Fixler, eventually taking over many of Fixler’s classes upon his retirement. Glen continued to teach for over 12 years. Specializing primarily in covers for comics and paperbacks, Glen painted for clients including Marvel and DC Comics, Sony, TSR, Berkley Books and Avon Books (including for two Ray Bradbury titles). He also painted collectible imagery for Warner Bros./DC Studios, as well as preliminary poster work for the Spider-Man and Hulk movies. He painted more than two dozen covers for Hard Case Crime over a period of a decade, and was one of our most beloved artists. He died of cancer on May 11, 2015.

Joyland was recommended by my old, old friend Simon, who loves Stephen King’s work in print and on-screen and has all his books in beautiful first editions. The Hard Case Crime series was first suggested to me by my old buddies Jamie and Maja – as always, thanks guys.

38 Responses to JOYLAND by Stephen King