Posted on 8 May 2015 by Cavershamragu 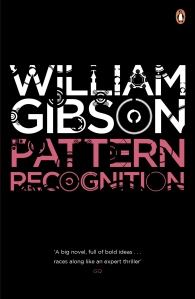 This tale of industrial espionage, set shortly after the World Trade Center attack, features a heroine with a most bespoke fashion sense and the search for a movie – one that may be a work of genius but which is only being made available anonymously in apparently random chunks on the Internet. This thriller comes from a great name in speculative fiction, one regarded as having fathered the ‘cyberpunk’ genre with Neuromancer (though some might argue Roger Zelazny got there decades earlier).

I offer the following review for Patti’s Friday’s Forgotten Books meme, which today is being hosted by Todd Mason over at his fab Sweet Freedom blog.

Our protagonist is American brand consultant Cayce (she pronounces it ‘case’), who has an innate, uncanny ability to predict future fashion trends – what will be cool and what will not, but also suffers from some concomitants psychological allergies, including most spectacularly an irrational fear of the Michelin Man! She lost her father the year before in the Twin Towers attack, though nobody knows what he was doing in the vicinity at the time. Her mother thinks she can detect messages from him in audio patterns in broadcasts but although his body was never recovered, Cayce has made her peace with his death. He had contacts with the US security forces, and this comes in handy when a reasonably straightforward marketing job turns into a globetrotting thriller that jumps from London (which she refers to as the New York ‘mirror world’) to Tokyo and eventually Moscow.

“Homo sapiens are about pattern recognition, he says. Both a gift and a trap.” 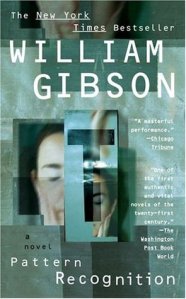 Cayce has been hired by the powerful Belgian businessman Hubertus Bigend (he doesn’t understand why people find the name amusing), the head of the mighty Blue Ant advertising agency, to track down who is making and releasing segments of footage from what may be a brilliant new work, but under conditions of such mystery and anonymity that it has caught the attention of the Internet community, who pour over each frame looking for meaning. This is of course one of the themes of the book – at a time of uncertainty following a global tragedy, the distances between people seem increasingly hard to negotiate and yet the need to bridge the gap has never seemed so pressing. Cayce makes an enemy of Dorotea Benedetti, who thinks she is after her job at Blue Ant and whose background in industrial espionage includes some very shady contacts. As Cayce reaches out to her friends around the globe, most of whom she has only ever ‘met’ on the Internet, she delves into the secrets of steganography to find hidden codes buried in the footage. As she gets deeper and deeper into the search, her sense of paranoia and dislocation grows and evil forces mount around her. Who can she trust? And is her holy grail even real?

Pattern Recognition was Gibson’s eighth novel and  originally came out in 2003, so some of its detail on the Internet does seem a bit old-fashioned unfortunately. It was also his first novel set more or less in the present day (circa the summer of 2002) and was the first in a loose trilogy about the ‘Blue Ant’ company (the other two are Spook Countr 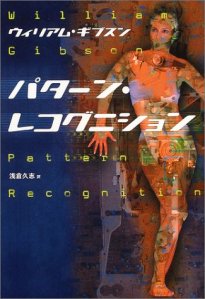 y (2007) and Zero History (2010)). As a conspiracy thriller in which our protagonist’s world gets more and more solipsistic, the book is perfectly entertaining but along pretty predictable lines. Indeed, it is quite surprising just how conventional the narrative becomes with all the requisite elements, such chases, secret codes and even a MacGuffin, all present and correct. Also, it was a little dismaying to realise that pretty much all the heroes are usually WASPs and Americans while villains or more generally ambiguous people are presented as ‘foreign’ eurotrash (i.e. Italian or Russians) or from other races (mainly Japanese). I don’t imagine Gibson would recognise this blind spot, but to me it’s there and a sore point.

However, it’s the language and ideas that you will remember such as the definition of jet lag as being the time it takes for your soul to catch up with you; or the endless fascination with material emblems (I did think a better title might have been ‘Surface Tension’), which despite being a bit irritation after a few hundred pages does, none the less, ultimately exert a kind of hypnotic charm. The book does, for me, disappoint on the plot front by falling in with too many thriller clichés – from epicanthric villains to Italians and Russians all being mobbed up – but  Gibson is a fascinating stylist whose book has many really intriguing ideas and conceits. It may not hold together as a narrative – its reach definitely exceeds its grasp as many plots points are resolved in remarkably flat-footed fashion with a barrage of exposition and unconvincing info dumps – but its ideas are none the less beguiling.