THE IVORY DAGGER (1950) by Patricia Wentworth

Posted on 3 March 2015 by Cavershamragu 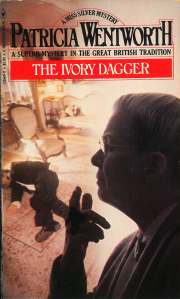 I may not be a particular fan of cosies (or even ‘cozies’) but for decades Wentworth was a truly ubiquitous figure – so it’s about time Fedora posted a review of one of her mysteries. Doris Amy Elles (1878-1961) as Wentworth wrote nearly three dozen whodunits featuring Miss Maud Silver, a retired schoolteacher turned professional sleuth. Dagger is, by my reckoning (see below) the 18th in the series and features a peculiar scenario in which a woman apparently stabs her fiancée while sleepwalking after an overdose of Walter Scott’s fiction! But did she actually do it?

I offer the following reviews as part of Bev’s 2015 Vintage Mystery Challenge.

“She awoke under a blaze of light. She was in the study. The overhead light was on, the room was a s bright as day. Herbert Whitall was lying sprawled across the carpet. he was dead. She had never seen a dead person before but she was very sure that he was dead”

Beautiful but weak-willed Lila Dryden is being forced into marriage to the wealthy, chilly and much older Herbert Whitall by her domineering aunt. Friends and her ex-fiancée try to talk her out of it, but Lila really is a total drip, so lacking in confidence that she will go through with the wedding just not to offend, despite the fact that she is physically repulsed by Herbert (and most men actually) – which is fair enough as he is a thoroughly nasty piece of work.

“She’s very lovely, and she’s very sweet, but the man who marries her will have to be her father, and her brother, and her nursemaid, as well as her husband”

Shortly before the wedding he is stabbed to death with the eponymous instrument and everybody in his country retreat, Vineyards, is a suspect – his neer-do-well cousin who stands to inherit, a Professor with whom he argued about the provenance of the ancient dagger, unhappy servants (including a personal secretary who clearly had a fling with him) and so on. But Lila is the prime suspect after being found standing next to the body, covered in his blood and holding the knife. Apparently she had found Whitall and the knife while sleepwalking – but was her subconscious acting out after Lila was disconcerted the evening before by a telling of Scott’s novel Bride of Lammermoor, which also ended in a similar stabbing? Lila’s aunt calls in Miss Silver to solve the case, and save the family honour. She quickly partners up with her friend, Scotland Yard’s Inspector Abbott (the two even chat in French so as to speak freely mixed company) and after many, many interviews and little trips to opportunely overhear private conversations, the culprit is found and young love triumphs.

“I do not come into a case to prove anyone innocent, or guilty. I come into it to discover the truth and to serve the ends of justice” 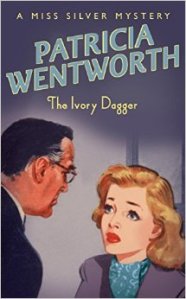 People love the Miss Silver books but I have only read another in my dim and distant teenage past (Eternity Ring) so was quite looking forward to this, albeit from a position of almost complete ignorance. However, I must come clean and state that I was thoroughly unimpressed by this very mediocre offering. For one thing, this a remarkably by-the-numbers, ultra traditional Golden Age detective story: we have the murder victim, a nasty patriarch who nobody seemed to like at all; the cast of relatives expecting to inherit from his will that was due to be altered in favour of his bride-to-be just before he was killed, so giving nearly all of them a motive; the star-crossed young lovers; and the sleuth who softly, softly gets to the truth. Just how many GAD clichés can one book hold? Plenty, it turns out in this case …

Lots of people seem to really like this book going by reviews online but I just can’t understand why. To me there is simply nothing to distinguish it from hundreds and hundreds of others, except in a negative way as by 1950 the world and style it inhabits already seemed to belong to another era. There is no momentum to the narrative at all – once Miss Silver arrives some 60 pages in, it is just a succession of interviews until an arrest is made some 160 pages later, with very little to engage the reader in terms of drama (no further criminals activity is recorded). And the mindset is certainly very Edwardian even though it is definitely set in the (then) postwar present day. That it is very much a pre-war tome in style is confirmed by the revelation of the villain’s identity, which I won’t spoil but which is really, really underwhelming, recycling as it does just about the hoariest cliché of the genre imaginable, without apology or irony, seemingly unaware that it will make practically any aficionado roll their eyes in sheer disbelief!

So one star because it is perfectly solidly constructed and another half just for the sheer cheek of its ending, though I am not at all sure if the intent was in any sense parodic.
The Miss Maud Silver mysteries:

This book was a gift from the very kind Bev Hankin, the generous hostess of 2015 Golden Age Vintage Mystery Challenge bingo – I submit this review in the ‘murder weapon’ category: 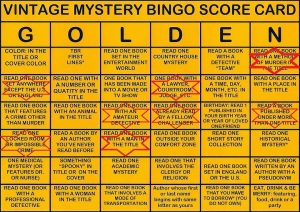 48 Responses to THE IVORY DAGGER (1950) by Patricia Wentworth