Posted on 2 December 2014 by Cavershamragu 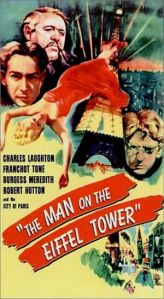 Charles Laughton plays Inspector Maigret in this highly atypical Hollywood movie, shot in colour and on location in Paris. Despite a cast that includes Franchot Tone and Burgess Meredith (who also took over as director at the last-minute), this is a film that unfairly fell into obscurity and is ripe for re-discovery. Based on Simenon’s 1931 book La Tête d’un homme, it tells the story of a double murder, the innocent man who gets blamed and a would-be genius of crime …

“At 2 a.m., 15 October, your cell door will be left open and the guard will be busy elsewhere. If you follow the directions as marked below …” – A Man’s Head, translated by David Coward

The film was adapted (with reasonable fidelity) from the fifth Maigret book to be written, though by that point none of the four previous volumes had in fact yet appeared in print. Its is one of my favourites from that early batch of Maigret books that, in the first year or so, originally were issued at a feverish rate of roughly once a month. It has appeared in English-speaking countries as either A Battle of Nerves or, as in the recent Penguin edition translated by David Coward, A Man’s Head. This new edition provides a valuable corrective to the long-available translation by Geoffrey Sainsbury, who tended to take more than a few liberties when turning Simenon’s books into English. It begins memorably in the high surveillance wing of a Paris prison in cell number 11. Its occupant, due to be executed in a few days for a double murder, is about to break out of jail thanks to a most unexpected agent – Maigret himself!

“If I had not such confidence in you, Inspector, I should never have got mixed up in such business as this, I assure you. Don’t forget, I think Heurtin is guilty …” – A Man’s Head, translated by Geoffrey Sainsbury 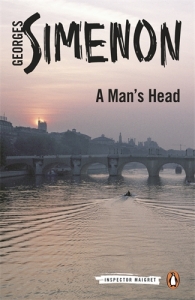 Joseph Heurtin is a delivery man for a florist whose bloody fingerprints and boot prints were found in the house of Mrs Henderson, a wealthy American widow living in Saint-Cloud, where she and her maid were found brutally stabbed to death – this must be an open and shut case, right? Well, Maigret is not convinced. For one thing Heurtin has no motive as nothing was stolen; and secondly, he just seems to lack the necessary callousness, desperation let alone intelligence to have attempted the crime – plus he keeps saying he is innocent. So Maigret engineers his escape to see what he does. Unfortunately the newspapers get an anonymous letter telling them of the police plan, so Heurtin realises it’s a trap.

But in a way this was what the Inspector wanted because it has made the real criminal, the manipulator behind the scenes, show himself. Maigret has the anonymous letter analysed and, with somewhat implausible speed, learns that the author is incredibly intelligent, probably dying and that he wrote the note from the swanky American bar at the Coupole (a real Parisian haunt). There Maigret finds Mrs Henderson’s heirs, William Crosby and his wife (who for some reason have their the surname changed to ‘Kirby’ in the Sainsbury translation) and their friend Edna, with whom it turns out William is having an affair. And there Maigret finds a very strange, flame haired Czech by the name of Radek. From now until the end of the story, which will include two attempted suicides (one successful, one not), this will be a battle of wills between Maigret and his quarry and take some fascinating turns as Radek starts behaving very bizarrely indeed. 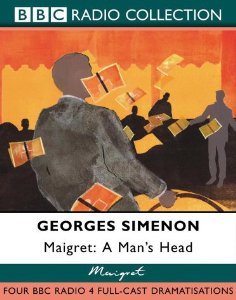 Like most of the Maigret stories, A Man’s Head has been adapted for film, television and radio a great many times but its connection with the world of the cinema in particular is unusually strong. In part, the story is built around the notoriously unsolved murder of Hollywood director William Desmond Taylor in 1922, with Radek referring to it directly as an example of a case where the police almost certainly knew what had happened and who the killer was, but could do nothing about it. What’s even more interesting is that Simenon himself had originally intended to make his directorial debut with his own adaptation of it. Ultimately he and the producers had a less than amicable split, his script was re-written and Julien Duvivier was brought in to direct. The resulting film, La Tête d’un homme, was released in 1933 and is actually a pretty impressive effort, though it changes the book fairly substantially (not least because it tells the story completely sequentially, starting with the crime). To read an in-depth review of that film, see James Travers’ fine essay at the French Film Site. The film is currently available on YouTube but  unless you speak French, you’ll have to rely on its own translation engine to get English subtitles, which inevitably are pretty poor – but better than nothing if your French is just not up to the challenge. The print is in nice condition however.

“By the way – there’s one thing I’d like to know. Am I following you, or are you following me?” (Charles Laughton)

In 1949 the book was adapted again as The Man on the Eiffel Tower, which is certainly significant as it remains thus far the only English-language movie yet made featuring Maigret. A Franco-American co-production, it was shot independently in Paris by a company set up by its star Franchot Tone and the producer, Irving Allen, who was also originally slated to direct too. But that changed quickly when after a few days co-star Charles Laughton decided Allen wasn’t up to the task, with the reins handed to Burgess Meredith, one of the film’s other co-stars. It is said that Laughton instead directed some of the scenes in which Meredith appeared, with Tone supervising scenes where they both appeared. Laughton’s relationship with cinematographer Stanley Cortez must have been good as they would collaborate on Laughton’s only other directorial outing, the magnificent chiller, The Night of the Hunter (rather less gloriously, Cortez also worked with Laughton on Abbott and Costello Meet Captain Kidd). 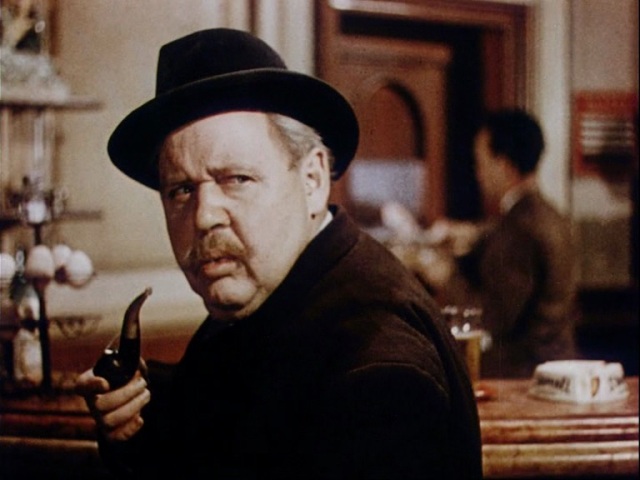 As with the 1933 version, the book has been altered in its transposition to the big screen, telling the story initially in linear fashion (though with a flashback to the murder scene that is wonderfully eerie). Meredith is very sympathetic as the rather dim Heurtin (here given a wife that eggs him on to make some unwise decisions to make some extra money) while Franchot Tone is even better as Radek. Largely off-screen for the first half hour or so as we focus on Heurtin’s plight (and flight across Paris, initiating the first of many sequences that act as a Parisian travelogue – but then the city is actually billed as one of the stars, so that seems fair). Tone’s appearance as the unbalanced man with a god complex is well worth waiting for, much more nuanced and persuasive than his hammy madman in Phantom Lady (which I previously reviewed here).

“Although [Franchot]Tone was not afraid of heights, he was a bad business man.” – Burgess Meredith

Laughton is often very good as Maigret in his darker moods, though in many scenes there is a sly, even jocose undertone that does not sit well with the literary character as described by Simenon (at the end he even kicks his heels). The climax is completely original to the film, and indeed represents its main deviation from the book, set as the title suggests on the Eiffel Tower and is technically extremely impressive as the main characters scurry up and down it. It may not add much to the story but the spectacle would undoubtedly have been a major selling point in its day, along with the new monopack Ansco Colour process, developed by Agfa, that sadly today survives only in faded and somewhat battered form. For much more detail on the film, visit:  http://themanontheeiffeltower.com/

The Man on the Eiffel Tower is currently available on YouTube in a rather faded print (the UK DVD is much better – see below). Other iterations of the story you may wish to look at include the one starring Rupert Davies, which remains the most popular British TV incarnation (the Michael Gambon version should have been better, but sadly was a bit on the dull side). His adaptation, retitled Death in the Mind from 1962 is on YouTube. My favourite TV version though is probably the Italian one also from the 1960s, entitled Una Vita In Gioco that is very faithful to the book – indeed, one could argue that it takes this to great extremes and is wildly over extended (it was turned into a rather talky three-parter running over three hours without ad breaks). However, it is very atmospheric and stars the great Gino Cervi (allegedly Simenon’s personal favourite) and almost uniquely actually follows the structure of the book, beginning with the jail sequence – you can also watch it on YouTube. The version with Jean Richard, which is perhaps the most faithful overall, is from 1967, but sadly is not available online with subtitles – but if your language skills are appropriate, you can view it here.

DVD Availability: The best DVD edition is the one released in the UK by Odeon, which offers an edition based on the UCLA restoration – the US edition from Kino seems to have been made from lesser elements. It is also available (sigh) on YouTube … 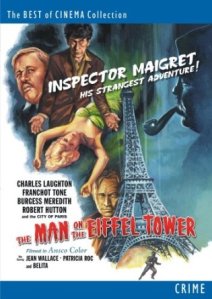 I now have a dedicated section devote to the Maigret series, with the long series of novels broken down by decade (based on the original French publication dates):

I submit this review for Bev’s 2014 Golden Age Vintage Mystery Challenge Bingo in the ‘title in translation’ category: 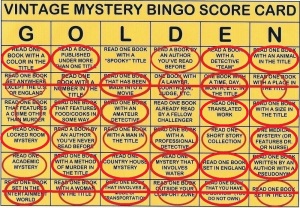