Posted on 26 October 2014 by Cavershamragu 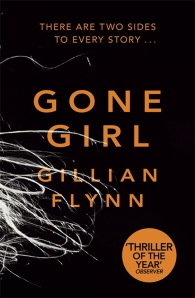 First published in 2012, this “he said, she said” novel of marital suspense by Gillian Flynn – about a man accused of killing his wife when she goes missing – quickly became a bestseller in the US. Flynn has now turned it into a movie in collaboration with tyro director David Fincher and a cast headed by Ben Affleck, Rosamund Pike, Neil Patrick Harris and Tyler Perry. So I thought it might be a good time to have a look at how they compare and see what makes them tick. The book begins on Nick and Amy Dunne’s fifth anniversary, but all is not well with their marriage …

The following review is offered for Katie’s Book to Movie Challenge at Doing Dewey (for review links, click here).

Nick: “It was my fifth lie to the police. I was just starting”

The story is told by two contrasting and alternating narrators – we begin with Nick describing what is happening in the here and now, from the day he came home from work to discover his wife gone and his house in disarray. He calls the police and then finds the clues to a treasure hunt that Amy created (she did one for each of their anniversaries). As he finds each new message he seems to feel more and more guilty – but about what? And who is calling him on the cellphone he keeps not answering? Then the police turn up many inconsistencies at the crime scene, deciding it was clearly staged. It then emerges that Amy had tried to buy a gun, and confided in people about problems with their marriage, people who Nick says didn’t even know her. Then trace evidence of fresh blood mopped up from their kitchen floor is identified as being his wife’s. Just how reliable a narrator is he?

At regular intervals we switch to entries from Amy’s diary, which go back seven years to 2005, when she and Nick first met. Ultimately the two narratives more or less catch up with each other, and what she says ultimately paints a very different picture from the one Nick presents. At the most prosaic and superficial level, what the two narratives describe is the sad story of two people who start off in love and then after a couple of good years hit one too many bumps in the road. Then things get very weird indeed …

Amy: “I am something to be tossed into a junkyard, thrown into the river if necessary. I don’t feel real anymore. I feel like I could disappear.”

Amy and Nick used to live in New York – she wrote personality questionnaires for magazines, he wrote pop culture articles. Both lived well, thanks in part to a big trust fund from her parents, two sociologists who struck it rich with a series of children’s books based on their daughter’s life. But when the recession hits the couple find themselves jobless – then after Nick’s mother gets ill he insists they move back to Missouri, something she only does for love of her husband. But, as we realise, there are many, many things he is not being honest about, Indeed, he is almost a pathological liar – even his twin sister Margo, the only person who seems to really understand him, starts to have her doubts. Did he really kill his wife, or was it an accomplice? (it turns out he has been leading a double life). Or was it someone who has nothing to do with Nick, like a man who once stalked Amy?

Nick: “Now is the part where I have to tell you I have  [deleted] and you stop liking me” 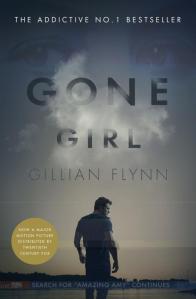 At the halfway mark Flynn’s pulls the big switcheroo, the major twist that should have pleased its many mainstream readers but which didn’t really didn’t fool this hardened mystery fan (and if you’re a dedicated reader of Nicholas Blake and Patrick Quentin, you won’t be that surprised either – I’ll say no more …). At this point we know that Amy and Nick’s marriage is well and truly gone, so now it’s a more a thriller to see what will happen to him as evidence of guilty behaviour mounts ever higher and the police close in. He gets himself a savvy celebrity lawyer named (really?) Tanner Bolt to help him play the media game and get the public on his side after Amy’s parents desert him. Will he get away with it – and, more to the point, should he?

To make the big twist in the second part of the story work, Flynn uses that tired cliché of having a hitherto sane and sympathetic character suddenly start to cackle and blather, in effect having a psychotic break and revealing themselves to actually be (or rather, think themselves to be) a criminal mastermind. It is handled rather poorly, with dozens of pages devoted to tedious explanations on how the wool was pulled over everybody’s eyes and literally asks the reader to excuse the titanic lack of credibility on the basis that the character, it turns out, is actually very crazy … So no, not very convincing, which is a shame because the basic plot is actually perfectly solid and some of the character stuff and the suspense scenes showing the police slowly but surely getting their man is very well handled. What it does do though is reinforce just how misanthropic a novel this is, and just how unpleasant the main cast turns out to be. There is also some genuine black humour and perspicacity about the way people create a version, or vision, of themselves for others to see and admire but which can backfire horribly (there is a wonderfully funny sequence in Amy’s diary about the male fantasy of ‘cool women’ that really stands out here). But the plot, while full of fun twists and reversals, is at heart a melodramatic potboiler that is smart enough to engage the chattering classes by pushing gender buttons, and yet is perhaps just a little too knowing to be truly convincing at a human level – is the film any better?

The first thing one has to say is that Ben Affleck is such perfect casting as Nick that it’s hard not to believe Flynn didn’t have him in mind when she wrote the book – it suits his slightly detached, emotionally reticent onscreen persona and traditional leading man good looks down to the ground (even when he covers up the cleft in his chin as a sign of honesty). As the eponymous missing person, Rosamund Pike has in many ways the more interesting role, presented of course primarily in flashback, reading out her diary entries on the soundtrack. Neil Patrick Harris does very well as a creepy ex-boyfriend of Amy’s who has an agenda of his own and Tyler Perry is a very surprising choice as Tanner Bolt, making the lawyer much more amusing and likeable than he is in the novel, while Kim Dickens probably walks away with the movie as Detective Boney. David Fincher, who with Seven, Fight Club and Zodiac made some terrific and very eerie thrillers, brings his usual gloss and attention to detail to bear, though it’s only in the nasty final act that he gets to really turns the screws on the audience, which he gleefully does to great effect. While the structure has necessarily been simplified, with various minor characters expunged and others reduced to mere walk-ons, this is a very, very faithful adaptation – perhaps too much so, as at two and a half hours it is a good 15 minutes too long, over-extending the ending especially. Readers of the book won’t get much in the way of any new surprises, not even at the very end despite early reports that the movie would be changing it.

Like the source novel, this is a very slick entertainment that will be even more fun if you don’t see the big twist coming (and which, oddly, in the film is slightly soft-peddaled, which I am not entirely sure was intentional – it’s certainly a bit flat and not presented as a major reveal). It kept reminding me of the film adaptation of Presumed Innocent – and it has to be said, in that comparison, the book and film do come off as hokier and undeniably second best.