Posted on 23 October 2014 by Cavershamragu 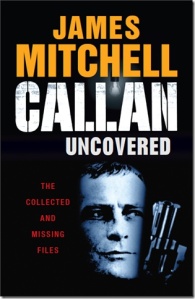 More great news from Mike Ripley and those great people at Ostara Publishing. Almost half a century after he first electrified British television screens in the “one-off” drama  A Magnum for Schneider, the enigmatic, ruthless and tragic hero David Callan (so memorably portrayed by Edward Woodward) is back in a new anthology, Callan Uncovered, published as an Ostara Original simultaneously as a hardback, trade paperback and eBook.

The 24 stories, written by Callan creator James Mitchell (1926-2002), appeared in the Sunday Express newspaper between 1973 and 1976 and have never been published in book form before. Along with the first Callan story written for the TV Times in 1967, they form the basis of Callan Uncovered, along with an original treatment for an episode of the TV series,  a previously unseen complete script that was never filmed, and an introduction by James Mitchell’s son Peter.

Ostara editor Mike Ripley spent the best part of a year tracking down the stories for the collection, with the help of the British Library and a network of die-hard Callan fans. The story of “uncovering Callan” has been posted on the Ostara website along with details of James Mitchell books now back in print as Top Notch Thrillers, at www.ostarapublishing.co.uk/

A review of this book will be appearing here at Fedora very, very shortly.

30 Responses to Callan is back!