Posted on 14 October 2014 by Cavershamragu 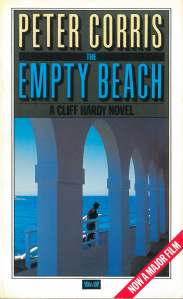 Bryan Brown played Australian private investigator Cliff Hardy in this adaptation of the fourth in the continuing series of mysteries by Peter Corris. As of this year Hardy has featured in 40 books, and as the author is usually credited with establishing the first contemporary Antipodean PI series, I thought it was time I gave it a look. The eponymous place in the title is Bondi in Sydney …

First off, special thanks to the indefatigable Margot Kingberg , the blogger and mystery writer extraordinaire behind Confessions of a Mystery Novelist, for putting me on to this series. After my first visit to Sydney in the summer, this proved a perfect reading choice. Cliff is forty, divorced, trying to quit smoking, fought in Malaya in the 1960s, drinks a bit too much, enjoys the open air and after various jobs is now a PI. He is hired by super-rich Moira Singer to find out if her husband, who made money from pinball machines and perhaps slightly shadier activities, is dead or not. He’s been missing for two years, last seen on Bondi Beach, and was presumed drowned until a letter arrived, claiming that he is still alive. Cliff makes several contacts in the Bondi area looking for people who might have known Singer or his associates. Before long he partners up with Bruce, an American journalist, and his friend Ann, who is a sociologist from a wealthy background with an interest in young women barely surviving on the streets. Corris does a good job of capturing the counterculture ethos of those living in the underbelly of the area, from indigents and drunks, prostitutes and drug users and those looking for spiritual salvation in an ashram. It is not long however  before events turns fatal.

Bruce, who was looking into the local drug trade, is garrotted; then a wino named Leon he had just spoken to is also found dead in the ramshackle apartment building he stayed in. Is there a connection? When Hardy gets sapped and taken for a ride in time-honoured PI fashion to get beaten up and threatened by a local Mr Big, the depth of Singer’s business interests in the seamy side of Sydney start slowly to come into view. Hardy makes for an appealing investigator, an essentially straightforward person who carries a few scars (some that show, some that don’t) but who is struggling under the pressure of any overbearing traumas (though we get hints of his dislike for his stretch in the army). He is laconic and fairly laid back, more Moses Wine that Philip Marlowe,  likeable without being too special – in other words, he is a plausible and fairly realistic character. This is what gives the book its distinctive tang – while he gets mixed up with criminals, as you would expect fromt he genre, he is resilient but not especially brave, his reactions to fear and danger are those we would all have. The standout sequence is the horrifying discovery of a scam involving several elderly people who are kept drugged and locked up while a pair of criminals cash and steal their pension and social security payments – Cliff’s revulsion at the filth and degradation he discovers is very powerful but there is no sermonising. So, how did this translate to the big screen?

“The beach got a clean slate very day, unlike people.”

Bryan Brown with his long frame and lupine good looks is physically very good casting for Hardy, though things get off to a poor start in his opening exchange with Mrs Singer (Belinda Gibbin), which comes across as hurried and under-rehearsed, the actors seemingly intent on spitting out the words as quickly as possible. After this though things do improve, as do the changes fromt he novel. Bruce is now a gruff Australian (played by Nick Tate) who had previously written about Singer, which tightens the plot. Anne is now his girlfriend and her wealthy family connected with Singer, again streamlining the story and its characters, which is to be expected in a genre movie. Making the most of the visual possibilities of Sydney, Bruce’s murder now takes place while he is surfing, which is not all that plausible but certainly looks spectacular. The sequence involving the house of horrors inhabited by ripped off pensioners works extremely well and is again made much more concise, though this does tend to make it even more obvious that this subplot is mostly disconnected from the Singer storyline (as is the complete removal of the ashram sequence). Oddly this actually made the movie slightly harder to follow than the book, which can’t have been intentional …

Peter Corris worked on early drafts of the script but eventually it was made by others and he was apparently fairly displeased at the finished product. There have been some cosmetic changes, including the interesting choice to make Bruce’s notes into a McGuffin the book never had, as well as adding more action – in the shape of a car chase that ends in a shootout – but mostly the film follows the beginning, middle and end of the book. In fact much of the dialogue and most of the characters are retained too, though considering that the novel itself is only 160 pages, it is interesting to consider how much still had to be cut down to fit a 90-minute running time. As the movie’s approach is fairly routine and we don’t really get to find out much about Hardy as a person, I’m not surprised that there weren’t any sequels (the very 80s synth score doesn’t help either), though the series of books would make for a great TV show. This is a modest, no frills, perfectly enjoyable movie from a well carpentered novel and apart from Brown is mostly notable for making the most of its locale, thanks largely to the work of John Seale, then and now one of the best cinematographers around (Witness, Dead Poet Society, The English Patient and the upcoming Mad Max reboot were all shot by him). For now Hardy continues only in print – but he certainly gets around a lot:

The Cliff Hardy series (so far):

DVD Availability: Sadly, this title is available … nowhere, except on VHS tapes made decades ago! This is a real shame, so for now I’m hanging on to my very old recording from TV.

I submit this review for Bev’s 2014 Silver Age Vintage Mystery Challenge Bingo in the ‘place in the title’ category – and my first bingo!