Posted on 9 September 2014 by Cavershamragu

Given how surveillance culture has jumped to the very top of the political agenda, I thought it might be intriguing, and possibly even salutary, to look at a novel and film that got there very early, even before the Watergate scandal made bugging the stuff of everyday meetings. Lawrence Sanders made his Edgar-winning debut with this satirical caper story, told entirely through transcripts of one kind or another with just the occasional contextual intro from the author.

I offer this review for Katie’s Book to Movie Challenge over at her Doing Dewey blog (for links, click here); Bev’s Vintage Silver Age Mystery Challenge; and Todd’s Tuesday’s Overlooked Film meme over at his Sweet Freedom blog.

Simons: “You want to hit one of the apartments?”
Anderson: “No, Mr Simons. I want to hit the whole building. I want to take over the entire f****ng building and clean it out.”

The eponymous recordings refer to John “Duke” Anderson, a hard man from Kentucky who enjoys some decidedly ‘unorthodox’ sexual practices and who is dedicated to his life of crime. For him, in life as in sex, there is no difference between straight and crooked – everything for him is completely ‘bent’ as he explains in his own imperfect hand:

Anderson: “We are all criminels. It is all just a  question of degree, like first, second or third degree.”

A book very much of its time, it posits an amoral, anti-authoritarian world view, where distinctions of right and wrong are completely irrelevant in the pursuit of personal liberation from the shackles of conformity and financial servitude through the acquisition of power though filthy lucre. After a stint in Sing Sing, Anderson starts seeing the recently divorced Helga Everleigh. She got her apartment, a luxurious

pad at 535 East Seventy-Third Street, as part of the settlement after the end of her marriage to a man who belatedly realised he was gay. But she is now making up for lost time with Anderson, who is into domination and S&M practices, the details of which we can only guess at since we only hear what they do through various wiretaps, with nothing ever actually described. Anderson on the other hand is mainly interested in the building, planning to knock it off from top to bottom in a plan worthy of Donald Westlake, though the tone here is much more abrasive, albeit laced with much black humour. The story is broken down into 94 chapters as we beaver away through the transcripts of all kind of surveillance – as Sanders laconically interjects at one point:

“At the time, these premises were under electronic surveillance from at least, and possibly more, law investigation agencies. Apparently there was no cooperation between these agencies.”

Anderson needs funds to get his crew together and ends up getting finance from the mob, not realising that they are probably more interested in seeing him fail than succeed – unfortunately for him they are all under some sort of surveillance, either by the FBI, the NSA, the police, even the IRS and the SEC are monitoring somebody who is connected with the job (in one delirious throwaway joke, it turns out that Anderson’s butcher is also under survelillance, from the FDA). However, because the agencies don’t talk to each other, nothing happens until the day of the hit, in which all the carefully laid out plans start to unravel when one of the residents, confined to a wheelchair and left in his own apartment, is able to send out a distress signal via ham radio. It is one of the strengths of the book that it manages to sustain the momentum of the story despite its unusual structure, which shifts with the arrival of the police – in the shape of Edward X. “Iron Balls” Delaney – realigning the point of view to the reports and communications from the ‘other side.’ Even so we are still curious to know what will happen next and see if Anderson and his crew of misfits will be able to get away. The odds are not in their favour though, so it is left to Anderson’s cynical old friend Ingrid, whose extreme sexual practices are the only way that he can truly ‘get out,’ to sum up what the book is really about:

Ingrid: “… I learned where the money was and where the power was. Then there was nothing I would not do. It was war – total war. I hit back. Then I hit first. That is very important. The only crime in this world is to be poor. That is the only crime. If you are not poor you can do anything.

This is an intelligent and funny novel that will probably still seem relevant to a lot of new readers. It was a huge hit in its day, setting up Sanders as the purveyor of increasingly long and sex-obsessed bestsellers, the best of them featuring Delaney, promoted from subsidiary character to central protagonist – here is the list of the series in which he appeared, in one of which (The Third Deadly Sin) the female serial killer is driven by a very extreme form of PMT (surely a literary first):

A film version was seemingly inevitable, though clearly the filmmakers would have to work very hard to handle this most unusual of texts …

In re-watching the film adaptation, what struck especially forcefully was how much this felt like a dry run for Dog Day Afternoon (1975), the later and much more celebrated collaboration between director Sidney Lumet and screenwriter Frank Pierson. Both are New York stories with a strong satirical edge in which a gang of armed men attempt to execute a robbery and end up taking several hostages. This leads to an extended stand-off with the police and an unhappy ending that emphasises the anti-authoritarian stance and a sympathy at the despair of those driven to the margins of society, expressed in part in terms of sexual difference. In most respects this is a faithful adaptation, albeit one that has to jettison the basic narrative conceit along with some purely cosmetic changes. To deal with the easy stuff first, Ingrid and Helga get amalgamated into a single composite character (‘Ingrid Everleigh’) with Dyan Cannon cast as the seemingly happy hooker who ultimately bails on Anderson when her other (better paying) boyfriend put the squeeze on. She thus exits the story at the halfway mark, never to be seen again, which is a real shame and completely alters the balance of the movie at the end. All the references to S&M and Anderson’s unorthodox sexual preferences have also been excised.

On the other hand the character of Tommy Haskins has been more or less been grafted onto the book’s Mann character and, as played by Martin Balsam, is turned into a flaming queen with a bouffant wig, which does grate a bit even making allowances for the vintage (speaking of wigs, it is said that this was the first film in which Connery played the leading role sans toupée – I think his earlier Lumet film, The Hill, got there first myself …). Dick Anthony Williams plays ‘Spencer’ more or less as he appears in the book (minus all the hipster rhyming slag though, maybe a good thing); Val Avery is perfect as the thuggish Parelli, as is Ralph Meeker as Delaney, very close to the book and very far away from how Frank Sinatra played the role in the 1980 film adaptation of The First Deadly Sin. 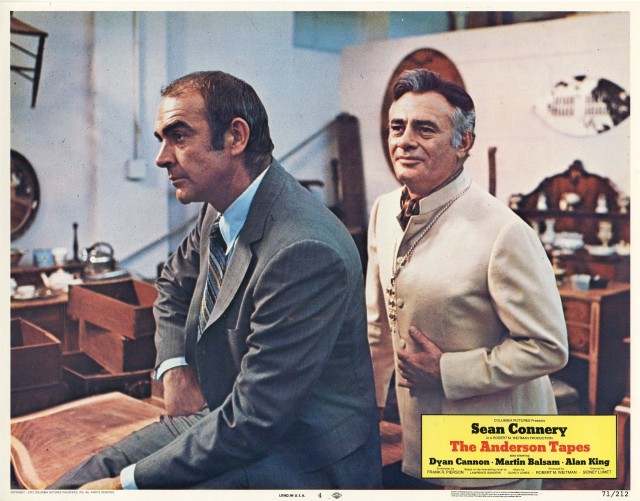 The rest of the crew has been changed completely, with Christopher Walken (in his debut) playing ‘The Kid’ and Stan Gottlieb as ‘Pop’, who were both released at the same time as Duke (now a ‘limey’ to explain Connery’s accent and whose prison term incidentally has been increased considerably to over 10 years). Now the hard bit – to try and keep a vestige of the original premise of the novel, Pierson and Lumet still have Duke and the others under surveillance, albeit mainly video rather than just audio, and the shifts in chronology in which the victims of the robbery recount in the past tense what happened to them as the rest of the narrative progresses in more linear fashion is also retained. The only thing is, it doesn’t work as well when divorced from the context of Sanders’ original storytelling device, coming across more obviously as a bit of a gimmick. Having all the tapes wiped at the end is a nice touch, but for those who haven’t read the book, it may seem a bit perplexing. Full marks for trying and for keeping so much of the dialogue and story, half marks for not finding a more complex cinematic form to match the narrative strategy of the novel (today of course you would just make all the film in popular ‘found footage’ style of The Truman Show, Chronicle, Cloverfield, Blair Witch, et al).

DVD Availability: Available on both DVD and Blu-ray in the US on a double-bill with the Michael Crichton thriller Physical Evidence starring Burt Reynolds (review coming to Fedora soon-ish), it is also easy to get as a standalone edition. All boast the same very good widescreen transfer with no extras whatsoever.

I submit this review for Bev’s 2014 Silver Age Vintage Mystery Challenge Bingo in the ‘amateur detective’ category as this role is in fact taken by Lawrence Sanders, who writes himself into the story, interviewing many of the (fictional) characters: