EDWIN OF THE IRON SHOES (1977) by Marcia Muller

Posted on 4 September 2014 by Cavershamragu

This was the first in the Sharon McCone series that so far has spawned 33 volumes. As debuts go this is a fairly traditional one but historically it remains a very important work as it is generally held to have established the female private eye in contemporary crime literature, certainly paving the way for the likes of Sara Peretsky’s VI Warshawski and Sue Grafton’s Kinsey Millhone.

“Damned fine woman. Ought to have been a man”

I offer this review as part of Bev’s 2014 Vintage Silver Age Mystery Challenge; and Patti Abbott’s Friday’s Forgotten Books meme over at her fab Pattinase blog.

“My attention went immediately to the chalk outline on the floor near the ancient cash register. It was not a very big outline: Joan Albittron had been a tiny woman.”

McCone is the staff investigator at the All Souls Cooperative and begins her first published case in the middle of the night with the discovery of a corpse in an antique shop. The shop belonged to the victim, Joan Albittron, who also owned some of the other real-estate on the street, which is currently in the process of being out under offer from several parties who want to develop the land. These include the powerful, self-made tycoon Cara Ingalls and shady bail bondsman Ben Harmon. But would that really be enough of a reason to bump off a little old lady who was so widely liked? And is the death linked to the spate of attacks the previous year on the shops in the street, and which McCone had previously investigated (with little success)?

“I don’t like being badgered by little girls playing detective” 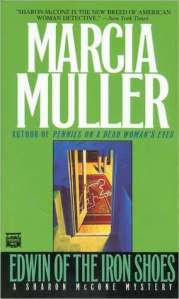 McCone, in time-honoured PI fashioned, immediately gets on the wrong side of the lead cop, Greg Marcus (he calles her ‘pappoose’ as she is one eighth Shoshone). She is ostensibly placed to complete an inventory of Albittron’s shop (that includes the eponymous statuette) but she is just itching to investigate the murder and is ultimately given three day’s grace to get it done or get out of Marcus’ hair. Things are slightly complicated by the fact that she is clearly attracted to him and by continuing problems on the street. The shop gets broken into several times and one of the other shops even gets set on fire – is there something of value hidden there? This seems unlikely as most of the stock was pretty cheap stuff that only attracted gullible tourists – is there perhaps a drug connection (her nephew died recently from an OD)?

McCone’s investigation eventually turns up a smuggling ring and includes a creepy chase through the fog – well, what kind of self-respecting San Francisco mystery would this be without one, right? There are also a couple more murders to be solved – but not before McCone and Marcus start to get much more friendly (which is certainly refreshing as its hardly what usually happens in hardboiled detective stories) – but can he be trusted?. McCone has to put up with a fair amount of sexist crap, which I suppose was to be expected in the unenlightened yesteryear of 1977. She is very much her own woman, but also pretty young and inexperienced (she keeps forgetting to eat her meals). As a callow youth she is unfortunately also prone to falling in with the most standard clichés of PI patois in her first person narration, which dates the book very much in the wrong way:

The plot is fairly straightforward and the list of suspects is not large, so one can’t expect a big surprise villain. Instead what we get is a serviceable plot that’s solidly constructed and a new type of private detective in McCone, who makes for an agreeable heroine who is always pleasingly plausible and far from perfect. I look forward to reading a lot more of her later cases as the critical consensus ‘out there’ seems to be that the books have grown in ambition since this modest introductory story.

TomCat posted a great review of this book just the other day over at Beneath the Stains of Time; and if you want to learn more about her and her author, visit the official website at: http://marciamuller.com/ 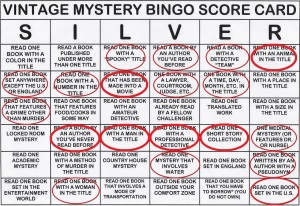