THE ABC MURDERS (1936) by Agatha Christie

Posted on 1 August 2014 by Cavershamragu 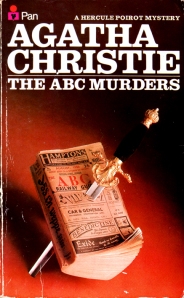 I realise this might be a bit controversial but I am here to praise both Christie’s classic ABC mystery and The Alphabet Murders, the zany 1965 movie version starring an improbably skinny Tony Randall as Poirot. Yes, it’s a broad comedy and yes, a lot has been changed from the book (including the identity of the murderer) but it’s also great  fun! Not persuaded yet? Let me try a little harder …

“Let us see, Mr Clever Poirot, just how clever you can be. Perhaps you’ll find this nut too hard to crack. Look out for Andover on the 21st of the month. Yours, etc., ABC.'”

This may well be Agatha Christie’s second best-known and most widely copied story after And Then There Were None (which I previously reviewed here) and it finds Poirot towards the end of his career, older if not exactly ready for retirement. Hastings has been off in Argentina running his ranch but is now back for a visit and they get contacted by what appears to be a madman (or mad woman) who is randomly killing people in alphabetical order, leaving a copy of the ABC train timetable next to each body. Thus, after

alerting Poirot to their intentions in advance by letter, ABC kills Alice Ascher in Andover, then Betty Barnard follows in Bexhill and Sir Carmichael Clark in Churston. Hastings’ narration of events alternates with third person descriptions of events in the life of one Alexander Bonaparte Cust, an itinerant salesman prone to blackouts after his experiences in the war. The stories converge in Doncaster when Cust is apprehended after a stabbing in a cinema. Is the story over – is he ABC? And what would have happened if the letter announcing the third death had not been delayed due to a typo on the envelope?

“Well I never,” he exclaimed. “if it isn’t Captain Hastings back from the wilds of what do you call it! Quite like old days seeing you here with Monsieur Poirot. You’re looking well too. Just a little thin on top, eh? Well, that’s what we’re all coming to, I’m sure.”

This is a novel written at the height of Christie’s powers in the 1930s and offers a brilliantly clever device that is beautifully developed, its apparent thriller storyline ultimately revealed to be a traditional whodunit after all. It also has a sort of celebratory feel with Poirot, Hastings and Japp all meeting up much later in their career amid references to old age, the passing of time in general and several links to other Christie books (including Three Act Tragedy / A Murder in Three Acts, which in some regards can be seen as including a dry run for the central ABC plotline).

The book has been ripped off umpteenth times but has also been adapted legitimately for TV, cinema and even video games over the years. If you want to see a traditional adaptation, and a very successful one at that, I urge you to view the David Suchet adaptation from 1992 co-starring Hugh Fraser as Hastings, Philip Jackson as Japp and Donald Sumpter, who is heartbreaking as the psychologically fragile Cust. For something more radical and adventurous though, you will need to hunt around (‘hunt’ very much the operative word unfortunately) and find a copy of the 1965 movie made by MGM British in the wake of their successful Miss Marple series starring Margaret Rutherford. In many ways in fact this is a case of the baton being passed with the same production crew – including producer Lawrence Bachmann, screenwriters David Pursall and Jack Seddon, composer Ron Goodwin, cinematographer Desmond Dickinson and art director Bill Andrews – transferring from one series to this new one (though sadly only one would be made). There is even a scene in which Miss Marple (and her friend Mr Stringer), played by Rutherford and her husband, meet Poirot and Hastings …

Despite the use of the same crew, the major difference here, presumably in a desire to add more than a touch of Inspector Clouseau’s antics to the mix, is the decision to  reunite the star and director of media satire Will Success Spoil Rock Hunter? (1957), Tony Randall and Frank Tashlin. Like that film, we begin by breaking the fourth wall and having Randall introduce himself directly to the audience. Standing outside the studio he is transformed with much use of makeup into Poirot but as the camera keeps following him, he tell it (us) to leave him alone as he is in London not to fight crime but to see his tailor (he is very nattily dressed here thanks to a wardrobe supplied by Hardy Amies). So the camera goes elsewhere – specifically to a swimming pool, where an ‘aqua clown’ is rehearsing his act and where he is killed by a poisoned dart fired by an air gun. In another ironic touch, after an ABC guide is flung into the swimming pool, his scream can still be heard even once he is under water. There are lots of amusing touches like that in a film that undeniably privileges fun over fidelity to the original text. 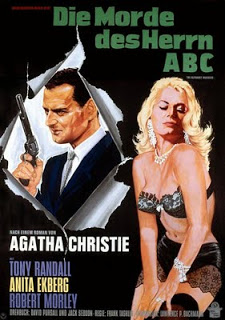 Utterly bizarre German poster that has nothing whatsoever to do with the way either actor appears in the film.

As this was meant to usher in a new series, Poirot, Hastings and Japp here all meet for the first time. Hastings (Robert Morley) works for the secret service and is tasked with safeguarding Poirot on his trip to the UK (he is clearly based in Belgium for the purposes of the film) and it is a running joke for the first hour that Poirot, who frequently gets himself arrested, keeps finding ways to elude his minder until the two finally decide to work together. There are comic set-pieces on horseback and in a steam room as Poirot is chased with maniacal  glee by Amanda Beatrice Cross (Anita Ekberg, who appears dubbed throughout) who claims to be the murderer. It turns out she is under a physician’s care and is therefore a version of the Cust character, though she decidedly cuts a much more glamorous and flamboyant figure than the character in the book.

This inverts the trajectory of the book, in which she is now chasing Poirot in the grip of some sort of mania – but is she really the guilty party? After a climax high above the Thames, Hastings and Poirot head for a train journey in which all is cleared up – or a bit anyway. There are some very amusing in-jokes, like having former 1930s Poirot actor Austin Trevor have an extended cameo as a butler, and lots of visual invention as Tashlin does almost anything to keep viewers off-balance – one dialogue scene with suspect Julian Glover takes place in between the snores of his sleeping wife, while the first meeting between Poirot and Hastings is filmed so that their mouths are disconnected from their faces via the strategic placing of a mirror.

Tashlin, before making many of Jerry Lewis’ best comedies and my second-favourite cowboy spoof, Son of Paleface with Bob Hope, worked in cartoons over at Warner Bros and there is much of that sort of scattershot energy here. It makes for a very swinging 60s and madcap take on the material and Randall as the crotchety, beaky and bald Poirot (courtesy of some clever work by uncredited makeup artist, Stuart Freeborn, though there were rumours that Randall was already in private life a bit more follically challenged than he normally appeared …) actually does very well here. I had a great time with it and I just wish the team had made several more frankly. I hasten to add that I am well aware that this is a minority view …

DVD Availability: Sadly this appears to be completely AWOL though it did appear on VHS once upon a format ago … I have no idea why it is unavailable but as a result I have kept a close guard on my copy from TV for well over a decade now …

I submit this review for Bev’s 2014 Golden Age Vintage Mystery Challenge in the ‘made into a movie’ category – and it’s my first bingo too!

46 Responses to THE ABC MURDERS (1936) by Agatha Christie