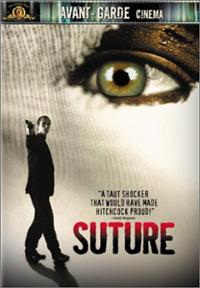 This complex mystery is in a literal, thematic and metaphorical sense, a true piece of black and white cinema. An experimental indie movie that riffs smartly on the Film Noir genre, this is a cleverly plotted murder mystery about amnesia and identity in which what we see as an audience is radically different from how the characters perceive the world they inhabit. We begin with two men, one white and one black, one stalking the other, seemingly about to kill each other. During this we listen to a lecture about amnesia. Just as a shotgun is poised to go off, we flash back to the beginning of our tale, and understand something truly disorienting  …

“How is it that we know who we are? We might wake up in the night disoriented and wonder where we are. We may have forgotten where window or the door or the bathroom is or who is sleeping beside us. We may think perhaps that we have lived through what we just have dreamed of.  We may wonder if we are now still dreaming. But we never wonder who we are … But it makes no sense to begin this story here without its history, its past. So, let me take you back to a proper beginning, to a time before identity has been confused” – Opening voiceover by Dr. Max Shinoda (Sab Shimono)

This is the story of two half-brothers who bear an uncanny resemblance to each other and who never met until their father dies. Clay (Dennis Haysbert) comes from a poor background while Vincent (Michael Harris) is hugely wealthy. After meeting at the funeral, Clay is invited by Vincent to his palatial new home in LA. Clay says he doesn’t want anything except to make contact, though Vincent is clearly wary.

Indeed, Vincent is pretty much an annoying little jerk all round, condescending and effete with a truly stupid-looking ponytail to boot. While Clay is in the shower, he swaps his ID documents with him and then says he has to leave for an urgent flight. He has Clay put on his clothes and accept his watch as gift and asks to be taken to the airport. Vincent then calls Clay on the car phone and apologises, saying that he had no other way out.

“Our physical similarity is disarming, isn’t it?”

Before Clay can ask what he means, the bomb under the car is detonated by the phone call and Vincent walks away, to all intent and purposes apparently now dead and no longer a suspect in his father’s murder.

However, Clay amazingly survives the explosion, but loses his memory – having been setup to be mistaken for his half-brother, when his face is reconstructed it is made to be exactly like that of Vincent. Clay is now the object of the affection of his plastic surgeon (Mel Harris) and is being watched by the police, as he is still the number one suspect in his father’s shooting, though some question if the shooting was not murder but a robbery gone awry; in one amusing sequence, one of the new men on the squad questions if even the car explosion was not another murder attempt but something else …

“I’ve seen a lost of suicides. Poisons, gas, narcotics, leaping suicides, suicides with guns, handguns, rifles, shotguns, not to mention suicides with automobiles but never have I seen a suicide with a self-activated remote control car bomb”

So, Clay thinks he is Vincent, a man who was a loner and widely disliked and has to wrestle with the possibility that he may be guilty of his father’s murder – but will he regain his memory? He seems to have only one old family friend, played by the delectable Dina Merril, who tries to tell him about what his old life was like but who also wonders if he really wants to remember it. As the police investigate and he speaks to his psychiatrist (Sab Shimono) he begins to have dreams which slowly develop into memories of Clay’s earlier life – but who is the person now following him in a car? And why is old family friend Merril starting to look at him so strangely after looking at his back?

Informed by the theories of Lacan, and with the central surgeon named Dr. Renee Descartes for the celebrated 17th century French philosopher, this is clearly a film with some very esoteric ideas on its mind, all of which pays off with the Shinoda voiceover that bookends the films. But the main ace up its sleeve is the casting of Haysbert and Harris as two nearly identical brothers in the story, though the men in question don’t look anything alike, and not just because one is Caucasian and the other African-American. This adds a fascinating additional visual layer to this tale of identity theft by introducing a racial element that matches the stark black and white cinematography and the matching design and finds a clever method to unsettle the viewers in a way that matches the discomfort of the protagonist. If you can find it, this a great thriller that easily deserves 95 minutes of your time and will also give you something to chew on after the end credits have finished rolling

DVD Availability: A barebones release is available in the US and is well worth getting until something in HD finally comes along …

This entry was posted in Film Noir, Los Angeles, Noir on Tuesday, Scene of the crime, Tuesday's Overlooked Film and tagged Dennis Haysbert. Bookmark the permalink.