Posted on 9 May 2014 by Cavershamragu

Published after the release of the popular film of the same name, this book by Graham Greene is slightly unusual – it is not a screenplay (and indeed it varies from the finished film in many ways) and it is not a novelisation either. It is a genuine novella that Greene wrote before embarking on his screenplay, though it was not originally intended for publication. It is a gripping thriller, superbly told, and in Harry Lime created an immortal anti-hero …

“The Third Man was never written to be read but only to be seen.” – Greene, from his forward

Graham Greene is probably my favourite 20th century author and I have re-read most of his impressive corpus several times over the decades (and yes, some reviews of his books and films are coming to Fedora quite soon). Famed for his religious themes, he also made great use of the thriller formula and had an uncanny ability to foresee upcoming political hotspots and then use them as background for his ultra topical subjects for his books – best of all, he remains indelibly linked with the creation of an original and distinctive mind-space location dubbed ‘Greeneland.’ My affection though also stems from the markedly cinematic qualities of his work, from his highly visual presentation of people and places that in some cases even seems to replicate movement in the style of tracking shots and standard editing patterns. Indeed, I would argue that he was more involved with the cinema than any other major novelist of his generation. In the 1930s while establishing his literary reputation he was also working in parallel as a screenwriter and as a film critic – ultimately practically all of his novels and short stories were adapted for the screen. In a career spanning sixty years, of his twenty-six full-length fiction books (with the necessary exclusion of Rumour at Nightfall and the Name of Action, the two titles he 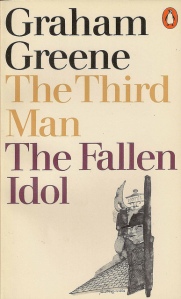 suppressed and refused to have republished or to sell the film rights to), all but three were adapted for the screen: It’s a Battlefield (1934), A Burnt-Out Case (1960), possibly my favourite of his books, and his final novella, The Captain and the Enemy (1988). That’s an amazing batting average, especially when you consider that most of his short stories were adapted too, leading to such fine films as Went the Day Well? (1943) and best of all, Fallen Idol (1948). It was the success of the latter, made in collaboration with director Carol Reed, that led to The Third Man, which reunited writer and director and which they developed together before Greene wrote a full prose version as a short novel on which his screenplay was eventually based.

“One never knows when the blow may fall”

Dozens of films and TV shows have been adapted from Greene’s work – and some, including such major works as Brighton Rock, The Power and the Glory, The End of the Affair and The Quiet American, have all been filmed more than once. Perhaps predictably, more commercial ‘entertainments’ like A Gun for Sale have been filmed many, many times (at least 6 versions exists according to IMDb). Greene’s ‘entertainments’ are not necessarily that easy to discern from his weightier novels but undeniably those that use the thriller formula have been among the most popular. Most people know the basic outline of The Third Man, perhaps still his best-known single work: Harry Lime is thought dead and his best friend Holly (originally named Rollo in the novella)

comes to Vienna and sets out to discover who killed him; he falls for Lime’s old girlfriend Anna, and finds out that his friend isn’t dead at all but hiding out due to his involvement in illegal smuggling, leading to a memorable chase in the sewers at its climax. This prose version, which in print is usually accompanied by Greene’s short story The Basement Room (the basis for Fallen Idol), is told from the point of view of Colonel Calloway (later a major as played by Trevor Howard). A number of incidents, like Anna being kidnapped by the Russians, were ultimately never shot, while other sequences were embellished on set, such as Welles’ celebrated line about cuckoo clocks (which Greene graciously and readily admitted the actor wrote).

“Like the fella says, in Italy for thirty years under the Borgias they had warfare, terror, murder, and bloodshed, but they produced Michelangelo, Leonardo da Vinci, and the Renaissance. In Switzerland they had brotherly love – they had five-hundred years of democracy and peace, and what did that produce? The cuckoo clock. So long Holly.”

Beautifully shot on location by Robert Krasker in full expressionist mode with heavy use of weird angles and looming shadows backed by Anton Karas’ distinctive if often rather oddly undramatic zither score, this is also a wryly humorous tale in which Holly blunders around trying to find out why Lime was killed while everyone tries to stop him making a fool of himself. This is seen at its best in the scenes in the film with Bernard Lee (a sergeant who it turns out is a fan of Holly’s westerns) and when the writer is apparently kidnapped but is in fact only being delivered to a lecture he has agreed to give at a literary event organised by an organisation like the British Council (they mixed him up with another, more literary, writer). This then turns sinister in what ultimately seems a rather similar sequence to the stump speech adventure in Hitchcock’s film The 39 Steps. This is a story that cannily plys with our expectations time and again. We assume that Holly / Rollo and Anna

will end up together because that is the logic of the movies, but the naive American just doesn’t understand either the political complexities of the situation in Vienna nor the depth of Anna’s feelings for Lime, no matter how big a villain he turns out to be (and make no mistake, he’s a charmer but also a dangerous cynic and utter, utter bastard). But Greene’s strongly ironic plot and fine characterisations and Carol Reed’s exceptional feeling for mood and place make this a classic movie and the novella is one of the most purely entertaining of Greene’s self-styled ‘entertainments’ – if you haven’t read it, or the seen the movie, you really should.

The film was deservedly a smash hit (the theme tune alone was a genuine phenomenon, even inspiring a dance, the ‘Harry Lime Two-step’) and was later spun off into a popular TV show starring Michael Rennie. Perhaps more surprisingly, Welles later revived his role for radio in the prequel The Lives of Harry Lime (aka The Adventures of Harry Lime), all 52 episodes of which of are available online for free from the Internet Archive. It’s a pretty decent show actually, and makes good use the Karas zither music – and all begin with the memorable intro from Welles, after the sound of a gunshot:

“That was the shot that killed Harry Lime. He died in a sewer beneath Vienna, as those of you know who saw the movie The Third Man. Yes, that was the end of Harry Lime but it was not the beginning. Harry Lime had many lives. And I can recount all of them. How do I know? Very simple – because my name is Harry Lime”

If you are interested in learning more about Greene’s involvement with the cinema, I recommend Gene D Phillips’ Graham Greene: The Films of His Fiction and Quentin Falk’s Travels in Greeneland, along of course with Norman Sherry’s monumental, three-volume biography of the author. I’ll be reviewing more of Greene’s novels here at Fedora soon. For a really detailed look at the film, you should head over and read Colin’s fine review at his Riding the High Country blog.

DVD Availability: There are plenty of DVDs and Blu-rays out there as this is a film that has always looked good on home video and has been easily available – just take your pick, you won’t be disappointed.

I submit this review for Bev’s 2014 Golden Age Vintage Mystery Challenge Bingo in the ‘Set outside the US and UK’ category: