THE CASE OF THE LUCKY LEGS (1934) by Erle Stanley Gardner

Posted on 7 March 2014 by Cavershamragu

The third in the Perry Mason series is set in the world of crooked beauty pageants and hails from back when the character was a pretty hardboiled lawyer who spent most of time racing around outside the courtroom.

“Never mind the hard luck story,” Mason said. “Go ahead and tell me what happened, and make it snappy, because I’ve got places to go.”

In reading these early Mason cases, originally published in Black Mask magazine, one immediately notices how much less cozy the relationship between Perry Mason, Paul Drake and Della Street is, not to mention the fact that prosecutor Hamilton Berger had yet to appear. Indeed, one of the interesting things is how formal it all is – the central trio not only tend to refer to each other by their full names but Paul and Perry even end up slightly at odds, with the lawyer turning to another detective agency to keep an eye on one of Paul clients! The plot is convoluted rather than complex and there is a sense that often Gardner 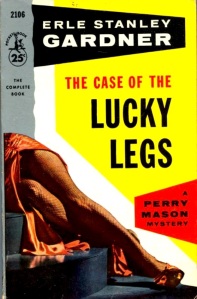 does make things unnecessarily elaborate. For instance, at one point he has to smuggle a witness out of a hotel. To do it he has to coax her out of her clothes and into bed, then teach her how to pretend to chew gum, then pretends to be drunk so he can get a large trunk out of the hotel’s storage room, then gets her to climb in and thus transports her back to the city. This goes on for pages and is amusing in fairness but very over-extended too and adds absolutely zero to the plot. The storytelling is also intensely verbal with practically no action but with events being relayed over and over again, to a degree on suspects reflecting the fact that Gardner dictated his fiction – one way or another, it always feels like someone is telling you a story here.

“The mask of patient tranquility dropped from Perry Mason. He flexed his muscles, His eyes became hard, like the eyes of a cat slumbering in the sun who suddenly sees a bird hop unwarily to an overhanging branch. “

So, the plot: Mason is sent a letter from a woman named Eva Lamont saying she needs his services, but a man named Bradbury turns up instead, saying he used the alias to cover his tracks. A friend of his, Marjorie, won a movie contract at a ‘Lucky Legs’ contest, but the local town was fleeced by promoter Frank Patton, who weasled out of getting her on film. It turns out he has done this several times but Marjorie never came back. Bradbury wants Perry to find her and prosecute Patton – he thus hopes to marry Marjorie, though he has competition in this department from a local dentist, Dr Doray, who also loves the girl with the pretty gams. Drake tracks down Patton and Mason arrives in time to see Marjorie leave the apartment. When he gets there he find the man stabbed to death and evidence pointing to Marjorie and another woman who was the victim of his scam having had an appointment to see him. As the cops are on the way, Perry locks the door and pretends to have just arrived. He then finds Marjorie and her friend Thelma Bell and is 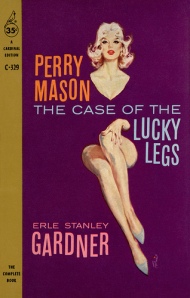 immediately suspicious as they are both getting washed as he arrives – where they washing blood off their clothes? Marjorie is spirited away to a hotel and Thelma offers to act as a decoy with the cops as she says she has a solid alibi. Complications then ensue as Bradbury becomes very demanding in terms of Mason’s tactics, especially after it turns out that Patton was killed with a knife bought not long before by Doray. But Mason is unconvinced by the setup – for one thing, why was there a blackjack at the scene of the crime? Then it turns out that there really is an Eva Lamont, but who is she really working for? Pretty soon the cops are after Perry for tampering with the evidence at the scene of the crime and then Marjorie skips town – how will he get out of it?

Della Street: “Chief,” she said, “Why don’t you do like other lawyers do?”
Perry Mason: “You mean plant evidence, and suborn perjury?”

Perry never gets inside the courtroom in this novel though he does provide, at the conclusion, a summing up to the police in the form of a ‘confession.’ The case is not too tough to crack given the paucity of characters though there is lots and lots of movement and the pace keeps the book ticking over very nicely and Bradbury in particular comes across as a strong and vivid character in his own right while the tone is essentially light and breezy throughout. When it was turned into a movie it became a full-out comedy, but without having to change all that much if truth be told.

In November 1935 the New York Times had this to say about the film version of The Case of the Lucky Legs:

A gay, swift and impertinent excursion into the sombre matter of murder … at once the best of the Erle Stanley Gardner collection and deserves being rated close to the top of this season’s list of mystery films … And there’s never a dull moment.

The Perry Mason movie series (1934-37)
The book has been filmed twice: the first was in 1935 when it became the third in Warner series starring Warren William (I previously reviewed the second instalment, The Case of the Curious Bride, here) and then again in 1959 when it was adapted for the third season of the Raymond Burr TV show. Warners started the series with high hopes and the first three are definitely 8-reel A-pictures with first-rate directors and casts – after that the returns must have been a little disappointing as the series got downgraded to co-feature status. Running times got cut down by about 15 minutes each to last about an hour on the second half of the double bill. The first four starring Warren William as Mason are definitely the cream of the crop, climaxing with Perry and Della actually getting married! This was reversed after William left with Della single again when she appeared first opposite Ricardo Cortez as Mason and then Donald Woods, who had previously played a suspect in Curious Bride (which I previously reviewed here) 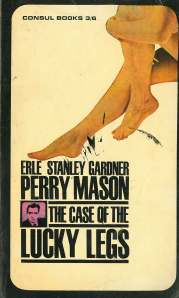 Relocated to San Francisco, this film follows on directly from Bride (albeit with a noticeably lower budget) with Allen Jenkins providing comedy support as ‘Spudsy’ Drake but with a new Della in the mirthful shape of Genevieve Tobin, a lively actress who retired shortly afterwards after marrying Warner contract director William Keighley. Lyle Talbot, always reliable when playing a stuffed shirt, is perfectly cast as Doray while Porter Hall makes for a much gentler version of Bradbury compared with the forceful character in the novel. The plot is tightened up but followed very closely, though Perry here is very much in the emerging screwball tradition, forever cracking jokes and refusing to take anything seriously – a million miles away from the hardboiled character in the novel. The film is even more fun than the book and at under 70 minutes never outstays its welcome. It’s not as good as Curious Bride (which it name-checks incidentally) – the settings are cheaper and it badly needs the pace and pep that director Mike Curtiz brought to the earlier film, but there are plenty of compensations in the frivolous humour. Well worth an hour or so of your time.

DVD Availability: The film is available in a no frills but extremely well-preserved edition courtesy of the Made on Demand Warner Archive series (which I previously profiled here).

I offer this book & film review as part of Bev’s 2014 Vintage Mystery Challenge in the Golden Age bingo in the ‘Lawyer’ category: 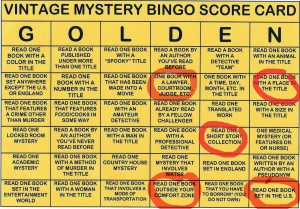