THE DROWNING POOL (1950) by Ross Macdonald

Posted on 8 November 2013 by Cavershamragu 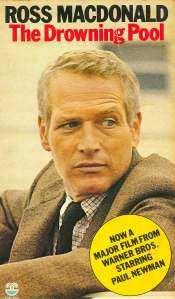 This is the second of eighteen books featuring Lew Archer, the California PI created by Kenneth Millar, first published under his soon to be shortened pen-name, ‘John Ross Macdonald.’ It was also the first of the series that I read, so I have always had a great sentimental attachment to it. It starts with a damsel in distress, albeit a very conflicted one …

I offer this review as part of the 2013 Book to Movie Challenge at the Doing Dewey blog (for all reviews, click here); Bev’s 2013 Vintage Mystery Challenge in the ‘Murderous Methods’ category; and Patti Abbott’s Friday’s Forgotten Books meme, which today celebrates the work of Ross Macdonald over at her fab Pattinase blog.

“Someone is trying to destroy me!”

Maude Slocum comes to see Archer when she opens a letter addressed to her husband (she says they regularly open each other’s mail). In it she is accused , in somewhat flowery language, of adultery, a fact she won’t confirm or deny but asks Archer to investigate none the less. She apparently has nothing to hide from her weak-willed husband James but is much more concerned of what would happen if the news reached her mother-in-law, Olivia Slocum. She holds the purse string and keeps them very tight indeed, her only concession being for Maude’s teenage daughter, Cathy. Despite her reticence, Archer likes Maude and so agrees to help. 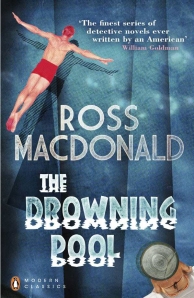 Olivia’s property, out in Quinto in the Noval Valley, is sitting on vast oil deposits but she is unwilling to allow any drilling, incurring the wrath of Kilbourne, an unscrupulous businessman, On the home front, things are complicated. James, idolised by his daughter, is clearly gay and utterly ineffectual as a husband yet seems to need Maude at any cost. The chauffeur, Pat Reavis, has been hitting on Cathy and subsequently gets fired after one attempt too many. That night, after a minor psychodrama masquerading as a cocktail party, Olivia is found dead in the swimming pool and Reavis is the prime suspect. Archer tracks him down in Las Vegas and also finds a connection with Kilbourne, who is clearly a very dangerous man.

“I thought you were working for me?”
“I work for myself.”

Archer tries to bring Reavis back to town, even though he doesn’t think he killed the old woman but is attacked en-route by a masked gang. He survives, but Reavis is not so lucky, getting himself burned to a crisp. The local Chief of Police, Ralph Knudson, is happy to let the case end there but Archer knows that his corrupt deputy Franks is in Kilbourne’s employ and had Reavis killed.  Through Kilbourne’s deeply unhappy wife, Mavis, Archer gets perhaps too close to the oil magnate and barely makes it alive out of the hydro room, the eponymous ‘drowning pool’. Then another one of the Slocum family turns up dead in what appears to be either suicide or an exceptionally clever locked room murder – if not Kilbourne’s agents, then who is responsible, and why – and who sent the anonymous poison pen letter than started the whole story?

“… the Archer books, the finest series of detective novels ever written by an American” – William Goldman, writing in the 1969 New York Times Book Review 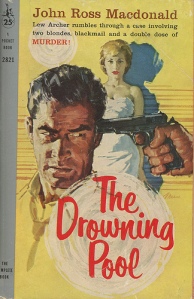 This is undeniably an early work (incidentally, dedicated to Anthony Boucher) and the debt to Chandler in terms of plot and characters is patently obvious (especially The Big Sleep, which I previously reviewed here), especially in the equivalent characters for gangster Eddie Mars and his wife (the Kilbournes) and Rusty Reagan (more or less Reavis), while the solution to the murder certainly has much in common with it too. In addition some sections are over-written and as a result pretty unconvincing. At one point, after listening-in on a particularly brutal confrontation between the Slocums, Archer staggers away describing it as if it were an episode from the pits of hell. Religious metaphors and imagery abound but the novel can’t really support the weight.

Even if Millar is still feeling his way in the genre, what does impress already is his confident command of plot and feeling for character and place. It also makes for a fascinating read as it has so many of the elements that will later come to be recognised as being so distinctive to the mature Macdonald novels from the late 50s such as his focus on the despoilment of the natural environment (in this case by rapacious oil companies) and an early taster of his fascination with the Oedipal theme and feeling for the growing pangs of young people trying to find their place in the world when they come from a fractured or broken family background. The final solution to the crime is ingenious though, as Patrick pointed out at his blog, At the Scene of the Crime, not especially fair to the reader in terms of clues – but does this matter in a hardboiled mystery? The characters are vivid, the setting impressive, the themes strong and the plot very carefully constructed. A decent book that could have made for a pretty decent movie, but that’s another story (review of the 1975 film adaptation starring Paul Newman and Joanne Woodward coming next week).

47 Responses to THE DROWNING POOL (1950) by Ross Macdonald