DEATH IN CAPTIVITY (1952) by Michael Gilbert

Posted on 25 October 2013 by Cavershamragu

The unusual background for this superb locked room mystery is a POW camp in Italy, loosely based on the author’s own experiences during the Second World War. It was filmed with Richard Todd in 1959 as Danger Within, the book’s US title, and contrasts a murder mystery in a time when civilians and soldiers died daily by their hundreds.

I offer this review as part of Bev’s 2013 Vintage Mystery Challenge in the ‘Locked Rooms’ category; the 2013 Book to Movie Challenge at the Doing Dewey blog – for links to other participants’ reviews, click here; and Patti Abbott’s Friday’s Forgotten Books meme over at her fab Pattinase blog.

“Quite simple, quite straightforward, and plain bloody impossible”

Michael Francis Gilbert (1912-2006) was briefly a schoolteacher at Cathedral School in Salisbury while studying for his law exams before the outbreak of war, where he served in the Royal Horse Artillery before being taken prisoner in North Africa. Together with Lieutenant Anthony P. Davies he attempted to escape from a POW train but was recaptured and taken to an Italian camp in the Po Valley. After the Armistice, Gilbert and Davies, together with another friend, Captain Dominick Stuart ‘Toby’ Graham, made a huge trek of some 800 kilometres to reach the Allies in the south and took part in the battle for Monte Cassino in early 1944. Gilbert’s Death in Captivity fictionalises some of these events and was dedicated to Davies and Graham. The story is set in the summer 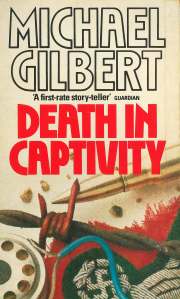 of 1943 in the lead-up to the Allied landings in Sicily and is all seen through the eyes of the prisoners held in ‘Campo 127’, overseen by the smiling villain that is Captain Benucci, who seems to always be one step ahead of the prisoners. Gilbert’s tone is essentially light and I laughed out loud at some moments, such as when some of the men become furious after their rugby posts get nicked / requisitioned to help shore up a tunnel – but this is not a comedy. In the camp there is factionalism between those who try to escape at all costs and those who simply want to survive – beneath the often ironic surface we are well aware that this is war and that people die all the time and as news of a possible landing in the south mounts, the Fascists start to get fidgety.

“There was no doubt about it: Captain Benucci was a four letter man.”

The story centres around the murder of Cyriakos Coutoules, a reputed informer who was already being kept in isolation for his own protection. But his body was found deep inside a tunnel in a different hut – how is this possible? The opening is hidden by a huge stove that requires four people to lift it and any movement at night would have been spotted either by the guards or by the prisoners and yet no one saw anything – truly an impossible crime, no? The decision is made to move the body to an expendable tunnel so as to not 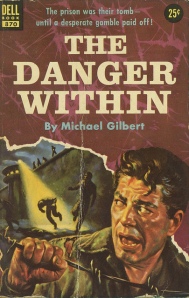 give away the position of the still viable one in which the body was found. Captain Henry ‘Cuckoo’ Goyles, a character Gilbert seems to have based slightly on himself, is tasked with solving the crime but before he can make much progress Benucci arrests Captain Byfold as his fingerprints were found on the scene – which is true because he moved the body from the first tunnel. He is sentenced to be executed by firing squad but who is really guilty? And how can Benucci always know what is going on – is there in fact another spy in the camp? As further escape attempts fail, a guard with information to sell apparently accidentally shoots himself and accusations of betrayal start to fly, it is up to senior officer Colonel Lavery to try and keep the men organised long enough to engineer a mass breakout.

“It can’t be Goyles,” said Baierlein, “he’s the detective in the story. And Byfold has been arrested for the crime by the Italians, so by all the canons of detective fiction he can’t be guilty.”

Over the years, the book’s originality has perhaps been diluted slightly by books and movies that have taken a similar approach (a recently example can be found in John Katzenbach’s 1999 Hart’s War, later filmed with Bruce Willis), which is a bit of a shame. It is undeniable though that the infiltrated traitor is reminiscent of Stalag 17 (which I reviewed here), while the various tunnelling stories, leading to a climactic, camp-wide escape, recalls the Steve McQueen epic The Great Escape. While both the celebrated

movie adaptations came out after Gilbert’s book (and its own film adaptation), in fairness one should point out that the source works came out at around the same time: Stalag 17 was first produced on Broadway in 1951 while Paul Brickhill’s Great Escape book came out the year before. Like Gilbert’s, all of these were based on the real-life experiences of the original authors and predictably arrived a few years after the end of the war. Gilbert however deserves great credit for his seamless blending of a fair play whodunit, impossible crime and an exciting story of wartime escape, told with a steady hand and a fine line in dry humour. There are lots of surprises in this superb and unusual book and should please even the most discerning of mystery fans.

To read more about Gilbert’s life and work, check out Martin Edward’s splendid essay at his blog here; Jack Adrian’s fine obituary for the The Independent can be read here while Rue Morgue Press published an exemplary guide by Tom and Enid Schantz to his work, and the fact behind the fiction of this novel, on their website:  www.ruemorguepress.com/authors/gilbert.html

I’ll be posting my review of the highly entertaining film adaptation very shortly.

34 Responses to DEATH IN CAPTIVITY (1952) by Michael Gilbert