Posted on 14 October 2013 by Cavershamragu

Kenneth Fearing (1902-61), modernist novelist and proletariat poet, was driven by a strong social conscience. When subpoenaed in the 1950s and asked if he was a Communist, he replied, rather splendidly, “Not yet.” Of his seven crime novels, The Big Clock remains the most famous, smartly merging a strong suspense plot with his progressive agenda together with a biting social critique as our anti-hero gets squeezed almost beyond endurance.

I offer this book & film review as part of Bev’s 2013 Vintage Mystery Challenge in the ‘Size Matters’ category; the 2013 Book to Movie Challenge at the Doing Dewey blog – for review links, click here.

“Our man is somewhere out there. It’s a simple job. Get him.” – Steve Hagen to George Stroud

Fearing supported his main work as a poet by producing pulp fiction (under various guises, including as by ‘Kirk Wolff’) as well as the crime novels under his own name for which he is known best today. The Big Clock was his greatest hit and sold immediately to the movies, becoming the fine film noir of the same title released in 1948 (see below). As with all his novels it uses several first person narrators, though the voice that predominates here is that of George Stroud, its highly flawed central protagonist who has to fight his way out of a web partly of his own devising.

“She was tall, ice-blonde, and splendid. The eye saw nothing but innocence, to the instincts she was undiluted sex, the brain said here was perfect hell.” – George Stroud on Pauline Delos

Stroud is the editor of Crimeways, a magazine published by the Janoth publishing empire located in a towering New York skyscraper. He is the Everyman of this story, a fact emphasised by naming his wife Georgette and their daughter Georgia. They are trying for another baby, which doubtless would be a George Jr. This is not to say that he is colourless but Fearing just means that he is no hero, just one of us. Indeed George is not exactly admirable – smart and with good taste in fine art (his love of the paintings of minor artist Louise Patterson proves crucial to the story), he is also a heavy drinker and a serial philanderer, keeping a room in the city for his affairs while telling his wife that he is working late.

Stroud meets Pauline Delos at a party and soon they begin an affair despite the fact that she is the mistress of his boss, publishing magnate Earl Janoth, a character clearly meant to resemble right-wing publisher Henry Luce. Fearing had briefly worked at the latter’s flagship Time magazine (echoed in the title of this novel of course) and there is a strong satirical edge to the depiction of the stable of Janoth publications, all of which have equivalents with Luce’s periodicals. Thus instead of Life, Sports Illustrated, Fortune et al we have Newsways, Commerce, Plastic Tomorrow, Homeways, Personalities, Futureways, Sportland etc. Fearing’s theme is the way that such an environment is representative of the social conformity that time-serving workers end up having to adhere to. One of the best bits of the book revolves around its exploration of the idea of ‘funded individuals’, people capitalised to the tune of approximately one million dollars out of a pool which would lead, we are told, to the possible eradication of crime like any other disease while institutions would make huge profits from their financial investment in people of talent

“Hagen was a hard, dark little man whose soul had been hit by lightning, which he’d liked.” – George Stroud

Janoth is having problems with his board and returns from Washington to visit Pauline in a bad mood, just as Stroud is leaving her, though he doesn’t recognise the man in the shadows. The two get into a jealous row – it emerges that she is bisexual and when he reminds of her of a past indiscretion with a girlfriend, she retaliates by suggesting that he is having an affair with Steve Hagen, his clearly gay deputy. Janoth snaps and clubs her to death. When he finds some composure, Janoth goes to see Steve, who convinces him not to give up and instead try to pin the crime on the unknown man he saw leaving her apartment. So they turn to Stroud, their expert on missing persons, to head up the manhunt, unaware of course that he is the man they want.

“What about you and Steve Hagen?” – Pauline Delos to Earl Janoth

The forthright depiction of some of the characters’ sexual orientation is pretty startling for the time, as is some of the strong language used throughout. This is all very welcome in the name of modernism and plausibility, though one might fairly question the fact that the villain and victim are the sexual outsiders – but the fact is that Stroud is no hero either and Julian Symons is thus surely right when he characterises him as being “technically innocent but morally null.” Stroud realises that Janoth must be guilty of the crime and that he and Hagen are trying to cover it up by either blaming her mysterious lover or, more likely, kill the only person who witnessed Janoth’s presence at her flat that night. Thus we reach the crux of the story as Stroud has to seen to employ all the resources being given to him but still find a way to get out of it without incriminating himself. Things get complicated when the artist Louise Patterson, whom he met at a gallery with Pauline the night of her death, is found and offers to identify the man who bought one of her pictures – he even has another one of hers hanging on his office wall and starts to worry about when somebody will notice that the profile of the unknown man who is being built up describes him very closely.

“The customer was a big, monolithic brunette, sloppily dressed and with a face like an arrested cyclone.” – George Stroud on Louise Patterson

Stroud is ultimately seen entering the building by one of the witnesses to his assignations with Pauline, albeit without being formally identified, so a floor-to-floor search commences so he isolates himself in his office, stalling for time (sic) – will he make it out alive? The suspense is handled just as well as the satire and as we switch narrative voices, including chapters narrated by Janoth, Hagen and Patterson, this builds up very successfully even if we are not sure if we like our hero and may even feel a bit sorry fo the way that the mighty Janoth is being bullied and manipulated by Hagen. This remains one of my favourite thrillers of the era, even the deus-ex-machina finish having been well-prepared for, and I included it in my ongoing list of Top 100 Mystery Books and on re-reading it see no reason to change my opinion – its subversive wit and suspense remain undimmed since my first encounter with it a quarter of a century ago. The 1948 movie version is almost as good too …

The book has been adapted for the cinema three times. The first and most faithful was the film of the same title, a little gem by the team of director John Farrow and writer Jonathan Latimer (which I profiled here) and released in 1948. It boasts a terrific cast that is superbly suited to its role, most notably Ray Milland as Stroud as he was so often at his best as anti-heroes with a roving eye; Charles Laughton is simply perfect as the slightly campy Janoth, here made into a man truly obsessed with the minutiae of time, adding an extra layer to the story. The movie is narrated solely by Stroud and told in flashback with him literally trapped inside the huge clock that dominates the inside of the Janoth building – after an elegant shot sweeping us through the Janoth building late at night, we then go back 36 hours to see how he ended up on the run.

Pauline: “You know, Earl has a passion for obscurity. He won’t even have his biography in ‘Who’s Who’.”
Stroud: “Sure. He doesn’t want to let his left hand know whose pocket the right one is picking.”

Predictably in the film he remains faithful to his wife (Maureen O’Sullivan, who incidentally was married to director John Farrow at the time), instead just going on a bender with Pauline (her surname now changed to York for some reason) after losing his job when he refuses to give up his vacation for the umpteenth time. Latimer adds a lot of his trademark humorous dialogue in the script 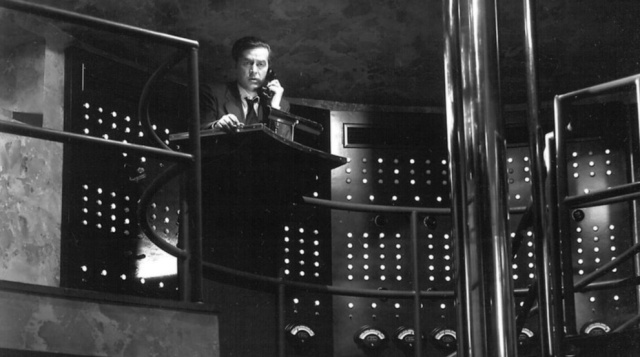 Elsa Lanchester (who was Laughton’s real-life wife of course) is superb as the eccentric painter and George Macready is predictably but still well-chosen to play the ice-cold Hagen. Henry Jones, usually known for his warmth and bluster (as when he played the Captain in MASH on TV), is great as Janoth’s silent henchman and makes for a surprisingly menacing figure. While the film inevitably soften some aspects of the novel it also makes the plot tighter by having Pauline actively seek out Stroud to get back at Janoth, while the Noir atmosphere inside the building is beautifully realised by cinematographer John F. Seitz using wide angle lenses and high contrast lighting to give additional depth.

George: “I thought he was only interested in clocks?”
Pauline: “Maybe I have a clock.”

The crucial sense of time and the build-up of suspense is well caught by the use of extremely long-takes which, outside of Orson Welles, was pretty unusual in thrillers of the time but here works very well indeed to wring as much drama as possible from its ticking clock scenario but making nearly all scenes play out in real-time without cuts.

The adaptation is basically very faithful right up to and including the end, though the climax is made a bit more dynamic, while providing the equivalent of the thud of the book’s closing lines. This is hardly an unknown or forgotten film and may be better-known than the book – both are very impressive examples of titles in their respective fields and you should seek both out if you don’t have them. For a more detailed analysis of the movie, see what Colin has to say about it on his fine blog, Riding the High Country as well as Tim over at Film Noir of the Week and Derek D for MovieShrink. Mark Halliday also has some very cogent things to say about Fearing’s poetry in the Michigan Quarterly Review. For a good overview of Fearing’s career see the impressive range of materials compiled by Cary Nelson at Modern American Poetry; for a slightly more compact look at his work (albeit with some major spoilers), see the entry at the Poetry Foundation (www.poetryfoundation.org/).
The book was loosely adapted into the Kevin Costner spy movie No Way Out, transplanting the setting to the Pentagon with surprisingly good results (I reviewed it here). The most oblique and little-known adaptation remains Police Python 357, a 1976 French film starring Yves Montand, Stefania Sandrelli and Simone Signoret – a review of this adaptation will follow shortly.

DVD Availability: Paramount released this title early on in the days of DVD as part of its Film noir series – the transfer is OK if a little murky. Sadly there are no extras.