THIS SWEET SICKNESS (1960) by Patricia Highsmith

Posted on 27 September 2013 by Cavershamragu 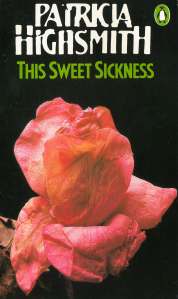 If we’re lucky we’ve all been in love at least once – but can it also be a kind of madness? This is the theme of this novel by Patricia Highsmith, whose unconventional suspense fiction used genre trappings to depict the existential angst of deeply damaged individuals with often queasy-making precision. A study in sexual obsession and deep-rooted insecurity, it also explores her trademark preoccupations with the secret lives of outsiders and the doppelgänger motif.

I submit the following review for Patti Abbott’s celebration of the work of Patricia Highsmith at her fab Pattinase blog; and the 2013 Book to Movie Challenge at the Doing Dewey blog – for review links, click here.

“”Without hesitation he had made the split as it remained to this day: the ugly boarding house in Froudsburg where he worked, and the house in the country where he poured 90 per cent of his earnings and as much time as he could”

From Monday to Friday David Kelsey, chief engineer for a plastics manufacturer, lives in a cheap rooming house even though he is pulling in $25,000 a year (this is 1958). He explains this by saying that he is sending the rest of his income to his ageing mother – but actually she died years ago. Instead he has a secret identity as ‘William Neumeister’ [literally ‘new master’ in German], paying for a tasteful house in a secluded spot an hour’s drive away where at weekends he goes to dream of living with Annabelle, the woman he lost some two years before to an electrician named Gerald. He is determined to win her back, living under the burden of what he terms ‘The Situation’, waiting for the moment to convince Annabelle of the error of her ways. He only has one friend, Wes Carmichael, a recently married colleague who is not very happy at home and so desperate for his company. David however hates hearing about the constant quarrels Wes has with his wife and so is seeing less and less of him. At the boarding house David meets Effie, who is clearly somewhat smitten with him, but he rebuffs nearly all her advances, so dedicated is 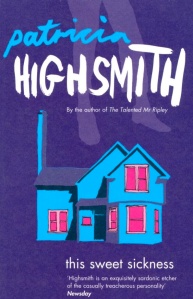 he to getting Annabelle back. He writes passionate letters to her and then starts phoning, deriding her life with Gerald, even after he learns that they just had a baby. He even goes up to  see her, imagining that he is keeping her from him when clearly (to us), she is merely responding to his letters and phone calls out of her kindness. Gerald is furious of course and the two nearly come to blows in a slightly farcical but basically sad confrontation. The pudgy Gerald is not much of a businessman and not as bright as the high-achieving David, but he is the man Annabelle chose and father of their child – the importance of the latter being something that in fact David ignores in his fantasy of what his life with Annabelle could be.

“He knew, like a quiet, still fact that she would one day be his”

David persists in writing and one snowy weekend in January 1959 a car draws up outside his house – Gerald has had a few drinks and has brought a gun, determined to warn David away for the last time. There is an altercation, the gun goes off and Gerald falls on to a step, bashes his head and is killed. As ‘Neumeister’, David takes the body to the police station to report the death, claiming not to know who he was. But how did Gerald know where to find him? It turns out that he had made a scene at the rooming house and Effie 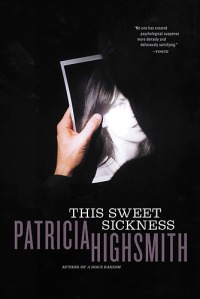 had told him where to go. How could she know? Well, it turns out that she is very, very interested in David and has been checking up on his background, even to the extent of following him to his other house with Wes once she found out that his mother was in fact dead. To make matters worse, Annabelle now wants to meet ‘Neumeister’ to ask what happened to her husband – and still David can’t understand why she is so upset about Gerald (or even remember the sex of their baby). He decides to sell the house and move on, denying that he knew either Gerald or ‘Neumeister’ to Effie, Wes and the police. But slowly, inevitably, his lies become less and less plausible and soon both his lives unravel and he finds himself on the run after another death.

“He had been lying steadily since four o’clock that afternoon, and he had been doing it with surprising ease”

Doubles, secret lives and identity switches are littered throughout Highsmith’s often nightmarish fiction in which strong personalities usually smother the weaker in fascinating power plays recounted in a lucid and unsentimental style. Several critics have complained that the supporting female characters in Highsmith’s works are often not as well-rounded as the (nearly always) male protagonists and that is true to a degree with this book, though in fairness everything is seen exclusively though David’s eyes (even though the story is not actually told in the first person). Effie and Annabelle are seen 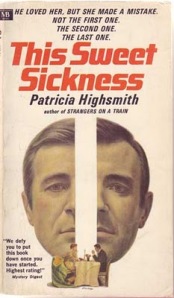 primarily as a function of David’s mental unravelling, which makes the story-telling deliberately limited as he starts to suffer blackouts, having to be reminded of things he did and said. Both the leading female characters tend to be irritating as Highsmith’s intent is not to hide David’s sociopathic tendencies but deep down make us feel his anger that they can’t they see what it is that he really wants.

If the book has a serious flaw beyond this then it is a structural one – having established the main set-up and then using Gerald’s death as a catalyst for the exposure of David’s dual life and for an escalation in his obsession with his dream life with Annabelle, after 150 pages instead of leading to its climax it actually pauses and starts again to go on for another 100 pages, which is ultimately too long. David seems to get away with his deception in terms of the police investigating the death so he sells the house and then buys another one and once again starts to plan his life with Annabelle, who of course is now free to marry in his mind. But she has started seeing someone else and so once again he confronts the new man in his life while Effie visit him for another drunken evening that ends in cruel abuse. This all works very well, but inevitably feels like a variant repetition of what has already gone before. It is not padding but does slow down the momentum somewhat.

” … Mrs Beecham was the only one in the house who counted”

Highsmith dedicated this book to her mother, with whom she had a particularly difficult relationship apparently, but this is a key to understanding the complex fascination that it exerts and what gives this book its peculiar psychological strength despite its longuers. David doesn’t realise it, but it is of course a strong and traditional family unit that he really craves, having been so deprived of it after losing his mother and father early on. This comes through especially well in the scenes with Mrs Beecham, his upstairs neighbour who is an infirm old lady who knits socks for him and which despite himself he appreciates. Towards the end of the story it is she, when he is on the run and everything 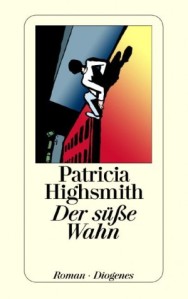 seems to be collapsing around him, that he seeks out for some kind of approval and even some sort of absolution, even though he remains to a large degree unaware of just what it is that he has done wrong. What the book explores, coming as it does at the end of the Eisenhower era, is the extent to which the conservative ideal of the nuclear family is by extension all built on a fiction. Due to the repetitive structure and a somewhat over-extended finale, the book paradoxically seems to slow down as we reach its conclusion even though the plot gets much busier as David dashes all over New York. For the most part though the suspense is well handled and even if the set up never feels that credible, the characterisation always feels scarily plausible.

The novel was filmed twice  – first very shortly after its publication as ‘Annabel’ and was screened on 1 November 1962 as the first episode of the Alfred Hitchcock Hour and then again in 1977 as Dites-lui que je l’aime (Tell Her I Love Her) starring Gérard Depardieu and Miou-Miou. I’ll be reviewing the Hitchcock TV version shortly …

29 Responses to THIS SWEET SICKNESS (1960) by Patricia Highsmith