Posted on 12 March 2013 by Cavershamragu 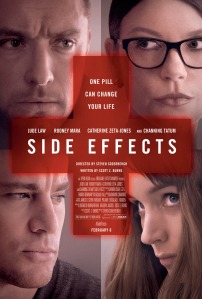 The thriller genre can be so capacious and seductive that filmmakers often use the form to smuggle in less commercial content on its coat-tails. Successful examples of this include the debate on Britain’s antiquated homosexuality laws found in Victim (1961), the polemic on broadcasting ethics and Big Tobacco in The Insider (1999) and a trenchant look at the power of multinationals in developing nations in The Constant Gardner (2005). This past weekend I joined my good friends Nick and Nora (not their real names, but they are a similarly alliterative dog-fancying husband-and-wife team) to see director Steven Soderbergh’s cinema swansong, a drama ostensibly about Big Pharma – but what is it really about?

A modestly budgeted movie with a great cast and crew, it doesn’t seem to have received the attention it might deserve so the following review is offered, a bit cheekily, as part of the Tuesday’s Overlooked Film meme hosted by Todd Mason over at his Sweet Freedom blog.

“One pill can change your life”

While watching Side Effects I found myself ruminating on that fine line that serious filmmakers like Soderbergh have to sometimes tread between making ‘movies’, commercially orientated stories with easily identifiable heroes and villains and with a happy ending usually mandated; and ‘films’, personal projects that can more deeply explore difficult subjects that will only ever appeal to a small film-going constituency. It’s a pretty arbitrary distinction at times as many expensive broad appeal movies flop while a number of personal films can become huge successes – there is no hard and fast rule, much as the Studios might wish it were otherwise to safeguard the bottom line. As the plot of Side Effects unfolded I was reminded of a situation reported circa 1990 when British auteur John Boorman – veteran director of such distinctive works as the existential thriller Point Blank (1967), the dynamic environmental survival story Deliverance (1972), the Arthurian extravaganza Excalibur (1981) and the heartwarming and autobiographical wartime story Hope and Glory (1985) – was hired by Warner Bros. to make a film about medical ethics with thriller elements starring Richard Gere. Ultimately it was felt that the genre element needed to be stronger to make it more commercially viable so the director walked away from the 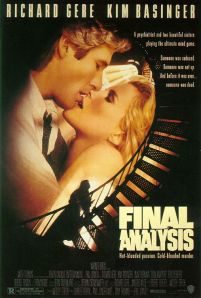 project. What ultimately emerged was Final Analysis (1992), an entertaining Hitchcockian pastiche about a San Francisco psychiatrist who gets too deeply involved with a glamorous patient, played by Kim Basinger, and his role in getting her off a murder charge when her husband is killed. Even with its florid visual touches and lighthouse climax to remind viewers of Vertigo (1958), the barebones of the plot and characters actually have quite a lot in common with Side Effects, which certainly has nods to Hitchcock, Psycho in this case, though stylistically the two couldn’t be further apart as Soderbergh favours a much cooler, more restrained approach. So what’s it about then?

“In some instances death may occur”

Ablixa is a new drug, one that may provide real comfort for those suffering from Depression. Jude Law plays Jonathan Banks, a British doctor living in New York with his American wife and her young son and who is barely managing under a surfeit of work to support his expenses (his wife just got fired and her son is in private school). He seems like a considerate doctor and a good husband and stepfather but is clearly spreading himself a bit thin through overwork – along with his private practice he also works at a hospital and is now involved in clinical trials for the aforementioned new drug. One night at the hospital he treats Emily, who just drove her car straight into a brick wall at top speed without applying the breaks. She has a history of Depression and is struggling to cope as her husband (Channing Tatum), newly released from jail after being convicted for insider trading, tries to re-establish his career. Banks suggests she tries the new drug that he is trialing, but this ultimately leads to tragedy, a killing and a murder trial. Was Banks negligent with Emily (a compelling, multi-layered performance from Rooney Mara, who convinces utterly throughout in her performance as a woman going through mental agony) or is the new drug at fault? When he tries to find out, unknown forces start to mass against him and his life starts to fall apart from. Just how much is at stake in the progress of this new drug? 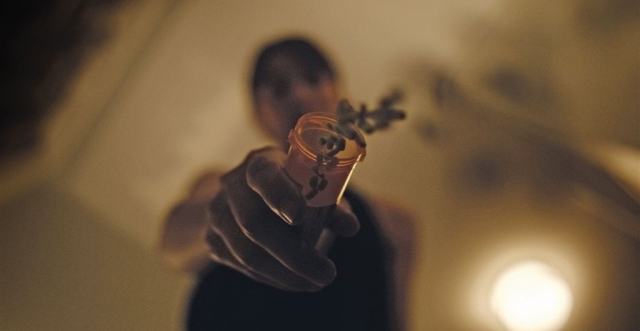 This film will apparently be the swansong for the prolific Steven Soderbergh, who has amassed a considerable body of works over the last twenty years since his 1989 breakthrough with Sex, Lies and Videotape. A cursory look at his credits reveals that, along with assorted shorts and TV projects, he has directed over 25 feature films (including such box office favourites as Erin Brokovich, Traffic, the Ocean’s Eleven series and Magic Mike), on twenty of which he was not only his own cinematographer (under the pseudonym ‘Peter Andrews’) but on many of which he was also the editor as ‘Mary Ann Bernard’. In addition he has worked on another thirty films just as a producer – no wonder when he turned 50 in January this year he announced his retirement! Is this a worthy project to check out on?

On the one hand it is a very successful thriller, one that thanks to a smart screenplay by Scott Z. Burns changes tack very every half-hour or so to keep viewers on their toes and which ultimately ties up all the plot threads very successfully. It does stumble in a few places, most egregiously in a late scene that in fairness can’t be discussed in detail but which resuscitated a very hoary cliché in terms of character motivation when revealing a hidden conspiracy, but it is mostly sharp and flatters the intelligence of most viewers by not needless underlying its twists and turns. But what this does do is ultimately privilege plot over a character – all the actors acquit themselves well here but they do not have much to work with. And this is where the weight of expectations can work against you – ultimately I was hoping that Soderbergh’s last film might be a serious effort engaging with the increasing role that pharmaceutical giants play in our lives. Instead it’s a clever thriller, one with lots of nice reversals, a bright and shiny toy but a mechanical thing none the less and not an organic story with issues and people at stake. And this is a bit of a shame as personally I would have preferred a film that could provide a bit of both. None the less, Side Effects is supremely successful in what it sets out to do, which is no mean feat. Soderbergh can certainly rest on his laurels if he chooses to – but I hope he’ll be back in a few years, cinema needs his talent.

13 Responses to Side Effects