Posted on 4 December 2012 by Cavershamragu

Dirk Bogarde is the troubled scientist at the centre of this suspense drama combining espionage, brainwashing, sensory deprivation chambers and domestic navel gazing that often feels like a rich inverted pudding, light on the bottom and heavy on top. This was the last of a series of issue driven films from the team of director Basil Dearden and producer Michael Relph’ whose previous hot button topics included racism (Sapphire in 1959; All Night Long, 1962), medical ethics and religious freedom (Life for Ruth, 1962), juvenile delinquency (Violent Playground, reviewed here) and the UK’s homosexuality laws (Victim, 1961), often using thriller conventions to make them more palatable for mainstream audiences.

The following review (updated from a previous post) is offered as part of the Tuesday’s Overlooked Film meme hosted by Todd Mason over at his Sweet Freedom blog and you should head over there to see the many other fascinating titles that have been selected.

At a glance here is a chronological list of the cycle of Dearden/Relph films that dealt with ‘important’ themes, with box office star Dirk Bogarde topping and tailing it:

Bogarde in the 1950s was one of Britain’s biggest box office draws but by the following decade, largely in partnership with Joseph Losey and several Continental filmmakers, he was making the transition to more character-based parts, bringing an overall earnestness to his choices, and his performances it has to be said, that leaves one in no doubt of its seriousness of intent though he also continued to appear in less challenging and more commercial fare throughout the decade, in part finishing off his contractual commitments to the Rank organisation.

Bogarde and Mary Ure are a married couple living in Oxford. He is a research scientist contacted by the British Security services – in the shape of John Clements – when an ex-colleague kills himself. He was working on sensory deprivation and brainwashing experiments but there are concerns that he may in fact have been selling secrets to the enemy. In an effort to understand what the man was going through, Bogarde agrees to undergo the experiments himself – the result sees a massive change in his personality, which affects the delicate balance of his relationship with his pregnant wife. Clements is the conventional detective of the story, investigating the background of the dead scientist by looking at his previous research for clues to his conduct and any possible enemy contacts that he may have made. Bogarde becomes the guinea pig in what mutates into a kind of Frankenstein cautionary tale on the perils of going too far with scientific experimentation. Compared with the earlier Dearden and Relph productions, one can discern a greater degree of effort in streamlining this story to fit a more commercial genre template. The intrigue in James Kennaway’s screenplay in the form of a mild spy plot about a possible traitor is mainly subordinated to the sexier topical subject of mental conditioning. While that seems a bit old hat now the film does still offer much fascinating sociological detail with the emphasis on the minutiae of every day life as shot on real locations in Oxford. This tends to be slightly undermined by a determination to seem a bit ‘daring’ by exploiting the era’s burgeoning new frankness in its depiction of sexual matters and language, which admittedly impresses more for the involvement of former matinée idol Dirk Bogarde capitalising on the critical success of Victim. 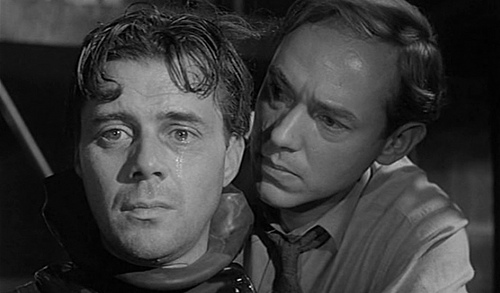 Is the finished film any good though? One has to say that it very quickly it becomes apparent that this is going to be a fairly unsatisfying melange of half-baked elements – the spy plot proves barely relevant while technically the film comes across as somewhat slapdash with several mismatched day/night sequences, as well as several clumsily edited shots. In addition it takes about an hour to decide what sort of film it wants to be. Once it gets past the spy movie opening, it eventually settles for something akin to Ken Russel’s Altered States (1980) in its focus on sensory deprivation chambers as something that can truly alter a person’s personality and ability to feel empathy. Dearden and Relph seem to have been watching a lot of Continental films (a lot of Louis Malle one suspects) but the one obvious concession to that, the music score by George Auric, turns out to be horribly banal and overbearing. The artier narrative strategies, while intriguing, are unfortunately handled incredibly clumsily. For instance, a long introductory documentary, which conveniently sets up the plot, is a horrible example of a faux factual film which, despite being seemingly shot in real-time, has the film edited for shot and reverse shot as if multiple cameras were used, while every necessary plot point is magically recorded on film – in other words it’s a narrated flashback masquerading as a documentary. The final effect of this sequence is fascinating but totally inept and unconvincing, especially when the documentary camera tracks in before something dramatic is actually said. In addition, adding to the somewhat uncertain tone, voice over is briefly introduced at the halfway mark because they can’t find another way to get over some plot data – and then promptly forgotten as a device for the remainder.

On the other hand, the film is often superbly lit by Denys Coop in black and white, making good use of the restrained 1.66:1 aspect ratio mainly associated with the look of European art cinema of the day. There is some notable underwater cinematography which matches well with a generally expressionistic style that suits what will turn out to be a very tall tale indeed – one in fact that feels more like a fairy tale than the topical psychological suspense thriller it ostensibly looks like. It also offers several sterling performances, most notably from Bogarde and his ambivalent friend played by Michael Bryant; Clements is nice and sturdy and dependable as you’d expect, while Ure gets a bit of a raw deal as the wife. She is all intuition and infused knowledge and utterly unreal, not least in the climax which has her giving birth on-screen to her fifth child on a houseboat, with Dirk doing the delivering, another example of the film trying to push the boundaries of what could be depicted onscreen at the time (all very tame today of course). All this just moments after Bogarde’s previously unhinged prof just tried to cheat on his wife for the umpteenth time (this time with a young Wendy Craig). Which is to say that this is not really a role you can play so much as survive … if you are lucky. Ure, always good at either ethereal or put-upon ladies, does as well as can be expected given that the part requiring both attributes. 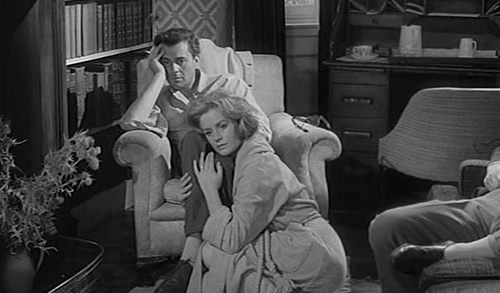 And yet … the topic is in fact a fascinating one, the performance are mostly very effective and several sequences do in fact work very well in isolation (sic). So it is a real shame that it is so deadly earnest all the time – one feels that it might have been better if the filmmakers had watched John Frankenheimer’s delirious original adaptation of Richard Condon’s brainwashing thriller The Manchurian Candidate (1962) rather (perhaps) than the likes of Malle’s beautiful but fundamentally humourless romantic flight of fancy Les Amants (1959) for inspiration, if nothing else to see how you can use a little humour to spatchcock so many disparate elements together and still come up trumps. The po-faced trailer (the face in question belonging to Edgar Lustgarten) tries very hard to see it as a controversial thriller and gives you some idea of the mindset of those making the films. A more entertaining online mashup/tribute to the movie can be found here.

Ultimately The Mind Benders is a very peculiar movie, neither fish nor fowl, but not a failure despite its conflicting intentions either – it is a film that is well worth catching up with and is well out of the norm. In many ways it might also make for rather a good double bill with Dearden’s last movie, the ambiguous story of the paranormal, The Man Who Haunted Himself (1970), also about an outwardly ‘normal’ man whose life starts to fall apart when he suddenly starts behaving strangely following medical intervention. Both are available on very decently transferred DVDs.