Posted on 1 October 2012 by Cavershamragu

An engaging if curious genre hybrid, this is a patchwork movie combining Cold War espionage, a murder mystery and two love triangles in a science fiction setting – and all on the tightest of budgets. Unpretentious and fun, this British B-movie features imported stars Howard Duff and Eva Bartok under the smooth direction of Terence Fisher, Hammer Films’ emerging resident auteur. Like so many of the company’s early films, it was based on a BBC radio play. Originally broadcast on 30 January 1952, Charles Eric Maine (aka David McIlwain) would later turn his play the into the novel of the same title. Although set slightly in the future, like much of the author’s work this is really just a thriller with an exotic setting.

“They’re up there in space, circling the Earth. They’ll stay there for decades if the calculations are correct. Your calculations, Mitchell. The perfect murder.”

Duff plays Stephen Mitchell, and American engineer on long-term loan to the British to develop their outer space rocket programme. Right away what strikes you today, as with the 1967 Bond movie You Only Live Twice, is that there is something rather twee and charming about the idea that it’s the Brits leading the space race albeit with US help, as if the sun had not yet set on the Empire. Of course it was really just a ruse to make the film marketable for overseas sales, a standard company practice after Hammer made a deal with Hollywood producer Robert L. Lippert to supply US-friendly stars and scripts in return for UK distribution of his films and Stateside distribution of theirs.

Mitchell is leading a group of international scientists on a top secret project to develop an orbiting space station for the British Military. His team consists of mathematician Dr. Lisa Frank (second-billed Eva Bartok, later used to much better effect in Mario Bava’s classic giallo, Blood and Black Lace); biologist Dr. Philip Crenshaw (Andrew Osborn), a smoothie who is having his wicked way with Mitchell’s bored wife (Cecile Chevreau); and keen-as-mustard chemical engineer Dr. Toby Andrews (a charming performance by the young Michael Medwin, later a noted character actor and film producer), who is carrying a bit of torch for Lisa though unfortunately for him she only has eyes for Mitchell. Overseeing this maelstrom of emotion in a secluded secret base with a benevolent paternal eye is roly-poly Professor Koepler (Philip Leaver).

The scientific team, including Mitchell’s increasingly brittle and frustrated wife, is sequestered on to the premises of the Deanfield research facility – and it is easy to see why she is so desperate to leave as the surroundings are little better than army barracks with research likely to stretch ahead for several more years. As a civilian she has nothing to do while her every move is matched by the guards. Her affair with Crenshaw thus seems as much a rebellion against the claustrophobic confines of the facility as her husband. The basic premise predates Nigel Kneale’s first Quatermass serial, which Hammer would bring to stirring cinematic life a couple of years later, and like that film begins with a movie within a movie. After a shot of a rocket firing into space and the main titles we follow a truck with Mitchell and his team as it scours the countryside. After successfully recovering the film of the latest launch after it has landed back on earth, they return it back to the base (which to me incidentally looks a lot like the Rank Film Labs, later Deluxe, in Denham). This is then screened as a precursor to the next rocket launch, which is planned to impress the military. As yet only animals have been sent into space but a manned flight seems imminent. The relationship with the military is presented in a fairly cozy way as they insist that domination of space will only be for peaceful ends, unless of course the enemy makes a move … Not exactly reassuring, but this was the height of the Cold War, with the ‘police action’ in North Korea still ongoing and Stalin still alive. 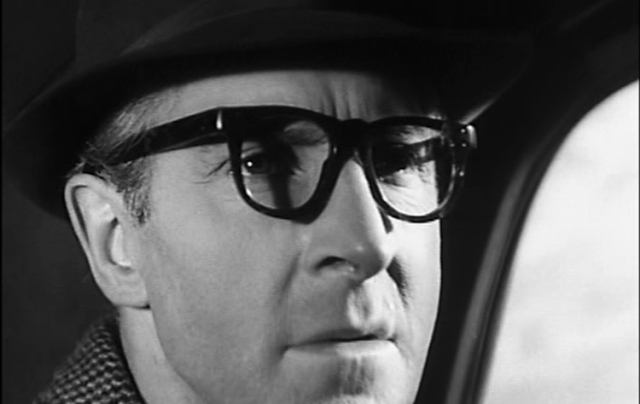 That evening Mitchell sees Crenshaw and his wife in a clinch but doesn’t interrupt. Mitchell argues with her when they prepare for bed later that night but won’t get into specifics. In the meantime Crenshaw goes back to the labs and is spotted by Toby, who is the first to suspect that he is up to no good when he lies about the reason for being there. The next day the rocket launch encounters an unexpected problem and fails to reach its designated orbit, instead stopping short by a considerable distance. This unexplained problem coincides with a seeming impossibility – the disappearance of Mrs Mitchell and Henshaw from the base. Given the ultra-tight security, how could they have left without being spotted – if indeed they did … To solve the mystery comes Dr Smith, ostensibly a biologist to replace Henshaw, but really from Military Intelligence (that well-known oxymoron). As played with relish by Peter Cushing look-alike Alan Wheatley, who would have great success playing the Sheriff of Nottingham in the popular 50s version of Robin Hood opposite Richard Greene, the bespectacled, snuff-inhaling detective is probably the liveliest character in the film.

“Hunches may be unscientific but sometimes they pay off.”

Smith questions the various members of the team and quickly develops a particularly nasty theory, one that seems to fit all the facts however: Mitchell, knowing about his wife and Henshaw, killed them both then dumped their bodies in the rocket’s fuel tank having partially emptied it first to make room for them, explaining the unsuccessful launch that day. Mitchell is outraged and suggests that they allow him to fly up there in the next launch and bring back the stranded ship.

This was the second of a pair of early science fiction films that Fisher made for the company at their Bray Studios in 1952 (the other was Four Sided Triangle) and as such they are the first indication really of his later prominence at Hammer handling more fantastical subject matter. Having said that, and contrary to the impression given in most of the contemporary advertising, the science fiction element is really quite minimal, the manned rocket launch saved to climax in the last 10 minutes of the movie. The rest is much closer to typical Hammer output of the time, a thriller involving stolen secrets very much in the (then) here and now with a shootout, an explosion, lost of derring-do and a car chase at the finale. But given the cramped limitations of the small studio facilities at the time, it is a wonder that they even attempted this kind of film (which was intended in fact to cash-in on the success of their distribution of an earlier Lippert production, Rocketship X-M). 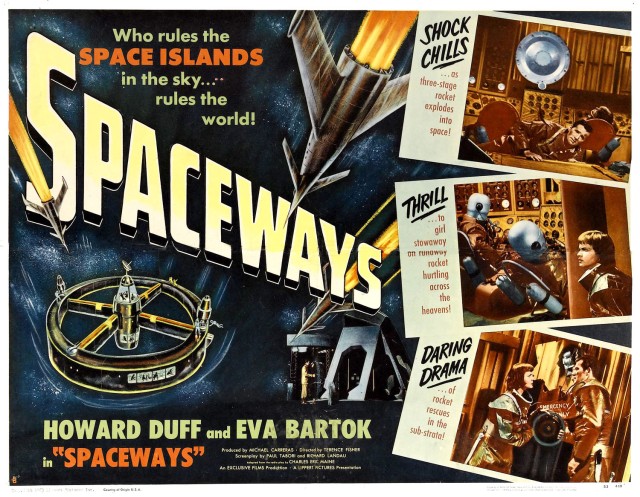 The film builds towards a fairly complex and extended finale as Smith rushes around outside the facility to find out who may have been stealing military secrets from the base and Mitchell prepares to shoot into space, ostensibly to clear his name but also to repair the rocket programme after the failure of the previous launch. This decision sparks Lisa into action who, in an involuntarily funny scene, turns Mitchell on by spouting miles of scientific computations in an effort to reassure him that the rocket failure was due to a computational error and not to fuel being deliberately siphoned off to dump the two bodies. She plays on Toby’s affections for her and gets him to insist that he fly with Mitchell and then swaps places with him. This certainly does suggest that security is a little lax at the base – as the couple hurtle off into space, there are about 10 minutes left to find out what caused the previous launch to fail, what happened to Crenshaw and Mitchell’s wife, and maybe even provide a happy ending for our two scientists. That this all gets more or less sorted out satisfactorily and dramatically in such a brief time is certainly a testament to the exquisite concision of the B-movie approach to storytelling.

DVD Availability: This title was originally released in the UK by DD Home Entertainment, which after going into administration is now known as Simply Media. Copies are still available from them and provide the film in a decent print with a handsome booklet written by Hammer experts Jonathan Rigby and Marcus Hearn. The US edition from Image, without the notes, also still seems to be available.