Posted on 18 September 2012 by Cavershamragu

Paul Henreid stars in this fast-paced British whodunit, an adaptation of Adam Hall’s Queen in Danger, my review of which you can read here. In the US the film was released as Man in Hiding and was one of dozens of modest black and white thrillers made by Hammer Films usually featuring imported Hollywood lead actors. Mantrap, like the cream of the company’s better-known horror output, shared the same director in Terence Fisher, who unusually is also co-author of the screenplay (with Paul Tabori). Henreid, a refugee from the communist witch hunts in Hollywood, may have been the headline star though the limelight shines brightest on its two emerging newcomers, Lois Maxwell and the delicious Kay Kendall.

“Tomorrow after the second show we will have a party. You must come. It will be so gay, so non-austerity”

Mantrap was designed to play on the second half of a double bill and was made for Hollywood producer Alexander Paal and set in a London still in the grips of rationing and the slow rebuilding programme following the Nazi bombing raids. This is juxtaposed with its setting in the world of high fashion, serving up a fascinating contrast between the gloss of haute couture and the down-to-earth neurosis of Film Noir. Indeed, this is a film that works best by creating a series of contrasts which alternate with increasing speed as it works towards a high-speed climax in the ruins next to St Paul’s Cathedral. Which is to say that the cost vs value dynamic, a source of much sober reflection after the war and its subsequent privations, is sharply brought centre-stage.

The action begins immediately beneath the main titles (well, at 75 minutes there really was no time to waste) as convicted murderer Speight (Irish actor Kieron Moore) goes on the run and makes his way to London, apparently to make contact with his wife Thelma (Canadian actress Lois Maxwell). Years earlier Speight was convicted of the murder of an apparent stranger, lower class good-time girl Joanna Martin. As there was no apparent motive, and seeing as Speight suffering from amnesia after being found knocked out at the scene of the crime, he was sent to a mental asylum rather than jail. His escape coincides with his discovery that Thelma is now passing herself as the wife of engineer Victor Tasman (Bill Travers in an early role, and a fairly thankless one it has to be said) and has even taken his name. Hugo Bishop is contacted by an old friend of Speight’s who is convinced that despite appearances the man is innocent of the crime he was convicted of. Thelma however has no such doubts and is utterly terrified, yet refuses to leave her home despite the offer by her kindly boss (played by Hugh Sinclair, who a decade earlier took over from George Sanders to play The Saint on screen) to stay with his wife and children out of harm’s way in the country.

Henreid is perfectly affable as Bishop despite being completely different from the character in the original book. No longer an eccentric amateur sleuth with a private income, Henreid plays a humanist lawyer who used to be in intelligence during the war and who takes on the case because he owes a favour to an old friend. Equally changed is his secretary (and now fiancée) Vera Gorringe, originally a middle-aged lady with a strong maternal instinct towards the often irritating Bishop but who is played by Kay Kendall, then in her mid twenties. Either way, Kendall steals every scene she is in, seemingly without even trying, just through the sheer force of her eccentric personality and kittenish good looks. Apart from these changes the script deviates very little in terms of plot and uses the bulk of the dialogue too, though it does add a new character in terms of Speight’s friend and also throws in a climactic car chase and an extra murder, though this is a red herring and is left dangling at the end though it does help make one briefly question Speight’s guilt, which is not otherwise really debated all that much. 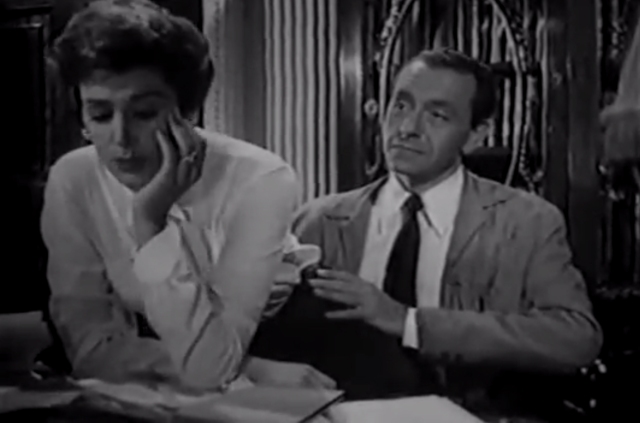 Maxwell certainly looks the part of a stylish fashion writer and has the requisite no-nonsense strength of character (albeit bordering on stubbornness). She is less good on the more conventional panic and mild hysteria in some scenes however, often seeming a bit mechanical, to the extent that one can almost sense Fisher coaxing the moves and expressions out of her. On the other hand she is very convincing in the crucial scene in which she gets terrified in her own home and starts shooting blindly. This is handled very well by Fisher with a series of discreet but effective alternating forward and reverse tracking shots to emphasise her mounting fear. Equally good is Fisher’s handling of an early scene where Bishop stakes out the bombed out crater near St Paul’s where Joanna Martin was killed, assuming Speight would revisit the scene of the crime – which he duly does. This is one of the best, and most extended, scenes in the film, closely modeled on the book, in which Bishop comes to believe that Speight is innocent. It is also the scene which gives the film its title, when Speight describes the asylum he broke out of. It is very effectively staged with the two men speaking on a split level of the ruins of a house, ending with Speight showing Bishop a drawing he has made of the man he now remembers knocked him unconscious. He has no idea who he is but is certain that he was the one who killed Joanna. Can Bishop help him find the man and prove his innocence? And can he stop Thelma cracking up from the strain?

With hindsight one of the most fascinating aspects of these Hammer films is the way that,  as well as importing actors, they co-opted themes, styles, plots and motifs to create a distinctive hybrid formula that, while necessarily derivative, proved commercially highly successful and very durable too. Its origins can be traced to the deal Hammer struck in 1951 with Hollywood producer Robert L. Lippert. It would run for the next five years, turned the company around commercially and characterised the nature of its output for the next two decades. Postwar British cinema was, like the country at large, still in recovery and still in the doldrums. Hammer decided that to compete internationally it would have to cater to the American market. This was controversial at times as Hammer was often accused of ignoring the domestic market though benefiting the various tax incentives put in place to bolster the British industry. None the less they proceeded with great success, becoming one of the UK’s most industrious film companies, cranking out tightly budgeted features at a prodigious rate before moving on to more expansive and expensive projects. It is worth remembering that these early film, mostly thrillers and melodramas, were made for about 10% of the cost of a main feature in Britain at the time. 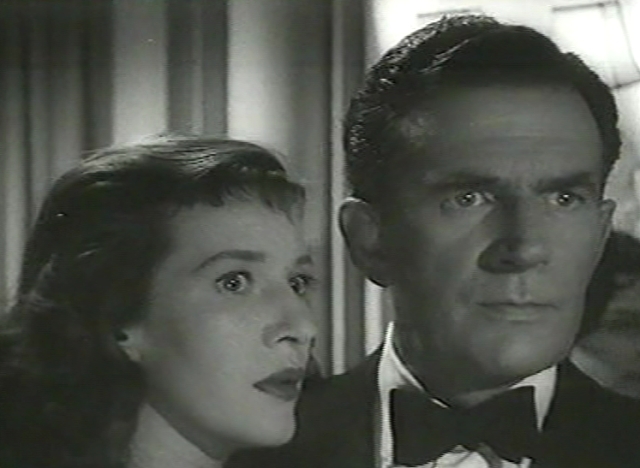 These films helped establish the studio and the production team that would largely be responsible for its greater successes later on but are also fascinating transitional works, adopting the American Noir sensibility to convey the unsettled nature of postwar Britain. The Nazi may not have invaded but the Americans to a certain extent did and these films tread carefully on that demarcating line, marking out a transatlantic cinematic border. The result is that the Hammer films throughout the 50s and 60s often have an international, or anyway transatlantic flavour.

Filmed at Hammer’s Bray Studios in June and July 1952, this was made by the comany’s usual in-house technical crew but also reunited Fisher with Kendall, from the previous year’s adaptation of another Elston Trevor novel, Wings of Danger (to be reviewed here shortly) and with Henreid after Stolen Face. By comparison with the latter (which I previously reviewed here), Mantrap is certainly a more modest offering, a more linear and straightforward genre product, though it too slickly marries together a number of different elements. In this case we have an apparent madman on the loose, a woman terrified that she is about to be murdered, the world of high fashion in an austerity Britain where even St Paul’s Cathedral sits next to bombed out buildings several years after the end of the war – and of course a whodunit plot.

The bomb site near St Paul’s because the focal point of the film, with all plot strands leading back there to the originating incident – the murder of Joanna Martin. The location is handled extremely well by Fisher, both for the two meetings with Speight (the first nicely staged on a split level so that Bishop has to look up to Speight, the second, when Bishop has earned the man’s trust, on a level plain), the second including something not in the book – a brief flashback to the crime. Weirdly, on the print used for the TV broadcast that I have, the face of the murderer is briefly visible though clearly this was not the intent – one assumes that this would have been slightly cropped for projection in cinemas when eliminating keystoning (cutting off the rounded edges at the corners to create a rectangular images) and perhaps with a slightly darker image. The script also adds a chase and a new finale to the story, which returns us to the St Pauls location, bringing the story full circle as Bishop reminds us of the cliché of the criminal revisiting the scene of the crime. All in all this a well-paced, nicely made mystery that definitely deserves extra credit for the symbolic use of St Paul’s and for its fascinating depiction of postwar Britain. 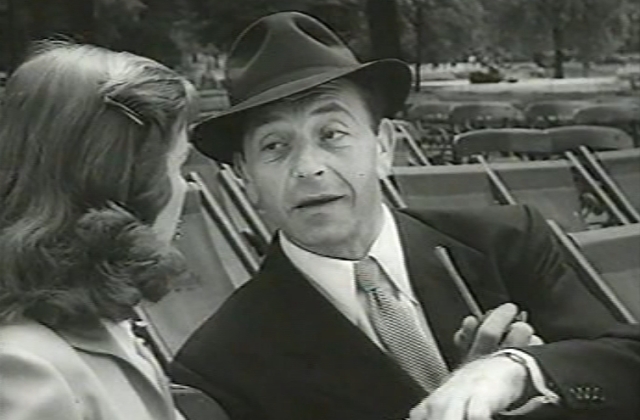 Along with its unusually strong cast – even the bit players include such recognisable thesps as Conrad Phillips and Barbara Shelley (billed as Barbara Kowin) – and vivid suspense sequences such as Thelma’s near breakdown in the beauty parlour (taken straight from the book), this is also a film with a dry sense of humour, such as bizarre sequence in which Henreid and Kendall discuss the plot while they sit by the fireplace and clean his shotgun. It is high time this film was made commercially available on video.

DVD Availability: The film is not currently available commercially on home video. It was last shown on British television decades ago (hence the rather unimpressive screen grabs I have used here).