That Woman Opposite (1957) – Tuesday’s Forgotten Film

Posted on 4 September 2012 by Cavershamragu

Phyllis Kirk stars as the eponymous young woman in peril in this unpretentious British whodunnit (released in the US as City After Midnight). Eve Atwood is a wealthy American divorcée living in the small town of La Bandalette in France. She is still nursing the wounds from her separation from Ned, her rake of an ex-husband. The quiet town has recently been disrupted by a series of robberies and right from the beginning we know that Ned is part of the gang responsible. One night the getaway car is late and Ned gets into a fight with a gendarme, who later dies from his wounds. As Ned escapes, he sees Sir Maurice Lawes looking at him from a nearby house. Once over the Channel, Ned learns that his ex-wife is due to marry Toby, old man Lawes’ son and heir. He recklessly decides to head back, arrogantly believing that he can win his ex-wife back.

Eve has naturally gravitated towards other expatriates in the area and has made friends with the Lawes family, who live in the villa directly opposite from hers. Old Mr Lawes (Wilfred Hyde White) is now retired and is an avid collector of antiques, much to his sour-faced wife’s incomprehension. Eve clearly enjoys the company of Janice (played by the lovely Petula Clark, in her last film role before her singing career took off) though it is slightly hard to understand why she is engaged to her stuffed shirt of a brother Toby, except maybe that she is on the rebound. This is clearly something that also puzzles insurance investigator Dermot Kinross (a rare role as the hero for the charming Dan O’Herlihy), who has been sent to check on some of the recent robberies (and who amusingly refers to Toby as a ‘chemise farce’). He thus interviews both Sir Maurice and Eve as both have insurance cover with his company. Kinross is immediately smitten with Eve, though he won’t admit it right away. That evening he pretends to bump into them at a restaurant and immediately makes the rather callow Toby (Jack Watling) jealous. Eve senses the tension and so announces that she and Toby will marry in two weeks time. This troubles Sir Maurice as he has heard some disturbing news about Eve’s earlier marriage to Ned and is worried that this will have a negative impact on his sons’ career prospects at the bank.

His fears seem borne out when, later that night, Ned (played with his usual oily charm by William Franklyn) uses his old key to the house to enter into Eve’s bedroom, threatening to create a scandal if she doesn’t take him back. Just as Ned seems to be getting quite violent, the scene is interrupted by Toby, who phones even though it is 2AM. Ned capriciously makes to open the curtain to Eve bedroom window, to scadalise the ultra-conservative Toby. But across the way he sees not her suitor but the dead body of Sir Maurice – and a pair of gloved hands turning out the lights. Eve panics and desperately pushed Ned out of her room, making him accidentally tumble down the stairs. He seems only to have a bloody nose, but they are seen exiting the back door by the maid Marie, who locks her mistress out of the house to create mischief.

The timing couldn’t be worse for Eve – her nightie has blood on it and she quickly becomes a suspect in Sir Maurice’s death while trying to hide Ned’s presence. Janice quickly turns on her friend and Toby too starts to doubt his fiancée. When the police come to Eve’s house, she dashes out after receiving an invitation to a small shop. There she discovers that Toby has been more than a little hypocritical and may have been involved in blackmail and the theft of a previous necklace taken from Sir Maurice’s collection on the night of the murder. Eve is saved by Dermot, who spends the night talking to her and discovers the secret to whodunit just by listening to her account of the events, although she herself is unaware of the importance of what her tale contains. Phyllis Kirk, probably best-remembered for playing Nora Charles opposite Peter Lawford in the 50s TV version of The Thin Man, makes for an appealing heroine (especially her scenes with her splendid cad of an ex-husband), though admittedly she isn’t quite as neurotic as her equivalent in the original book, while O’Herlihy has charm to spare as the knight in shining armour. Jack Watling is perfect as her foolish fiance while Petula Clark is saddled with a rather dreary role which also compares poorly with the more abrasive and interesting character as created by Carr.

Writer and director Compton Bennett brings an agreeably lightness of touch to the proceedings and provides a remarkably faithful adaptation of The Emperor’s Snuffbox by John Dickson Carr, which just the other day I reviewed here. The book is sensibly streamlined, reducing the number of sets and the cast list (the unnecessary Uncle Ben is the main excision) while Kinross’ role is made stronger by turning him from a mere friend of the French police inspector to the insurance investigator. All the major clues and set-pieces from the novel are retained, as are chunks of the dialogue, including the atmospheric ‘interrogation by lighthouse’ scene, its beam periodically blinding Eve during a grilling at the hands of the police – nice variation on just sticking a desk lamp into a suspect’s face anyway! This all makes for a highly entertaining low-budget mystery, well above average for the small company Monarch that produced it. 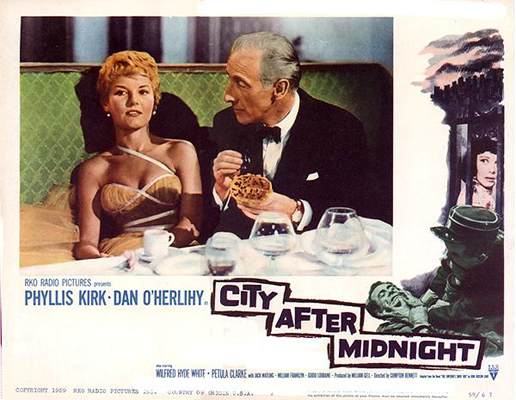 DVD Availability: Available on a perfectly decent frills-free DVD with a 4:3 transfer from Odeon Entertainment in the UK. Special thanks to Colin of the ever-wonderful Riding the High Country for the loan of his copy of the film.

21 Responses to That Woman Opposite (1957) – Tuesday’s Forgotten Film