MURDER ON THE BLACKBOARD (1932) by Stuart Palmer

Posted on 17 August 2012 by Cavershamragu 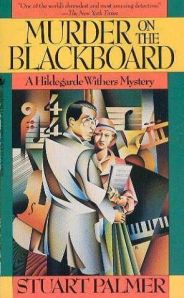 This book features one of the first, and funniest, examples of that mystery mainstay, the spinster sleuth. From Mary Roberts Rinehart’s plucky one-off heroines to the more professional investigating of Agatha Christie’s Jane Marple and Patricia Wentworth’s Maud Silver (both first appeared in 1928), this is a subgenre with lots of Golden Age appeal. Nosy schoolmarm Hildegarde Martha Withers is my favourite though. She and Oscar Piper, her Inspector friend/nemesis in the New York Police Department (they were even engaged once for about half an hour) made their jolly debut in The Penguin Pool Murder (1931).  I opted not to review that one as plenty of others have got there before me, planned on doing the follow-up, Murder on Wheels (1932), but darn it if the indefatigable John Norris didn’t get their first (again!) at Pretty Sinister Books, so I’ve plumped for the third …

The following review is offered as part of Kerrie’s 2012 Alphabet of Crime community meme over at her Mysteries in Paradise blog, which has reached the letter M. It is also eligible under the guidelines of Bev’s 2012 Mystery Readers Challenge, specifically the 8 books I have pledged to read with an educational setting. I also offer it as part of the Friday’s Forgotten Books meme run by Patti Abbott at her Pattinase blog.

“A Copse doesn’t get up and wander about, as a rule.”

The novel begins on 15 November 1932 at 15:55 (Palmer provides exact date and time at the top of each chapter, except the last …). Jefferson Grammar School is nearly empty but  Hildegarde is keeping back one of her naughtiest pupils after class. She hears the comely new music teacher head off to the cloakroom and never return. Curiosity gets the better of her and the intrepid lady finds the dead body of her young colleague. Realising that the murderer must still be in the building as there is no other way out other than through the front doors, she goes to the candy store across the street to keep an eye on the exit and calls Oscar. When he arrives they both head in, armed only with her cotton umbrella, to find that the body has now gone. While exploring the basement, Oscar is smashed on the head and taken to hospital with severe concussion, while later the hatchet-faced Hildy is also menaced by, well, a hatchet …

Piper is thus absent for much of the novel after he is hospitalised, though this leads to a great scene in which an emotional Hildy is given his badge so that she can continue the investigation without him after the body of the woman is found in the furnace, burned beyond recognition; and the introduction of Viennese criminal psychoanalyst Professor Augustine Pfaffle, who briefly gets put in charge of the investigation and makes a complete hash of it, with the inebriated janitor getting arrested early on. Hildy however is sure he is innocent (pretty much just on grounds of social status):

“You must have read enough mystery novels to know that the janitor and the butler never commit a murder. It’s always the nice man who seemed so disinterested and helpful all through the progress of the story.”

So who did it? One of the teachers, the principal, his dotty wife, his secretary (who was the dead girl’s roommate), or the janitor after all? An empty school is a great environment in terms of atmosphere and Palmer makes good use of it here as we spend lots of time exploring the various rooms of the multi-storey building. Along the way Hildy picks up a dizzying mixture of clues including bootleg liquor (Prohibition was still in effect, though not for much longer), a dead ant, a collection of ladies’ shoes, a musical notation on the eponymous blackboard, a winning Irish sweepstake ticket, a burned ring, another missing schoolteacher, a secret room in the basement and much more … Eventually she figures it out and sets a trap for the killer, using Oscar as bait.

“I’m not thinking, yet,” the sergeant announced.
“Let me know when you start”, Miss Withers said softly.

I am often drawn to the nexus between movies and literature in the mystery genre and Stuart Palmer excelled as both the author of a series of humorous mystery novels and the stories and screenplays for over a dozen movies, including exciting adventures for Bulldog Drummond, The Lone Wolf and even some featuring George Sanders and his brother Tom Conway as The Falcon. His introduction to the movies came when the first three of the dozen novels featuring the hatchet-faced school teacher Hildegarde Withers were filmed by RKO with Edna May Oliver wonderfully cast in the role. The studio then made three more, but had Helen Broderick and Zasu Pitts take over the part, with considerably less success though James Gleason was retained throughout as Oscar Piper. The full list of movies (and one later TV pilot starring Eve Arden) is as follows:

Bill Lengeman over at his blog Traditional Mysteries has written some affectionate posts on these films.

One of the (many) pairings I could have included in my Partners in Crime listing from last year would have been for the collaboration between Palmer and Craig Rice, which saw what Anthony Boucher thought was one of the first joint literary conjoining of two sleuths when upright teetotaler Hildegarde Withers and the rarely sober lawyer JJ Malone appeared in several short stories together (eventually collected in 1963 in the book, The People Vs. Withers and Malone). Here is a complete list of the Withers books, including Hildegarde Withers: Uncollected Riddles, the posthumously published collection of short stories from Crippen & Landru that includes the two short stories adapted into the Withers movies starring Zasu Pitts.

Like all the Withers books, Murder on the Blackboard is well plotted and has bags of humour (at one point Hildy even has to slide down a fore escape pole), especially the character names. Along with Pfaffle, two of the more incompetent detectives are named Burns and Allen, the school principal is named Waldo Emerson Macfarland while his wife Chrystal prefers to be known as ‘Madame Chrysanthemum’!

For more information about Palmer and his amazing life an books, see Steven Saylor’s website, www.stevensaylor.com. Red Morgue Press specialises in reprinting crime novels that deserve to be better known and Murder on the Blackboard is available from their website: www.ruemorguepress.com.

Great fun and well worth seeking out

22 Responses to MURDER ON THE BLACKBOARD (1932) by Stuart Palmer