The Edgar Wallace Mysteries were a series of roughly four dozen hour-long B-movies made to sit on the lower birth of a cinema double bill, originally released in Britain at a rate of roughly one-a-month between 1960 and 1965. For a complete list of the films, with links to my reviews to be added as I go along, visit my dedicated page here. The first of the series was Clue of the Twisted Candle, it’s a locked room mystery and stars Bernard Lee.

The following review is offered for Todd Mason’s Tuesday’s Overlooked Film meme over at his Sweet Freedom blog, where you will find many other gems.

The Series: For a complete of the films in the series, with links to my reviews to be added as I go along, visit my dedicated page here.

The Book: First published in 1916, the book’s protagonists are Scotland Yard Assistant Commissioner T. X. Meredith and his old friend, mystery author John Lexman. They are  investigating the activities of Remington Kara, a Greek (or is it Albanian?) tycoon with a shady past who now lives in fear of his life and has turned his bedroom into a virtual fortress with impregnable walls and only one door, which can only be opened with a latch on the inside. He is found dead inside, with only a burned candle as a clue. There is also a mysterious one-armed man, an heiress in disguise, a dog gets killed, and the usual Wallace accoutrements in terms of hissable villainy, secret passageways and a murderer who is fairly easy to spot. This book is also very easy to find and has been published online in various places, such as here.

The Film: In updating Wallace’s book, which is spread out over a fairly lengthy period, Philip Mackie collapses the narrative to suit the requirements of low-budget filmmaking and a one-hour running time though keeps the basic structure intact. The villain, played with bushy delight by Francis De Wolff, is now named Ramon Karadis but remains a shady character who lives in fear of his life and asks for a direct line to Scotland Yard so that if anyone tries to kill him he will be able to call them direct, which seems like a great bit of personalised service and very nice of the Yard.

Bernard Lee plays Meredith, who is assigned to the case, apparently because he has a keen understanding of the social register as he is forever being asked by his superiors if he has heard of this or that person – it’s an amusing appeal to the nobility, trying to give the film a patina of gloss and upper crust grandeur that it can’t really display on this kind of budget but which is often seen as being part and parcel of the traditional whodunit. In this respect this feels a lot more like a conventional murder mystery than many of the thrillers that would follow in the series. Meredith knows that Karadis is a bit of a dodgy character but can’t prove anything, so after being shown round the man’s seemingly impregnable study (rather than the bedroom in the book), the phone line is installed. We are now introduced to two new characters which will drive the plot along.

Karadis has a cryptic meeting with Viney, a seedy chap (played by the wonderful Richard Vernon, unusually playing a lower class character) with whom he is involved in some of criminal enterprise. He gives him an address and asks him to take a letter and an unloaded gun to an appointment there, to be driven by his chauffeur, later that night. The man he is to meet turns out to be John Lexman (played by David Knight), who has been changed quite considerably from the character in the book. He is a friend of Karadis’ (though not of his girlfriend, who is clearly unhappy at his arrival) and meets him at his home in the afternoon. Lexman has received a blackmail note and Karadis gives him a gun for protection and burns the letter. That night Viney goes to meet Lexman – we never see what happens, but while the chauffeur waits a shot rings out. Enter Scotland Yard … 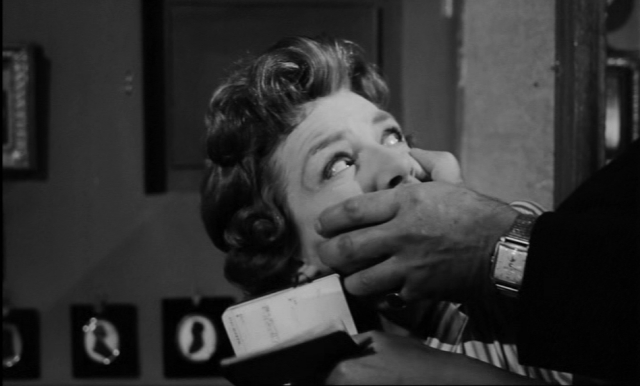 Lexman tells Meredith that Viney had come to blackmail him and pulled a gun on him, so he had no choice but to defend himself. Lexman claims the gun had a hair-trigger and he didn’t really mean to shoot, but now the pistol has gone missing. Back at the Yard, Karadis claims to have no knowledge of the blackmail letter and the gun, leading to Lexman’s arrest. We now realise that this was the plan all along, to frame him for Viney’s murder, though this a pretty feeble plan – even with a hair-trigger, he might not have killed the man after all and the chauffeur driven car is a clear link back to Karadis. None the less, Lexman ends up in jail. Meredith knows that he must be innocent and sets out to prove it. In a plot development that ends up actually quite similar to that of the Hitchcock movie Frenzy  (based on a novel by Arthur LaBern who also wrote some of the Wallace films interestingly enough), Lexman breaks out of jail and tries to get his revenge while Meredith tries to track him down and prove the he is innocent. It is only at this point that we actually get to the locked room mystery … 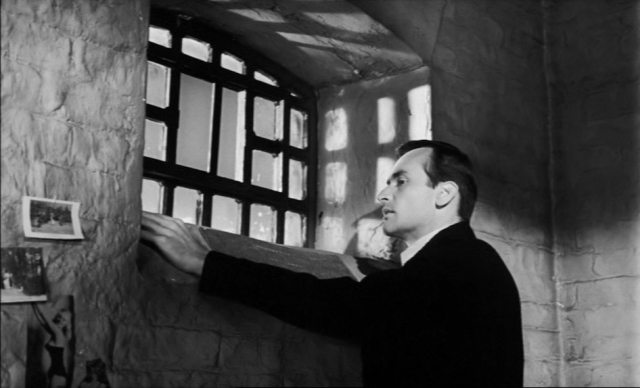 While Lexman is on the run, Karadis is visited by his blustery and unpleasant associate Dr Griswold, who takes a special interest in the man’s new butler, who we know is an old lag. In fact he briefly shared a prison cell with Lexman, who finally turns himself in to the police – while talking with Meredith, who tells him that he thinks he can prove now that he didn’t kill Viney after finding the gun that went missing, the direct phone line from Karadis rings – they head there and find the room bolted on the inside. One oxyacetyline blowtorch later, and Karadis is found murdered inside, with only a couple of candles out-of-place. The man clearly had the time to ring Scotland Yard on his special phone, but was then murdered and his killer apparently vanished into thin air … 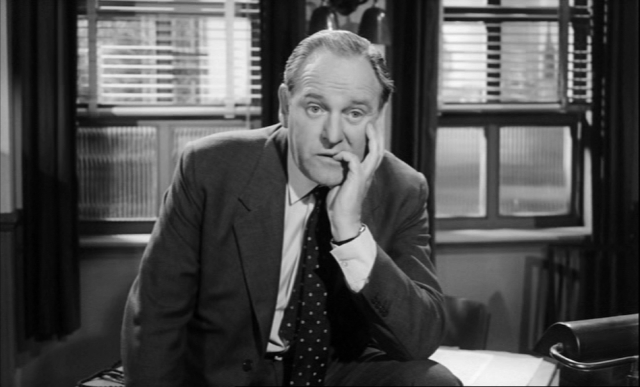 The locked room mystery probably won’t tax hardened fans of the genre but is certainly ingenious and pretty simple to understand for once, not involving complex and unlikely mechanics and the case is solved fairly quickly by Meredith who makes for an appealing hero, played with perhaps rather more animation that we are used to by Lee, occasionally prone to flights of brash enthusiasm as he races around trying to clear Lexman’s name and nail Karadis. He scenes with his sergeant (Stanley Morgan) are great fun, and it is no surprise that the duo re-appeared a few more times together playing variations on the roles later in the series. The British Film Institute’s journal or record, the Monthly Film Bulletin, welcomed the beginning of this series of films, remaking that it, “…augurs well for the stories to come … curiosity is aroused and resourcefully maintained”, and for once I think they got it right. This efficient little movie, an hour in length, is plenty of fun, has a complex plot and plenty of intriguing characters. Great way to while away a quiet afternoon, especially in the excellent new edition on DVD.

The DVD: Network are releasing all of the Edgar Wallace Mysteries produced by Anglo Amalgamated on DVD across seven box sets, with an omnibus 21-disc box set also scheduled. Extras include liner notes by Kim Newman, stills galleries and another 7 films loosely related to, but not actually part of, the series. Volume 1 includes Clue of the Twisted Candle, and as a bonus Vernon Sewell’s Urge to Kill and John Kruse’s brooding mini-masterpiece, October Moth.