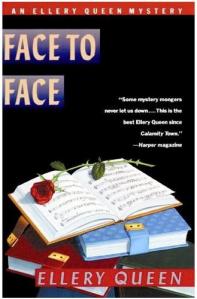 Did you know that at the end of his illustrious career Ellery Queen retired to Italy, got married and sired a son? And that ‘Queen’ was not his real name, even in the fictional sense? Well, this is the information provided by JJ McCue in his foreword to the first ‘Queen’ novel, The Roman Hat Mystery (1929). I was reminded of all this while reading Face to Face, written some 40 years later. One of the last books in the series, it sees the unexpected return of JJ, a character too clearly in the Van Dine vein (sic) so dropped after Halfway House in 1936. In addition, the book also features references to the Roman Theater and takes its title from Queen’s trademark, a dying clue. Which is to say that Face to Face can have valedictory feel to it …

The 2012 Alphabet of Crime community meme over at Kerrie’s Mysteries in Paradise blog continues this week with the letter F. As part of my contribution I offer the following review of a late but great novel in the Ellery Queen series by its creators, Frederic Dannay and Manfred Lee that finds the maestro, his Inspector father, Sergeant Velie, Doc Prouty and one JJ McCue in fine acrostic form. F is also for ‘Friday’s Forgotten Book’, this week hosted by Todd Mason over at Sweet Freedom.

Readers may have to forgive a certain amount of adolescent emotion as I write this brief review because this was the first Ellery Queen book I ever read – and I still think it’s a great read. I picked it up in June 1983 when it was republished (in Italy) by the Mondadori group’s ‘Classici del Giallo’ imprint under the title ‘Ellery Queen e la parola chiave’ (literally EQ ‘and the key word’). I can tie my enormous affection and love of the Queen style and characters directly to that reading experience – had I picked up a different book in the series, things might have turned out differently perhaps. But I was 14 and impressionable and just starting to fall in love with the traditional whodunit. What I didn’t 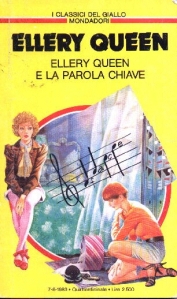 know, at the time, was that this was (apparently) the first of the books in nearly 10 years to have been written without the use of a ghost writer and was thus the first bona-fide collaboration between Frederic Dannay and Manfred Lee. The two cousins had collaborated closely and fractiously since the 20s but Lee started suffering from writer’s block in the late 50s, so when Dannay started plotting new adventures, he got the likes of Theodore Sturgeon and Avram Davidson to flesh these out, starting with The Player on the Other Side (1962). Lee did some editorial work on these and oversaw the paperback originals published under the Queen name but not featuring the character, which were instead written by the likes of Richard Deming, Fletcher Flora, Talmage Powell and Jack Vance.

“Ellery remembered Glory Guild … even the memory of her voice sufficed to tickle his giblets.”

If we take it that this was the first book by Lee and Dannay since the 50s, and this is subject to some dispute (see below), then it might help to explain the many references to the previous adventures in the series. What is certainly true is that it is a book set in present but with a constant eye on the past. Glory Guild was a popular pre-War singer long-since retired. Enormously wealthy, she has married a latin lothario, ‘Count’ Carlos Armando, known for his

seductive charms which have resulted in a great many marriages to wealthy older women, which usually ended shortly afterwards and a healthy payout for him. Guild knows his reputation so has him sign a prenup, promising to tear it up if he is faithful for five years. When the time is up she apparently does this and, shortly afterwards, is found shot to death in her study, having written four letters on her notepad: f a c e. As is so often the case in Queen novels, there is an instigator to the crime manipulating a person to act as their instrument and weapon. In this case we are sure right from the start that Armando is the person who got the deed done, but he has an alibi – so the question is, which woman did he charm into actually committing the murder?

“Ah me and oh my,” Ellery mourned. “Wouldn’t it be tidy if she’d left a dying message? But that’s too much to expect.”

So the questions are: what does ‘f a c e’ mean, and who did Armando get to execute his plan? In this book Ellery is partnered by Harry Burke, a Scottish private investigator (late of Scotland Yard) who had been hired by Guild to find her long-lost British niece – who, it turns out, is in fact living in New York and trying to also make it as a singer. The two arrive in New York from London on 30 December, the night of the murder, and are contacted by Roberta, one of Armando’s previous conquests. She reveals to them that he had proposed that she kill his wife seven months earlier and that she had broken off their affair right away, unsure how serious he was. But on the night of the murder, Armando presented himself at her flat and made a point of staying until midnight, which just so happens to be 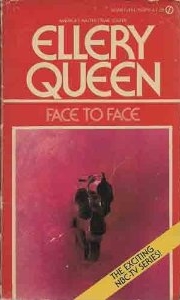 the time of the murder, so giving himself a solid alibi. She is sure he must be responsible but has no idea who actually pulled the trigger. Harry is quickly smitten with the girl (who he occasionally calls ‘Bert’, apparently as a sign of affection …) and eventually gets her to move in with Guild’s niece, who has inherited the lady’s vast fortune. Things seem to be going well for the two young women until the murder weapon is found in the apartment and the niece is put on trial for murder as she had visited her aunt shortly before her death. A potential witness might be able to clear her name but he is stabbed – Ellery and Harry will have to work fast to find out who the murderer is and what Guild’s cryptic message really meant.

When I posted my list of 9 of the best by Ellery Queen, my penultimate choice was Face to Face, and I stand by it. It is less rich and complex that the heavyweights of the late 40s and early 50s but compared to all the other entries from the 1960s it is, with the possible exception of the not dissimilar The Fourth Side of the Triangle (which was actually written by Dannay with Avram Davidson) the least convoluted and deliberately artificial of

the Queen novels published during that decade. George Kelley has speculated (here) that Lee did not contribute to this book and that it was in fact ghosted by Jack Vance from a Dannay synopsis, though there seems to be little hard evidence for this. The book seems to be written by an older man looking back on his past and approaching the present with disdain. Indeed, it struggles, not always successfully, to seem hip and with it in its dealings with modern culture (words like ‘faggot’ and ‘orgasm’ get used and there are disapproving references to the Beatles and Fellini). Ellery certainly seems somewhat cast adrift in the mid 1960s, though this suits a slightly melancholy air to the story, which is bourne out by the sad but clever climax.

The solution to the dying clue is ingenious if a bit thin really but the characterisation of the intimate cast of suspects is strong, which helps make the finale quite powerful. There are proper clues on how to solve the mystery too, which has a nifty sting in the tail. I certainly remember being quite affected by it as a teen. Almost thirty years later, I find that I still remember this book quite clearly from that initial reading, which must be a good thing. If this had been the end of the series, it would have been a good way to go out. Lee and Dannay would complete two further Queen adventures, both ingenious if less ultimately satisfying: The Last Woman in His Life (1970), which picks up literally a few minutes after the end of Face to Face but again shows scant understanding, or interest, of changes in modern society,

and A Fine and Private Place (1971), which is mostly entertaining as a puzzle that, while a bit stodgy, does pull off a remarkable structural gambit that, to my knowledge, has never been repeated in the genre. Did Ellery really retire to Italy and raise a bambino there? The febrile and show-off character of The Roman Hat Mystery is not the soulful one depicted here, that is certain, but it is interesting to speculate on whether this might have been intended to effectively close the circle. We shall probably never know, though publications about Dannay and Lee like Blood Relations: The Selected Letters of Ellery Queen (reviewed brilliantly by Curt Evans here) have recently cast a fascinating, if saddening, depiction of their lives and collaboration.

This entry was posted in 2012 Alphabet of Crime, Crime Fiction Alphabet, Ellery Queen, New York, Scene of the crime and tagged frederic dannay. Bookmark the permalink.