I saw this movie at a sparsely attended screening in Berkeley, California in the Spring of 1989 but it has stuck with me as a superior manhunt thriller that deserved a better commercial fate. It has a compelling subject – the rise of white supremacist movements – and it is shot very stylishly. The latter should come as no surprise as it was directed by the great John Frankenheimer, though he probably made more bad movies that almost any other comparable filmmaker of his generation. The film is based on a real case investigated by Jerome ‘Bulldog’ Beck, a Detective in the Los Angeles County Sheriff’s Department, which was profiled by James Ellroy in his book Crime Wave with Beck and the movie getting a brief mention.

“If I get pulled off of this case because you look like Woody Allen, I will not be responsible for what I will do. If you’ve got some dues to pay there, then by God you pay them, because I will not. I will ‘fixate’ on you as the instrument of my destruction and you will never feel safe in your world again.”

Maybe its just me, but in my mind movies often tend to be defined by a single moment or sequence that encapsulates the totality or anyway the best of its ethos and spirit (or lack thereof) or at least my experience of it as a viewer. Many of my most cherished movie visits from 1989, when I was visiting my girl friend in San Francisco and having a very giddy time of it, were often like that, especially if they involved a bit of silliness. For instance, there’s the “I’ll have what she’s having’ scene in When Harry Met Sally; the ‘electric ear cleaner’ moment in Parenthood; or the day-glo ‘cock fight’ in Blake Edwards’ criminally undervalued male menopause comedy Skin Deep. In Dead Bang it’s an extraordinary and profane moment in which our cop hero tracks down his quarry after a long and dynamic foot chase – and then, having already knocked him down and handcuffed him, proceeds to throw up on the poor man! Well, as a method of eliciting a confession from a suspect, I definitely hadn’t seen that in a movie before!

Our antisocial hero with the bilious tummy is Jerry Beck, who right away is presented in what is now a stereotypical fashion as a cop with an attitude problem – indeed, in some senses he’s little better than a collection of clichés in a wrinkled jacket! In an economical title sequence we learn that even though it is Christmas, this is not the season to be jolly as Beck has a truly terrible home life. He has just split up from his wife, is having to live in a rat-infested motel (just under Burbank airport) while divorce lawyers take his very last dime, all capped by the arrival of a restraining order keeping him away from visiting his kids. Is it any wonder that he is supremely stressed out, constantly frustrated and drinking far too much? In fact, it is quite common for people to keep telling him that he doesn’t look well. Hell, even the perps he is catching are worried about the state of his health!

Beck is a pretty unsympathetic characters – constantly angry and with a terrible temper, he is forever butting heads with those he sees as petty bureaucrats, puffed up small-town law enforcement officials and tin pot tyrants from federal agencies, though thankfully these are played by some of Hollywood’s best character actors. First off is Bob Balaban as the probation officer who is annoyed by Beck’s insistence that they work even though it’s Christmas day and who eventually gets more or less ‘kidnapped’ by the detective who refuses to take ‘no’ for an answer. The there is the late, great Michael Jeter as the shrink Beck is sent to for an evaluation, but which goes wrong when the detective laughs at him as he looks a bit like Woody Allen. This is a frankly bizarre scene, one that is resolved by our protagonist threatening to do some terrible things to the shrink. Then there is Brad Sullivan as the sheriff who is convinced that there is nothing to worry about in his jurisdiction but who, just as he is being really condescending to Beck, then gets shot at by the villains of the piece – and best of all, William Forsythe as the slightly prissy FBI agent who hates Beck for his use of profanity but is not above taking all the credit and the glory once the case is wrapped up.

After the title sequence, Frankenheimer creates a masterful tracking shot as we follow a man sporting jeans, a T-shirt and a baseball cap who we only see from behind – as the camera swoops over a house and follows him to a small town convenience store, we see in a mirror that the man has now pulled out a gun. Despite getting all the money there is, he kills the cashier in a fit of racist rage. When stopped by a policeman, the man (who we never quite get a good look at) kills the officer. Beck narrows his suspect list to a recent parolee, ‘Bobby’ Burns, who is known for his affiliation with the Aryan brotherhood and other unsavoury groups. Beck tracks him down to the ramshackle house where he lives but initially only finds his brother (fresh-faced Tate Donovan), visiting from college for the holidays. He arrests (and vomits on) a man who thinks is Burns, but gets the wrong man, a telling moment as Beck keeps making mistakes. Indeed, one of the amusing things about this film is how often Beck is just plain wrong. It even turns out that the gorgeous Penelope Ann Miller, with whom he has a Christmas night fling, had an ulterior and thoroughly ignoble motive for wanting to sleep with him. At least when Mickey Jones appears as a violent hillbilly (of course), he is true to his character and just hates everyone on sight. 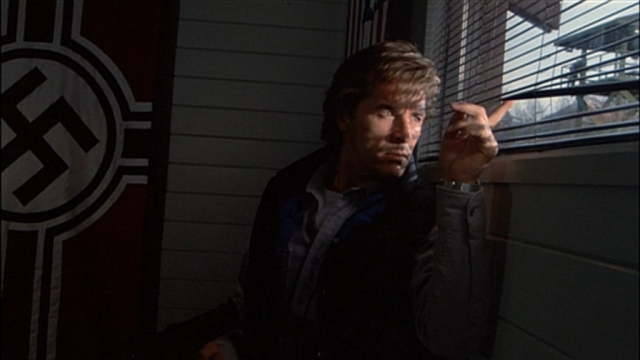 Beck discovers that there is a plan to bring various white supremacist groups together into one coordinated organisation, a notion rejected by the FBI and initially even his bosses. Beck realises that local law enforcement is protecting Reverend Gebhardt, a who flies swastikas in his home, and who is clearly harbouring Burns and in charge of the master plan for the new ‘master race’. In a nice touch, Beck gets nowhere until he meets a local sheriff, played by Tim Reid, who recruits seven African-American officers who are finally prepared to take Beck’s claims seriously.  This is very typical of the kind of liberal sentiment that Frankenheimer injected into his films, and really helps makes this film standout. He probably produced his best work in the 60s and 70s and remains best known for such classics as The Manchurian Candidate, Birdman of Alcatraz (both 1962) , Seven Days in May (1964) and Seconds (1966).

Like his French Connection 2 (1975), Frankenheimer often made thrillers with a serious underlying theme, though it has to be said that Dead Bang plays mostly as an above-average chase thriller, with not enough emphasis paid to the serious subject matter. Instead we get some superb suspense sequences and a thriller constructed with enough care by screenwriter Robert Foster to include a nice sting in the tail when once again it looks as though Beck really was wrong all along. great production design by Ken Adam (who did most fo the Bond movies in the 60s and 70s as well as a couple of films with Kubrick), and have to put up with Don Johnson as the lead. Riding the crest from his Miami Vice TV stardom, he gets to pout and swear a lot but not much else, but then he really is meant to be quite annoying, and he really is. And we do feel a bit sorry for him, a man who really can do nothing in the end but solve the case, even though this is achieved more by blundering and grim determination than anything else. This is a great B-movie, well-worth looking out for (if you can find it).

DVD Availability: Released quite a few years ago in the US in a fairly lousy pan and scan edition, the best home video release is probably the one that came out in Australia (PAL DVD Region 4) – no extras but a great anamorphic widescreen image, preserving the strong colour schemes and compositions of cinematographer Gerry Fisher.