Posted on 8 May 2012 by Cavershamragu

Spencer Tracy and Katharine Hepburn starring in a murder mystery, produced by MGM and directed by George Cukor – really? Oh yes, though there is no denying that this is perhaps one of the more unlikely of the nine Tracy & Hepburn pairings made between 1942 and 1967. Indeed, some viewers may be more familiar with it due to the use of some clips in Carl Reiner’s clever parody, Dead Men Don’t Wear Plaid (1982) starring Steve Martin alongside stars from several classic and not so classic movies of the 1940s. In its own way though it deserves to be remembered as more than a footnote in movie history, not least because this combination of propaganda and whodunit also plays like a more commercially orientated,  star version of Citizen Kane, the classic directed, produced, starring and co-written by ‘enfant terrible’ Orson Welles that had impressed and upset Hollywood in equal measure just a little over a year before. Like Kane it begins with the death of a rich and powerful American and charts a journalist’s investigation into that man’s life …

“I said to myself, quite calmly, he’ll come this way and be killed unless you hurry and warn him. And I didn’t warn him because …” – Christine Forrest (Katharine Hepburn)

The links to Kane positively abound in this movie – apart from the basic storyline of an examination in the truth of the life and death of a great and powerful American tycoon, here World War One hero Robert Forrest, it also depicts the man’s life largely though his home, which is presented as an enormous, cavernous property to which we are introduced courtesy of the large ‘Keep Out’ signs outside. Like the Kane property, this is a house that also has a museum-like feel, even the dwelling of the gatekeeper (a typically great study in understatement from Howard Da Silva) adorned with a large and unlikely sculpture of a sphinx. As the reporter speaks to the various people who knew and loved him, a dark and inconsistent picture of Forrest emerges, concluding with a climactic fire at the property. Intriguingly, the film was originally going to be made by RKO, the studio that made Welles’Kane, before MGM decided to buy it off them. 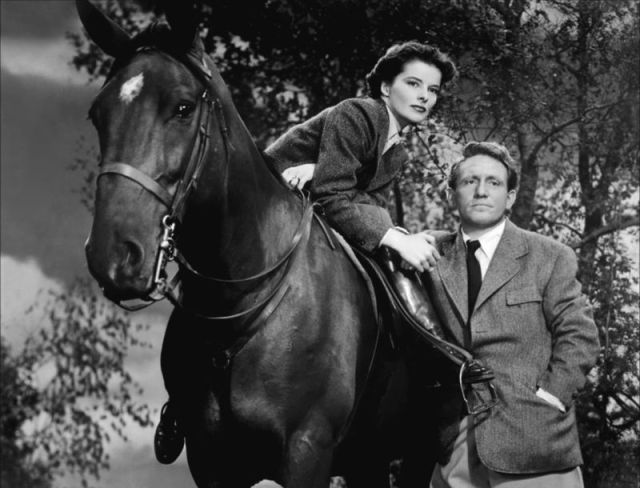 The finished film is certainly redolent of the opulence and gloss one associated with MGM, indeed it also plays like a slightly perverse retread of Hepburn and Cukor’s last hit for the studio, The Philadelphia Story, which incidentally also had a screenplay by Donald Ogden Stewart and is also about a pair of journalist invading the home of a rich woman, being met with hostility and discovering a few skeletons in her family’s closet. Although one can see in these connections that this is not a film that emerged without a context and a pedigree of sorts, Keeper of the Flame was none the less an unlikely project in many ways, not least as a box-office follow-up to Woman of the Year (1942), the romantic comedy drama with which Hepburn and Tracy has just had a sizeable hit at MGM. For starters it is a murder mystery, although we don’t know that at the start, and one on which Hepburn is cast as the somewhat unlikely ‘femme fatale’. Added to top of which comes a subplot involving emerging fascism in America before its entry into war, so that you have a mixture that just doesn’t seem like the kind of fare associated with the grand MGM. Indeed, Mayer is said to have hated the finished film … 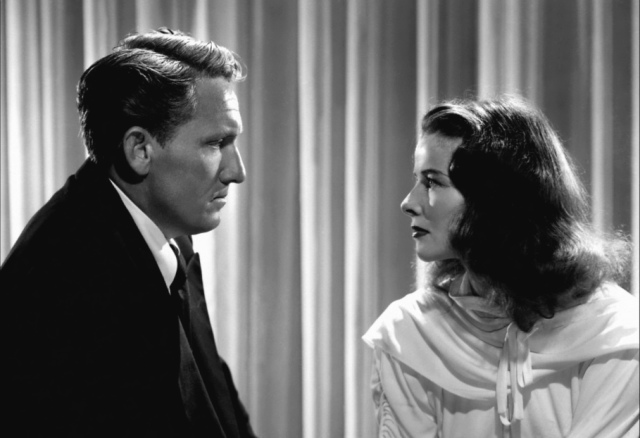 It is hard to discuss the mystery aspects of the story without really getting in to spoilers, but none the less we are put on guard fairly early on that there is something not right in the Forrest household. The man was a beloved figure, compared in the film to Abraham Lincoln and Alexander the Great, and the opening section of the film, after a dramatic curtain-raiser in which his car crashes down a ravine during a storm-swept, lightning streaked night, deals with the funeral and mourning over his death. Forrest had enthused thousands of pro-America groups throughout the nation and he had a special appeal to the young. Our hero is Steven O’Malley (Tracy), a journalist just returned from reporting on the horrors of the war in Europe (the film is set in September 1941) and who is clearly quite traumatised. He wants to write a book about Forrest, to celebrate a hero at a time when the world needs that the most. Forrest’s widow Christine (Hepburn) initially refuses to meet the press and instead they have to make do with Kerndon, Forrest’s  unctuous secretary (Whorf). O’Malley befriends Jeb, the son of the gatekeeper and is able to smuggle himself in and eventually convinces her to let him write his book.

Tracey, Hepburn and Cukor on the set of ‘Keeper of the Flame’.

Right away though we realise that there is a very uneasy atmosphere in the house and a great deal of tension between Christine and the secretary, who really does seem to be exceeding his brief somewhat. Kerndon, who becomes increasingly agitated as the film progresses, is played by Whorf in a somewhat heightened manner, and his emotional unglueing can be seen as an index of how far the movie will eventually lurch towards melodrama as the mystery aspects of the plot emerge, in what is otherwise a fairly talkative and sedately paced movie. Although this is also a very earnest film, early on there is at least some banter and humour between O’Malley and his newspaper buddies (including a very early role for Stephen McNally, still billed under his real first name ‘Horace’ and sporting a pencil mustache), who help keep him on the story when it becomes clear that he is falling under Christine’s spell. She seems much too close to her cousin (Forrest Tucker), who has returned to the house having been previously barred by Forrest and whose money worries now mysteriously vanish. Then there is the mystery of the disappearance of Jeb’s sister. Did she have an affair with Forrest, with whom she was clearly infatuated just like everybody else? And why is Forrest’s elderly mother being kept from O’Malley? And just what is being kept in the ‘Arsenal’, an 18th century one-story stone building without windows on the estate? Why did Christine take a different route home and so not warn her husband that the bridge out of the estate had crumbled?

Eventually all is revealed and the  climax concludes with gunshots, car chases, fire and a couple of deaths. If the film is remembered today it is mainly for its attempt to alert America to the dangers of homegrown fascism (predictably it was disliked by some Republican politicians at the time), which is presented in very general terms here (this is MGM after all). This results in a somewhat muddled picture, one that looks wonderful (the almost symbolic image of the broken bridge from which Forrest’s car fell is beautifully rendered through miniatures and matte paintings) with some great production design but which doesn’t seem to quite be able to decide just how much on a limb it is prepared to go with its political message. The real villains of the piece in fact remain off-stage, though this does provide quite an ambiguous edge to the rushed finale, one that may have been unintentional but which stops the film delivering answers that are too pat, which would, at a time of war, have been clearly unreasonable. So, a good-looking movie made in the best MGM style sporting a very good cast (and Percy Kilbride for comic support as a taxi driver), an unusual plot and some truly top-notch credentials behind the camera. If it is too earnest to be a complete success, it gets plenty of brownie points for trying and there is more than enough going on to keep viewer interest alive over its 100 minute running time.

At the time, Bosley Crowther at the New York Times welcomed it fairly warmly:

“Keeper of the Flame” is a courageous and timely drama which touches frankly upon a phase of American life that is most serious and pertinent today. And in it Mr. Tracy and Miss Hepburn perform with a taut solemnity that is in decided contrast to their previous collaborative roles.

A surprisingly detailed and well-researched look at the film can be found on Wikipedia (I’ve amended some of its small factual errors).

DVD Availability: The film is generally available on DVD from Warner either as a stand-alone release or as part of a Tracy-Hepburn box set. The image transfer is perfectly acceptable though it is a little scratched. No extras.