Posted on 14 April 2012 by Cavershamragu

Today we return to the world of Ed McBain’s 87th Precinct mysteries as I continue my challenge to read the entire series in its original publication order. For our reviews of  previous volumes, visit the dedicated miscrosite here.

“He was taking a deep breath of Spring fresh air when the bullet struck him between the eyes and killed him.”

It is Spring  in Isola and McBain opens his novel with a long and humorous paen to the beauties of the season, though we know from experience that we are probably being led up the garden path to discover something dark and sinister. To be precise it’s 25 April 1963 and sure enough, there is a murder. Detectives second grade Steve Carella and Meyer Meyer are sent to investigate the shooting of middle-aged executive Anthony Forrest in the middle of a busy street, felled by a .308 calibre Remington bullet just after leaving his office building. Apparently liked by everyone and with no apparent motive for the crime, Carella has to go empty-handed to deliver the bad news to the family.  With no apparent leads, Forrest’s 19-year-old daughter Cindy, who currently taking a psych course, takes a special interest in the investigation – and the detective too. This introduces an unusual dynamic, a hint of something potentially perverse, though this had already been touched upon at the scene of the crime in a light-handed manner through the banter of Homicide North’s Tweedledum and Tweedledee duo of Monoghan and Monroe.

“Oedipus,” Monroe said. “He was this Greek king. He slept with his old lady.”
“That’s against the law,” Monoghan said.”

The allusions to drama (from Oedipus Rex by Sophocles to The Long Voyage Home by Eugene O’Neil) and to warped sexuality are not casual and will eventually move centre stage in this fairly subtly developed novel, one of McBain’s mostly smartly engineered entertainments in terms of developing its theme and making the most of the flexibility of the police procedural genre. There are no clues as to why this man was shot from a rooftop with a high-powered rifle, but when a few days later a lawyer of a similar age is also shot with a bullet of the same calibre, the detectives find it increasingly hard to ignore the frightening possibility that they have a sniper on their hands and there is in fact no pattern to discern and no motive to unearth. A strange sense of urgency and fatalism starts to build as the murders continue with the shooting of a skid-row prostitute and then a well-liked fruit-seller. Finally, when an Assistant DA is gunned down in his favourite restaurant, this becomes a full-scale manhunt with Carella given virtually unlimited resources to track down the mad killer and stop the apparently senseless shooting spree. Right from the first book in the series, Cop Hater, McBain had shown his alertness to mystery conventions by combining a series of apparently unrelated murders with a hidden plot akin to that found in Agatha Christie’s classic The ABC Murders. This approach is revisited here by combining a traditional story of a revenge with its origins buried in the past with is a story about the then a newish phenomenon of the sniper (though the cinema had as far back as 1952 made a Film Noir with a sociological bent on the theme, called appropriately enough The Sniper). That McBain is consciously combining, and contrasting, two traditions within the detective genre is emphasised by a scene in which Kling, still wary of women after his recent tragedy in which he lost his fiancée, pulls a gun on Cindy when she enters the squad room unannounced looking for Carella. Kling’s reaction is clearly over-the-top, though motivated, as he eventually tells her when he makes his excuses (she tells him to “Drop dead”) by what happened in similar circumstances in Killer’s Wedge, in which the detectives were held hostage by a woman wielding a gun, a bottle of nitro and a desire to kill Carella while the man himself is out solving a locked room mystery – two cases, casually linked, from two totally different traditions in the mystery genre.

“You know, there are times when I think you’re Jewish,” Meyer answered.
“When I think of what happened in Germany, I am Jewish,” Carella said. 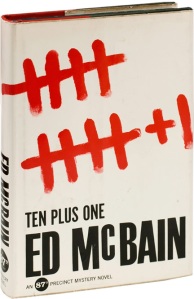 One of the advantages of the procedural genre as a whole, and McBain’s 87th Precinct’s series use of a corporate hero in particular, is that it allows for several stories to run in parallel without the need for them to necessarily intersect (think of any of the Dirty Harry movies for instance). There is usually one main plot and then several other minor ones that flit around it – in TV terms this would be referred to as having a plot-heavy A story, followed in order of importance (and usually screen time) by a more personal B story and a slightly comedic C story for light relief. Most traditional TV shows still take this approach, with the maybe an overall continuing storyline arching over the entire run. Ten Plus One puts this approach to particularly good use with a fairly episodic structure which slowly but surely explore different aspects of violence and prejudice in society. When Carella interviews a potential suspect, a man originally from Germany but whose son, killed in the war in Europe, was born in the USA, he becomes aware that his Jewish partner Meyer is made very uncomfortable when the discussion briefly turns to the war. McBain displays his characteristic mixture of sentiment and humanism as references to the continuing trauma of war atrocities, committed both by the Nazis and by American snipers in the Pacific, provides a way into what turns out to be a rationale for the random murders, linked to a brutal sexual assault at the beginning of the war. 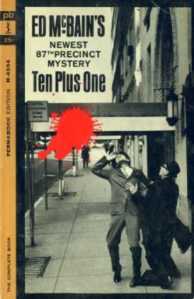 Carella’s generally compassionate stance is contrasted with one of the most chilling and well executed parts of the novel, when a whole chapter is devoted to the activities of two first Grade detectives from a different precinct who make the 87th resident bully Andy Parker look like a shrinking violet by comparison. Assigned to the case after the case heats up, they ignore Carella’s advice and insist on interviewing an ex-con on parole with only a tangential relationship to the deaths. They take him to their station and for hours torture and physically assault him until they are satisfied that he knows nothing – they then send him back to prison on a trumped-up charge, completely uncaring of the fact that they have nearly killed an innocent man and sent him back to jail for several years without any reason.

Having produced titles in the series at a fairly constant rate of three a year, McBain would noticeably slow down from her on in, usually producing just one a year – and this was the one for 1963. It is a little longer than most of the books up until now and is a very smooth written and confidently plotted piece of work, which is just as well as structurally this is an unusually episodic narrative. As the murders continue, through various episodes McBain contrives, humorously and dramatically, to examine the tension this creates but not to suggest that the turning of a giant city will come to a standstill just for this. Life does go on and so do our heroes, cops doing their jobs and carrying their own burdens and prejudices. Entire pages for instance are dedicated to decrying the risible statutes on prostitution. It may not seem directly germane to the book beyond the link to one of the murder victims, but it does illuminate the novel’s unusual thematic subtext which examines facets to many unusual ways attitudes to sex and sexuality and its destructive potential. Early in the book Cindy refers to effect on the young psyche of a sexual ‘primal scenes’, a concept she has to explain to Carella, and we are in a sense provided ultimately with one to explain the story – and yet it is almost irrelevant. This is probably the real difference between this book and earlier examples of stories of random psychos like Philip MacDonald’s wonderful classic X vs Rex (aka Mystery of the

Dead Police) in which a great villain brings London to its knees until a genius sleuth can stop the carnage. McBain’s approach is much more plausible, though ultimately he does provide a resolution and a motive, though it has to be said that unlike Cop Hater, he is probably a bit less successful in integrating these two facets. The link to the killer’s motives, while artfully concealed (though probably not from practised genre readers), isn’t quite enough to explain a death toll of nearly a dozen by the end of the book. None the less, with its small cast of regular characters and a long list of victims and a broad range of episodes in major and minor keys, this is one of the best of the 87th Precinct mysteries thus far.

The novel was made into a French movie in 1971 as Sans mobile apparent, known in English-speaking territories as ‘Without Apparent Motive’ with Jean-Louis Trintignant starring as ‘Stéphane Carella’ and most of the other characters from the novel jettisoned.