Posted on 10 April 2012 by Cavershamragu 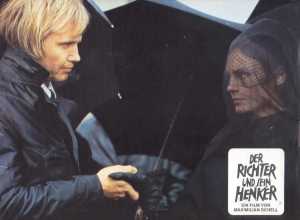 In 1950 Swiss novelist and playwright Friedrich Dürrenmatt published his existential crime classic The Judge and His Hangman, which I previously reviewed here and which I have also listed in my ongoing list of Top 100 Mystery Books. Twenty-five years later, it was turned into a supremely quirky film by actor-director Maximilian Schell from a screenplay he co-wrote with Dürrenmatt himself. It had already been adapted several times in other media including TV and radio, but this should be the easiest to track down – and yet … Released originally as Der Richter und sein Henker (the title of the original book), it was generally shown theatrically in English-speaking territories as End of the Game but it has also been released under a variety of other titles (especially on video), including ‘Deception’ and ‘Murder on the Bridge’, which is what it was known as for its initial engagements in New York in 1976. This hasn’t made it any easier to keep track of this movie, even though it features such major stars of its day as Jon Voight, Jacqueline Bisset, Robert Shaw (and even Donald Sutherland, albeit in a truly bizarre cameo as a murder victim).

“Corpse provided by Donald Sutherland” – title from the closing credits 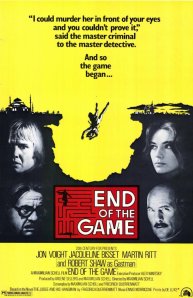 The film was an Italo-German co-production shot in English, with 20th Century Fox handling distribution in the US. It features a bewilderingly mixed international cast and crew, with Martin Ritt, the celebrated American director of such films as Hud (1963), Norma Rae (1979) and The Spy Who Came in from the Cold (1965), starring as Bärlach. He had just directed Voight in Conrack, while Schell had just appeared opposite Voight in The Odessa File (both 1974); and Bisset was due to make St Ives (1976) with Schell shortly afterwards. If this tends to suggest that this was a film made as a bit of a lark, or at least more for reasons of friendship than career-improvement, well that is certainly borne out by viewing the finished movie.

“I have to continue to commit crimes before your eyes.” – Gastman

It follows the plot of the novel extremely closely, though it initially makes a break from its structure with its opening section set in 1948 Istanbul, creating a prologue to the rest of the narrative. It introduces, obliquely, the three main protagonists: Bärlach, his life-long enemy whose real name we never discover (here only seen from behind, but later played by Shaw) and an occasionally glimpsed third party, an observer sporting oversized spectacles who is symbolically meant to represent us the viewers and who is played in fact by Dürrenmatt, who appears basically as himself playing a character named ‘Friedrich’, popping up a few times before an extended sequence in which 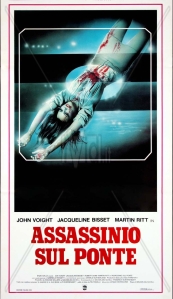 he explains Bärlach’s methods and motivation to Voight’s character while playing a game of chess (against himself, of course), which is fair enough I supposes (Paul Bowles serves a similar function in Bertolucci’s version of The Sheltering Sky). This opening section is quite jarring in its jangled editing rhythm, with crucial plot information handled in a cursory fashion as voice-overs are added to make sense of seemingly quite disjointed images as we follow two young men and a beautiful woman (played by Italian actress Rita Calderoni) walking along the Bosphorus. The seeming idyll is shattered when one of the men punches the woman in the face while she sits carefree on a bridge, and so sends her into the water and to her death while the other man tries to rescue her.

While in the novel this incident took quite a while to emerge, here we start the film with a dramatic flourish and set up the main revenge narrative – Bärlach as a young man had foolishly accepted a bet made by a friend (later known as Gastman) that he would be able to commit a murder and get away with it. The killing of the young woman, who it turns out was pregnant and whom they both loved, symbolizes the monstrous egotism of Bärlach’s nemesis and the death of innocence in a corrupt society. 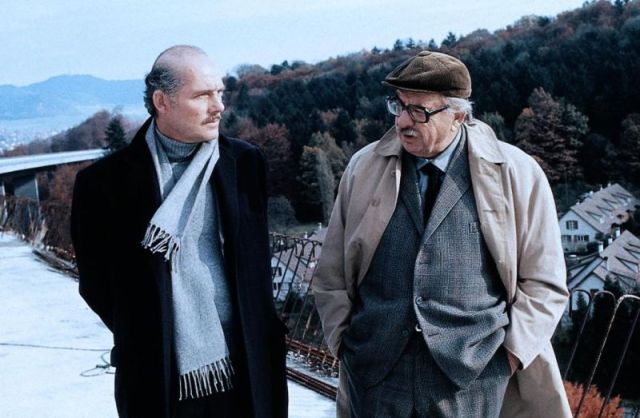 We now cut to thirty tears later and the discovery of a dead body inside a car on a foggy country lane in Switzerland – fog, both literal and metaphorical, will shroud most of the film, either through the liberal use of smoke or by applying filters on the lens, providing a dreamlike atmosphere well in keeping with the increasingly anti-naturalistic style. Once again Dürrenmatt’s observer can be spied lurking behind a nearby tree. What follows is a blackly comic sequence in which the beat cop who finds the body decides to drive the car away for the sake of decorum – which sees him heading into town with an uncooperative corpse (Sutherland) lolling in the seat next to him, causing many a  double take from passers-by. In many ways this sets up the tone of the film, which has a kind of odd jocularity in its blackly comic depiction of Switzerland as a place in which claims of propriety and ‘the greater good’ are used to mask acts of supreme venality. The novel was set in the immediate post-war, a difficult time for Switzerland as it had to come to terms with what remaining ‘neutral’ during the Second World War had really meant. Twenty-five years later and the emphasis is now more reflective of the sense of estrangement from traditional politics as the Establishment on the Continent found itself challenged by acts of terrorism and civil disobedience almost on a daily basis during the so-called ‘Years of Lead’. 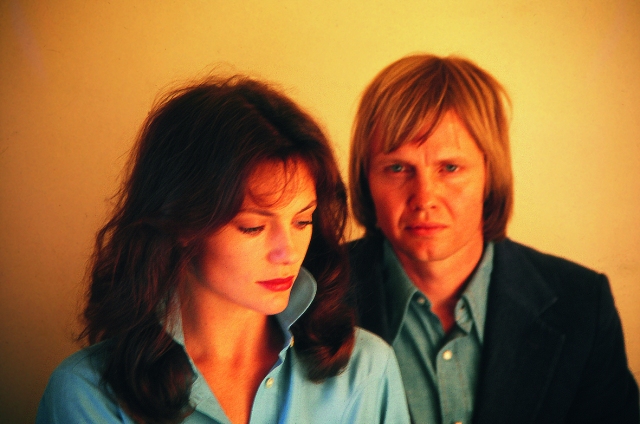 The dead man was working undercover for Bärlach to infiltrate the inner circle of his boss’ old enemy – a powerful industrialist calling himself Gastman. His replacement is a detective played by Jon Voight, who seems as eager to take his place as to get into bed with his ex colleague’s girlfriend Anna (the beautiful Bisset). One of the major alterations to the book for the film is in the expansion of Anna’s role, who here becomes Gastman’s mistress as well, a sort of substitute for the young woman he murdered in his youth. This of course makes the role more suitable for a star like Bisset to play (she appears only for a few pages in the book) but also helps connect the various parts of the plot – in my view it’s a major improvement on an already formidable work. Bisset plays the role pretty much straight, while Voight, using his vaguely Germanic ‘foreign’ accent from The Odessa File, gives a decidedly mannered performance, seemingly finding it necessary to underline every single piece of punctuation in the script. Given the equivocal nature of the characters, none of whom are being entirely honest, his can be seen as quite a brave approach by the time the film has finished, but none the less it is often irksome to see him grinning or angry for no apparent reason  and the style also clashes badly with the naturalism of Ritt’s old detective and Bisset’s shady Irish dame, with whom he shares most of his scenes. 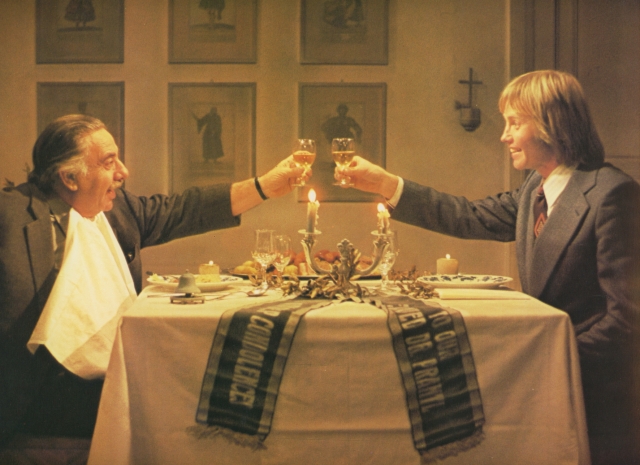 On the other hand, the expansion of Gastman’s role, as befits Shaw’s standing as the other major co-star, while full of truly eccentric details (including, at one point, an apparently severed head on a platter at one of his parties as well as a roaming cheetah), is also more traditionally villainous. Once again, what this tends to do is underline the more conventional aspects of the crime story with the often outrageous treatment, such as in the policeman’s funeral sequence in which, seemingly, the wrong wreaths are delivered; and the way that the chief’s attempt at a noble speech are undercut by a ridiculous brass band and very inclement weather. Shaw’s basically down-to-earth approach is probably most noticeable in an added airport sequence, in which he decides to dispose of one of his own henchmen and does it in full view of the police. It could be from any thrillers from the 70 and 80 really – you can see what I mean as it is available to view on YouTube:

The story does hold one’s attention and there is always something of interest going on, even if the emphasis in direction and performance does seem frequently arbitrary with the focus certainly devoted often to items of seeming secondary importance. Technically the film is fairly proficient, with a languid style very typical of 1970s Continental cinema, and featuring a score is by Italian maestro Ennio Morricone in one of his more relaxed moods. One wishes perhaps that Ritt, a more precise if less deliberate filmmaker, had directed the film and Schell had taken his role sometimes because overall the film, while always interesting, ultimately leaves one with more of a sense of bemusement than anything else. Its overt black humour often cancels out the undoubted seriousness of intent behind a film that clearly has something meaningful to say about the collapse of Swiss society. Oddly, the scenes featuring the bureaucrats (symbolised by an underused Gabriele Ferzetti as the Chief of Police) are curtailed compared with the book and that element seems to sputter out unconvincingly, though this may have something to do with the shorter running time of the Blu-ray I was viewing when compared with the official theatrical release length. 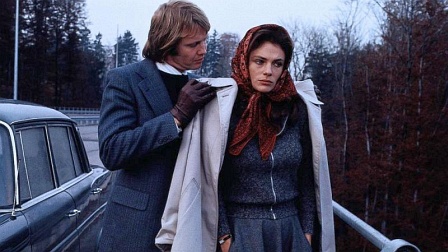 Either way, although faithful to the original source in terms of storyline and intelligent in the amplification of its female lead, this adaptation of the novel probably fails to really convince. Somewhat swamped by an over-emphasis on the absurdist elements in the book and which are much more pronounced in the author’s theatre work, the film disappoints ultimately because it is neither fish nor fowl – unwilling to really embrace the mystery genre conventions it adopts, it none the less can’t bring itself to leave them behind either and in fact adds several cliches of its own. On the other hand, while the scenes between the two ageing antagonists played by Ritt and Shaw suffer from some overuse of cliches, their scenes together do work, while those with Voight (who even plays one nude) tend to feel forced and fail to convince on their own terms. In the end we really do need to care about some of the characters, even if there are secrets to be uncovered. It’s a shame that despite many fine elements, this overly theatrical enterprise doesn’t really do the book complete justice. But it is worth seeing – and the book is a classic that definitely deserves reading and re-reading.

There is a recent review of the film over at Peter Hanson’s fascinating Every 70s Movie blog (which is also where I got the yellow movie poster image from). Since starting his site in October 2010, Mr Hanson has been extraordinarily industrious (he used to post a new review every day and sometimes more) and it is really worth a look, though it is assumed that readers will have seen the movie in question beforehand – so beware of spoilers!

DVD Availability: It is currently available on DVD and Blu-ray in Germany in a region-free edition with English and German language options. However, it only runs a little over 91 minutes – when screened in the US the official running time was 15 minutes longer but I have no information about the reason for the discrepancy. When screened in the UK in 1977, as The End of the Game, it had an official running time of 103 minutes, which was submitted to the British Board of Film Censorship. The version on the Blu-ray I have has a new copyright date from 1978 so I suspect that this was a revised edition. If anyone out there can explain the differences I would love to know the reason why and what they amount to. Nothing seems to be obviously missing when compared with the novel.