Posted on 27 March 2012 by Cavershamragu

This supremely seductive thriller – part cine-literate film essay, part heist movie – offers the possibility of redemption for even the unlikeliest past offender, which seems entirely appropriate because Femme Fatale was a box office bomb, but it really does deserve a second chance; and then maybe even a third. In fact, it may even require it, given the many intertextual secrets that it contains (sometimes hidden in plain sight). A story of cross and double cross and thieves falling out, it starts with a jewel heist that goes wrong, then folds in a paparazzo looking for artistic recognition, and blends it all together through the cocktail shaker of a slinky, sexy dame from the wrong side of the tracks who lies to absolutely everyone – even to herself.

At its considerable best, this film is a truly original neo-noir, one that despite several expected links to classical Hollywood cinema probably owes a lot more to the work of David Lynch. It is also unmistakably the work of one of Hollywood’s most distinctive and most controversial filmmakers – from start to finish, Brian de Palma’s naughty Parisian thriller is a postmodern delight.

Femme Fatale was rapturously greeted by such critics as Roger Ebert, who called it “… an exercise in superb style and craftsmanship” but was given short shrift by many others and it was given only a token theatrical release in the US and went straight to video in the UK (it did much better on the Continent). To some extent this is easy to understand as this is a real ‘movie movie’, clearly aimed at the film buff connoisseur, chock full of references to the director’s earlier films as well as homages to a variety of classic movies. Indeed the writer-director credit appears over a shot of a TV screening of Billy Wilder’s classic 1944 Film Noir Double Indemnity – albeit dubbed into French, as it is being viewed by our anti-heroine, who we can see vaguely reflected on the monitor, in a hotel room near the Croisette in Cannes.  This is certainly there to inform us that this will provide a look back to a classic genre, but with a decidedly post-modern sensibility. On its own though it is also an uncommonly elegant, witty and sexy heist movie. Featuring a diamond theft at the glamorous Cannes Film Festival, this is an adult thriller that will keep you guessing right up to its controversial end … but let’s not get ahead of ourselves.

For what turns out to be a complex yet subtly orchestrated sequence shot, the titles lead into a long opening take lasting several minutes to introduce us to ‘Laure’ (Rebecca Romjin), though we never see her except from behind, and her partner in crime (the amazing Eriq Ebouaney who in the film is only ever known as ‘Black Tie’). Using coded language, they are planning a complex diamond robbery, though it is also clear that theirs is an ‘uneasy’ relationship after he slaps her and takes off with her passport. Eventually her face is revealed (from behind a camera, of course) as she and two others get in position to make off with a ridiculous diamond-encrusted gold bustier being worn by a starlet at the Festival. Laure distracts the girl when she goes to the ladies room, while her two partners set up a power failure to get away under the cover of darkness. But there are the inevitable betrayals as, to the strains of Ryuichi Sakamoto’s lush rendition of Ravel’s ‘Bolero’ (referred to on the soundtrack as ‘Boleroish’), Laure makes off with the goods and Black Tie is shot and arrested. She flees to Paris looking to get a new passport, dons a black wig and attracts the unwelcome attention of Antonio Banderas’ paparazzo before being tracked down by one of her ex-confederates, who throws her off the balcony of the hotel where she has been hiding out. Miraculously she lands on something soft and even more miraculously, she is mistaken for a woman who looks just like her and whisked away by a middle aged couple and taken to a house so she can sleep things off. 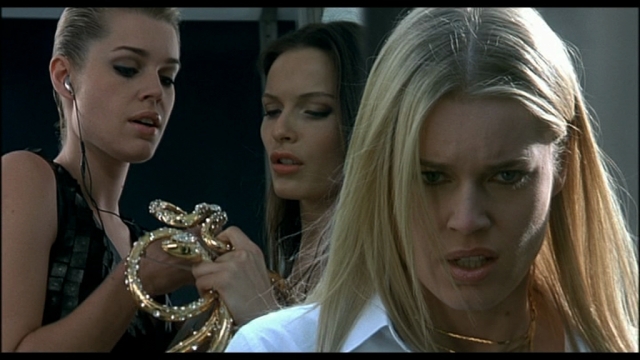 While taking a bath, she sees the young woman (also played by Romjin), grieving for the tragic loss of her family, shoot herself. Laure decides to assume her identity and flee the country. Cut to several years later. Laure is now the wife of France’s new US ambassador (Peter Coyote) but understandably wants to keep a low profile. But Banderas, as luck would have it, is hired to get a snap of her for the tabloids. This, when published, reawakens the interest of ‘Black Tie’, who is fresh out of prison and looking for vengeance. Banderas, a paparazzo with a conscience who is really a budding artist looking to get out of the tabloid racket, decides to track down this mysterious blonde and try and help her. But Laure is a true ‘Femme Fatale’, and has already set up a complex plan of her own – and she is looking for just the right man to help her bring it off … 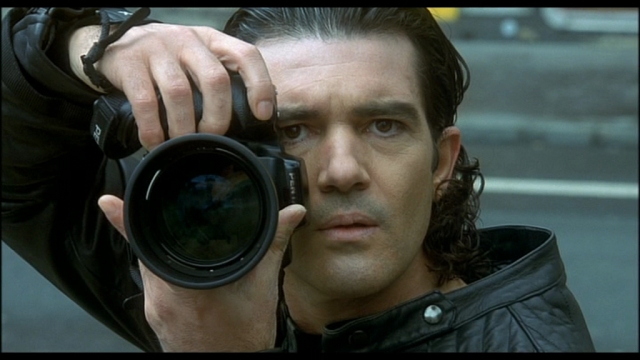 Okay, cards on the table – I am a huge fan Brian de Palma’s films. Now entering his fifth decade as a writer and director (his earliest credit goes back to 1960; after making several shorts and documentaries, his first solo directing features were Murder A La Mod and Greetings, both released in 1968), he has just started shooting Passion in Berlin, starring Noomi Rapace and Rachel McAdams. Throughout a career with several major box office hits (Carrie (1976), The Untouchables (1987), Mission: Impossible (1996)) and one major financial dud (Bonfire of the Vanities (1991)), he has remained remarkably consistent in his fundamentally iconoclastic outlook. Seemingly happiest when either baiting the establishment in such counterculture comedies as Hi Mom (1970) and Phantom of the Paradise (1974) or rocking the boat with his sexually explicit Hitchcockian thrillers Dressed to Kill (1980) and Body Double (1984) and indulging in the drug-fueled operatic ultra-violence of Scarface (1983), he remains happiest acting as a provocateur both in terms of his content and his attention-drawing aesthetic sense of the baroque. It is just possible however that Femme Fatale, one of his least heralded films of recent years, is also both his boldest, most personal and most completely successful film – and also his most nakedly emotional and romantic.

I love this movie and I’m giving it five fedora tips out of five – here are five reasons why, in reverse order:

5. Intellectually challenging cinema should be fun – the director makes use of split screens, slow motion, dream sequences, really complex camera moves, long single takes without cuts and much more besides to provides a truly mesmerising cinematic experiences along with a little sex and a bit more nudity and very little in the way of violence.

4. Music – the playful score by Ryuichi Sakamoto, whether using up-to-date synths or riffing on Ravel’s evergreen ‘Bolero’, perfectly matches the film, making the soundtrack almost as distinctive as the visuals.

3. Waiting for the sky to clear – in the climax we see a photographer waiting for the clouds to move to take a photo of a wedding party. It sums up the approach of the film as de Palma orchestrates everything within an inch of its life to try to create a perfectly satisfying whole, just as Bardo the paparazzo tries to create a piece of art from hundreds of real-life stills in his mural (created by the director’s brother, Bart de Palma). Ultimately the whole climax turns on a small slant of reflected sunlight …

2. We all deserve a second chance – this is ultimately a story about redemption, and this seems so right for a film desperately in need of some critical TLC and genuine re-evaluations. But don’t we all feel like that?

1. Because Romance is not dead – de Palma is often pilloried as a crass imitator of other, better, filmmakers, especially Hitchcock, and there are certainly nods to Rear Window, Vertigo and Psycho here. But this is also a distinctive, personal and deeply romantic conception, in love with the syntax of film and its malleable properties, one that repays several viewings as we realise just how carefully layers of meaning have been crafted into the whole (just keep an eye on the clocks and on some strange activity involving the supporting cast members). On top is a valentine to Film Noir; beneath comes a critique of its conventions; and beneath that a celebration and a summation of cinema’s ability to synthesise so many art forms to create nuance and meaning in a new work. A stunning achievement, especially if you have a sense of humour.

The film also has a truly innovative trailer which speeds through the entire movie in a couple of minutes without really giving anything away and yet being completely in sync with the overall theme and ambition of the project.

DVD availability: Released fairly quickly on DVD (first in France and then elsewhere), shockingly this release is OOP in some territories, including the UK. It offers an excellent video and audio transfer and some decent extras courtesy of de Palma biographer and documentary filmmaker, Laurent Bouzerau. Get it while you can (and please can we now have it on Blu-ray?)