Posted on 20 March 2012 by Cavershamragu 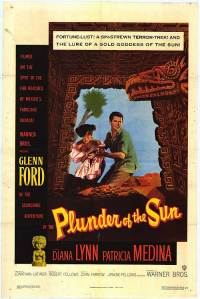 This is one of a small number of films produced in the early 1950s by John Wayne’s company (originally ‘Wayne-Fellow’, later ‘Batjac’) in which the star did not himself appear. Some became unavailable for several year and fell into relative obscurity – perhaps too quickly in this case though, especially given the presence of Glenn Ford in the lead role. A mixture of treasure hunt adventure and mild Film Noir, it was directed by John Farrow, one of the unsung heroes of the genre.

The following review is offered as part of the Tuesday’s Overlooked Film meme hosted by Todd Mason over at his Sweet Freedom blog.

“I decided to parlay a hairpin and a hunch into a little action.”

Shot in the winter of 1952, this adaptation of the eponymous novel by David Dodge (to be reviewed here soon) relocated the action from Peru to the equally exotic (but at the time more readily accessible) Zapotecan ruins of Mitla and Monte Alban in Mexico. This was of course a major selling point for the movie, with the result that quite often the travelogue requirements overwhelm any serious attempt to provide much more than a cursory sense of plot coherence. It certainly can feel like a bit of a collage of elements at times, which is a bit of a shame because in its various constituent parts this is a pretty entertaining adventure yarn.

We begin, as with so many example of Film Noir, near to the end of our journey and then claw our way back for the majority of the narrative. We open at a judicial inquiry in Oaxaca, Mexico. In a grand old building, which we are lovingly introduced to courtesy of one of Farrows’ trademark long tracking shots, members of the local judiciary are deciding the fate of Al Colby (Ford), an American adrift south of the border. After this intriguing start, we then flashback to begin the story proper as Colby begins his narration … Just one week ago, he was stuck in Havana without even enough money to settle his hotel bill. He gets a chance to square himself financially when at a bar he is approached by Anna Luz, played by glamorous beauty Patricia Medina who had recently divorced Richard ‘Robin Hood’ Greene and would a few years later become Mrs Joseph Cotten (incidentally she will be celebrating her 93rd birthday this July). 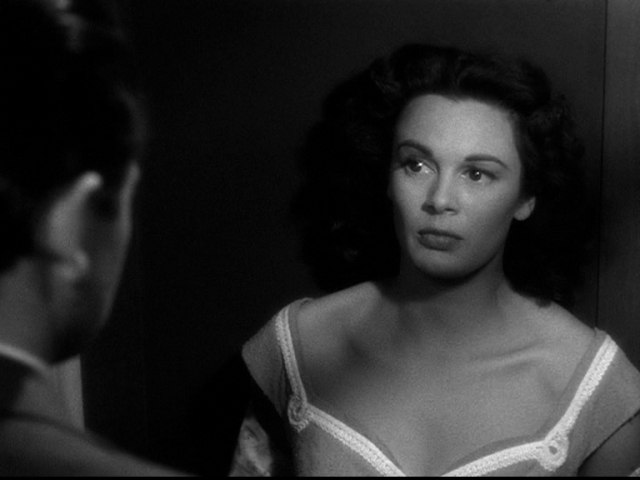 She says she is looking for a guide, but actually she is looking for a courier to help her smuggle antiquities into Mexico. Colby isn’t too impressed but after meeting her wheelchair-bound boss (heavyweight British character actor Francis L. Sullivan), and the offer of $1,000, he accepts passage on a ship to Mexico with the mysterious package. An amusing wrinkle is that the item in question is in fact being returned to Mexico rather than being exported out. On board he meets the other main players of the film: the heavy, played by the great Irish character actor Sean McClory, here resembling Peter Van Eyck thanks to a crew cut and a blonde rinse; and second-billed Diana Lynn as neurotic heiress Julie Barnes, who has a seriously self-destructive streak that blows hot and then cold with the regularity of a fairly inebriated metronome.

Julie makes a pass at him which, when he turns her down, leads to a showdown with her ‘companion’ Raoul, who gets knocked out for his chivalrous attempt to protect her ‘dignity’. But that’s OK, he’ll get several more chances later on …

Anna Luz’s boss dies on ship and it is fairly typical of this film’s frequent fuzziness and overly elaborate plot that we are never quite sure if he died of a heart attack or of something more sinister. But never mind, because this is when the story (and the film) really takes off – with its arrival in Oaxaca. For all its various contrivances and the various scenes in which the scheming characters – very much in the style of The Maltese Falcon – attempt to get hold of the package, it is the location work that sticks in the mind. Farrow certainly makes the most of the various locations – along with a touristy guide to the sacrificial history of the ruins with Lynn to a detailed history of the treasure that everyone is hunting, something to do with a map in twelve pages leading to gold buried somewhere in the vaults hidden in the ruins. This is just as well, because at this point the plot does become a bit turgid as we try to keep tracking of just who is double and triple-crossing who.

The somewhat heavy-handed plot revolutions are a bit of a surprise given that this is one of several collaborations between director John Farrow and writer Jonathan Latimer. Their relationship spanned 10 films in as many years, including such very fine examples of Film Noir as Night Has a Thousand Eyes (1948), from the classic novel by Cornell Woolrich, The Big Clock (1948) from Kenneth Fearing’s best book and perhaps best of all Alias Nick Beal (1949), a mixture of crime, politics and fantasy that is really in need of critical re-evaluation – here is a complete list of the films made by this nearly forgotten writer-director partnership:

Ultimately the code to unravel the map is broken and the treasure trove is unearthed – at which point Colby does something incredibly stupid, gets shot several times virtually at point-blank range – and somehow doesn’t die. From his bedside he makes a miraculous recovery (I use the word advisedly as Farrow was a major Catholic apologist) and is even able to secure the settlement of the various (frankly extraneous) romantic entanglements. In the final 15 minutes of the movie things do get a bit scrappy – Anna Luz breaks off her engagement and Julie Barnes decides she’s going to sober up and be a good girl after all. At which point her character exits the narrative with no fanfare whatsoever and we get served up a climactic shootout that that was clearly tacked on back at the studio. In fact it was filmed three months after the end of principal photography back in Hollywood as part of re-shoots undertaken at the Samuel Goldwyn lot. It clearly sticks out a mile, though it’s not even remotely as damaging as the kind of post-production tampering that Farrow had just had to endure a couple of years earlier on His Kind of Woman (1951) under the monomaniacal regime of Howard Hughes at RKO.

The new studio scenes are perfectly efficient and offer a bout of fisticuffs among a basement full of antiquities and some extra thunder and lightning added for ‘atmosphere’, but clearly can’t compare with the location footage. We return for one last time to the source of the narration, Colby’s judicial inquiry, to see him off and on to the potential start of a new adventure. The final result is a bemusing mixture that doesn’t quite come off but which is plenty of fun if you don’t mind a wayward narrative and some glaring plot holes. Along with its handsome leads it also offers character actor Sean McClory in one of his best roles – and of course some stunning location work.

DVD Availability: Paramount released this title worldwide in a handsome special edition as part of its John Wayne collection.