Posted on 14 February 2012 by Cavershamragu 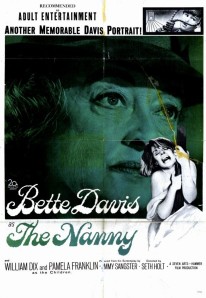 Bette Davis gives a subtle and nuanced performance as the title character in this small-scale suspense movie that deserves to be much better known. It is easy to succumb to the temptation to lump it together with What Ever Happened to Baby Jane? (1962) and the other  excursions into grand guignol that helped revive the flagging careers of such Hollywood grand dames as Davis, Crawford and Stanwyck (amongst others) around that time, but it does the film a real disservice. Although made by Hammer, this is a  restrained study of family grief and emotional dependence painted in shades of grey. It’s a classy film, tackling a challenging theme with intelligence and style, largely eschewing histrionics  …

“There’s no key in the bathroom door”

We begin in sedate fashion with a title sequence showing Davis as she makes her way home through the park where she feeds the ducks and stops to buy some flowers before arriving at an expensive London address. As we cut to the interior, there is a long, meticulously crafted tracking shot as we follow her into the house, past a room where a couple are rowing. She ignores this, puts a parcel in the kitchen, and then goes into her own room to remove her coat. We look at the series of framed family photos on her dresser and then we cut to Davis and see that she is wearing a uniform. She is a servant in the household of a well-to-do family and has bought a cake for 10-year-old  Joey. His mother is in tears, wracked with doubt about his ‘return’, while her husband merely bellows at her in frustration. Eventually he asks ‘Nanny’ to get his wife ready so they can go and pick up the boy and bring him home. The mother (Wendy Craig) is clearly fragile and in the end feigns a headache, so nanny is sent in her place. What is she so worried about? We get an idea from a  brief flashback in which she plays with her young daughter, who now seems to be missing from the house … 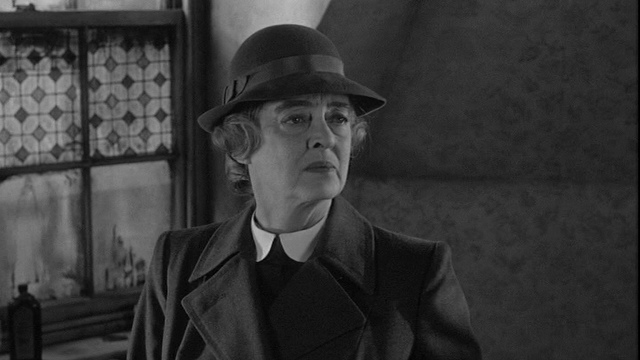 We get more than an inkling that something truly dark is going on when we arrive at the private clinic where the boy has been housed for the last two years.  The exact details are withheld for the moment, but we discover from Joey’s psychologist (a nicely understated cameo from Maurice Denham) that he has been under their care following some unspecified event. Although the boy is apparently still made violently angry when near middle-aged women and tends to be a fantasist, he is being sent home. He has had many of his earlier symptoms remedied (like his refusal to eat) but is still potentially quite disturbed. This is reinforced in a scene reminiscent from the opening of cult classic Harold and Maude (1971) in which a nurse finds the boy hanging in his dorm – she runs away screaming and he climbs down and calmly puts away the rope so he can doubtless play his ‘practical joke’ again once he gets home. He is clearly glad to see his father but is immediately rude to nanny (we never find out her actual name) and refuses to sit with her in the back of the car.

At home he behaves much worse – refusing to eat anything she has cooked, essentially a really destabilising and malevolent rendition of the kind of problem behaviour that any parent is likely to encounter, only much worse and a great deal more sinister. The boy says that nanny wants to poison him and insists on barricading himself in his room at night. He eventually makes friends with a 14-year old girl living upstairs (Pamela Franklin) and tells her coolly, matter-of-factly, that he is blamed for the death of his sister in a bathroom drowning. But of course he blames his nanny, who he says is out to get him for some unspecified reason. She has been part of the family ever since his mother and her sister were children – one of the finest sequences in the film is also one of the simplest, in which we see nanny comb the mother’s hair to try to console her after the latest defeat at the hands of her quisling child. Who is the real child here, who is the parent – and ultimately, what is the truth surrounding the tragic death of the little girl?

Familiar and recurring elements from writer-producer Jimmy Sangster‘s previous Hammer thrillers (for the titles of these, with links to my reviews, see the list below) are all present and correct – these include a drowned body, mentally unstable protagonists released from an asylum, characters being put under psychological strain as part of a terror campaign. plots that repeat the pattern and events of a previous trauma – and a major twist at the halfway mark. These are certainly all present in The Nanny too, but here the effect is quite different and in some fundamental aspects completely reversed, especially when it comes to the major plot twist, which in fairness can’t be discussed but which is not the kind of big surprise that makes you feel cheated. Rather, it opens a new view on the story and is presented very much in this fashion with several interlocking flashbacks to clarify events, very deftly shot and edited together with smart use of sound in particular, to really change how we view the characters and their actions. Where the earlier thrillers were all about plot machinations, surprise twists and scares and shocks, this is a film about a mounting sense of dread, about something awful in the characters’ past that is now being revisited upon them.

“You don’t approve of pillows …”

Depictions of pre-teen childhood in cinema usually fall into combinations of two main types: comic or dramatic coming-of-age stories or more nostalgic reflections on times past. Occasionally though there are more sinister stories, cuckoo-in-the nest studies in abnormality and cruelty. These can vary from the science fiction of Village of the Damned (1960) to the horror of  The Innocents (1961) and inevitably The Omen (1976, et seq). The new film adaptation of Lionel Shriver’s controversial novel We Need to Talk About Kevin starring Tilda Swinton is perhaps the most recent approach to this, though there are other examples in film and literature such as Ian McEwan’s The Good Son (1993), and Patrick McCabe’s 1992 novel The Butcher Boy (filmed 5 years later by Neil Jordan with mixed results). All of these to some extent seem to flow from William March’s 1954 novel The Bad Seed about a child murderer. When Maxwell Anderson adapted it for the Broadway stage the following year it became hugely successful and this was turned into a movie in 1956 and is one the one of the earliest examples of children as being potentially malevolent – and The Nanny is another.

William Dix as the disturbed Joey Fane gives a truly impressive performance, his apathy and potential cruelty conveyed convincingly without resorting to obvious tricks. More importantly he is also able to sustain several important long-ish scenes, his performance not obviously created in the cutting room as is so often the case when dealing with child actors. His scenes with his neurotic mother, his young upstairs neighbour and especially opposite the mighty Davis are all equally impressive. Equally good, perhaps even better, are the scenes with his cool aunt, played by the great elan by Jill Bennett. She comes to stay when the mother is poisoned with something taken from nanny’s medicine cabinet. When the offending bottle found in Joey’s room she takes this in her stride as a mere prank, which is a surprising mild response in the circumstances. However when Joey comes screaming at her that nanny just tried to drown him in the bath, the story quickly becomes much darker as her anxiety starts to grow as she suffers from a heart condition and is clearly starting to be rattled by the boy’s mounting hysteria.

The film was adapted by Sangster from a novel by American author Merriam Modell published under her ‘Evelyn Piper’ pseudonym. That same year another of her novels would be transplanted to London and turned into a movie, Bunny Lake is Missing, which also takes a walk on the wild side of abnormal psychology, though it is a much more obviously tricksy narrative. Having said that, there are also surprises aplenty in The Nanny, mostly in the closing 20 minutes, which also includes a great cameo from Alfred Burke as a local GP working in London’s poorer districts. This is a film that, while it can be classed as a story of psychological suspense, is unlike the other films that Jimmy Sangster wrote and produced for Hammer in the 50s and 60s as it deals with the death of a child and with an even more essentially transgressive idea – potentially of a child as murderer. Taste of Fear director Seth Holt makes a great job of tackling this material sensitively to create a superior and markedly different suspense yarn and gets a terrific performance out of Hollywood legend Bette Davis. Apparently the relationship between director and star was not an easy one, but the fine results speak for themselves. Initially her appearance, with heavily blacked up eyebrows and heavy face makeup, seem a bit too similar to Baby Jane, but this is a much subtler movie that could, stripped of a few genre elements, have been easily made by Joseph Losey and written by Harold Pinter. It’s really that good in terms of its spare, to the point dialogue, it’s adroit and intelligent use of overlapping narratives and a willingness to let restraint be the watchword throughout, even in the dramatic death and attempted murder that occur in its final stages.

Holt demonstrates tremendous skill in his orchestration of the scenes and a meticulous eye in his mise-en-scene that mixes hand-held cameras and complex tracking shots with complete mastery and virtually practically never puts a foot wrong. In addition he also draws performances of great uniformity from a very disparate bunch of actors, including a really credible turn from Pamela Franklin, who had already starred in The Innocents and would go on to play another equivocal youth in The Prime of Miss Jean Brodie (1969). The only false note in the entire film comes, frustratingly, right at end – the story is over, the great emotions have all been expended in a thundering if low-key and slightly ambiguous climax, and now all that should be left is silence – and instead 20th Century Fox insisted on tacking on a boring 60 seconds of explanations for those sitting in the cheap seats in the style of Psycho. It is utterly phoney and was clearly shot after the end of principal photography being dramatically anodyne and flatly lit – let’s not speak of it any longer as it is best forgotten and very easy to ignore.

This was Sangster’s favourite among his own films after Taste of Fear – and it’s easy to see why.

DVD Availability: Although the region 1 release has a slightly sharper and smoother image, the region 2 version also offers a pretty decent anamorphic transfer with the added bonus of an audio commentary recorded in 2006 hosted by official Hammer historian Marcus Hearn and featuring Jimmy Sangster and the film’s script supervisor, Renée Glynne. Click here for further details about her career.

This entry was posted in Hammer Studios, Jimmy Sangster, London, Scene of the crime, Tuesday's Overlooked Film. Bookmark the permalink.